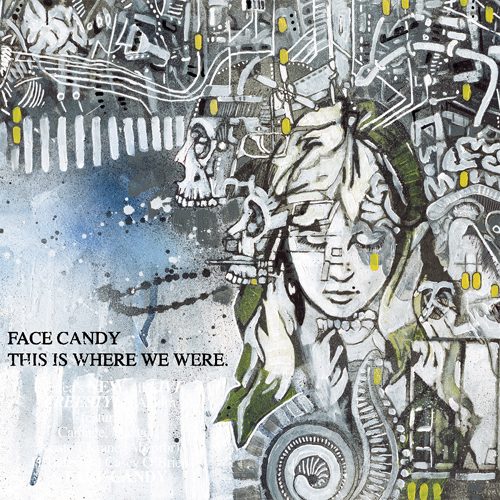 Face Candy :: This Is Where We Were

The infinite monkey theorem has spread throughout popular culture quicker than most mathematical theorems. Most likely the reason for this is the fact that its most common explanation involves monkeys on typewriters, an image that entertains both young and old. Basically, it is embodied by saying that even a room full of monkeys randomly hitting keys on a typewriter would eventually produce the text of a famous Shakespearian play. This relates to the album at hand since it seems the emcees involved relied heavily on the truthfulness of the infinite monkey theorem when making this album. Billed as an entirely freestyled album recorded live while on tour, the concept itself has infinite potential. The fact that it is being released on Rhymesayers Entertainment and is the brainchild of supposedly talented freestyler Eyedea also hype up the expectations for this album. But after just one listen, you won’t care who was involved or what label it was released on since you’ll have no motivation to ever waste another 45 minutes of your life listening to this.

Imagine a semi-talented house band jamming repetitive music sufficient to rap over. Next imagine two wack emcees with little to now flow or freestyling abilities. Then imagine you’re in the back of the club where this is all occurring and in an attempt to make your night feel like something other than a complete waste you cheer occasionally when the raps actually make sense. This sums up â€œThis Is Where We Were,â€ except that if you are listening to the CD you miss out on the atmosphere and excuse to have a few beers. To their benefit, the band isn’t half bad on here and the drummer sounds pretty talented, but that is the only good thing you can say about this.

The raps on this CD are absolutely horrendous in every way imaginable. You got one guy who sounds like your average guy who picked up a mic one day but has no real natural talent and then his sidekick whose flow consists of just yelling really loudly. Combined the two produce some of the most random, simple, and pointless songs I have ever heard. The two can’t even keep a theme within a song. The yeller is mad all the time and every verse he tries to express this. The other one tries to mix things up but every time he realizes he is making no sense he falls back to talking about relationships and repeating the same thing he said in the previous song. They’ll go on and on producing verses that rhyme, but make no sense. Anyone can rhyme two words, but it is a true skill to connect the two words so that the rhyme makes sense. That is not done here. The only entertaining aspect is when one of the rappers actually says something that makes sense, even if it’s only one line. This is immediately followed by a cheer from the crowd who is happy just to hear something that makes sense even if overall it still sucks.

â€œThis Is Where We Wereâ€ is the only fitting title for this album. It’s the only statement that could accurately describe what is contained within. This CD is about 2 rappers and a band and where they were one night when they made an ill-fated choice to improvise a whole show. Outside of that nothing cohesive can be said that would describe this. The rhymes are random, even within an individual song. The album overall has no theme or redeeming value. Overall, the idea has infinite potential but the execution here was abysmal.

Face Candy :: This Is Where We Were
3Overall Score
Music5
Lyrics1