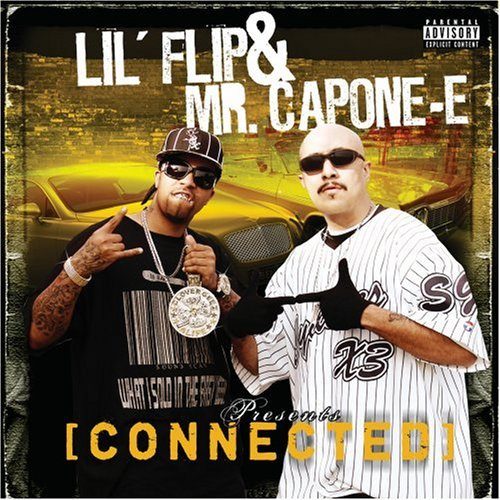 From the West coast to the Dirty South, Mr. Capone-E and Lil’ Flip are underground rap stars with equally devoted cult followings. Flip has blown up a little more on the commercial side with crossover raps like “I Can Do Dat” and “Game Over,” but Capone-E has sold over 500K total records on his own at a grassroots level through Thump Records and its subsidiary Hi-Power Entertainment. If you ask any fan of Lil Rob or South Park Mexican about Mr. Capone-E, they’ll at least be familiar with him and there’s a good chance they’d have one of his half-dozen plus albums. Both rappers have strong support regionally, rap about the street life, and enjoy the fruits of their success; the only major difference between them turns out not to be ethnicity but controversy. Capone-E has been subjected to the same criticism as Ned Holness, b/k/a Carlos Mencia, that he glorifies negative stereotypes of hispanic people for his own personal gain while he may not even actually BE hispanic.

I don’t pretend to be an expert on Mencia or Capone-E’s family tree or cultural upbringing, but in the latter’s case I have a hard time believing he’s a fraud. Of course it’s possible for someone to fake a latino slang or accent, but one has to ask if that’s true how it would have really benefitted Capone-E, who after seven years on the scene has not had one gold or platinum record. So for all those people asking whether Capone-E’s hispanic or Pakistani (and why the hell can’t he be BOTH) really ought to ask why they’re so concerned about it. Unless Capone-E makes a ridiculous claim like that he speaks for all latinos everywhere and that his rap represents their lives word for word, it’s a pointless thing to beef about. In fact on tracks like “Gangster Trippen” he seems much more concerned with repping Cali and street warfare than his individual ethnicity:

“Welcome to the West coast motherfuckers
We gangbang in Cali, shootin at punk suckers
My name’s Capone and I roll the streets
G’d up to the feet up with the Levi’s creased
All eyes on me, I’m the West resurrection
Catch me in the G-ride steady dippin, did I mention
I got a fetish for this gangbangin fight
Braced to kill at will, I stay fuckin tight
All the homies slanged dope so I pushed it
All the homies callin hits so I done it
Now I’m just a little older with a mind of my own
Raise like a cyclone, listen to the microphone”

By now you already know what Lil’ Flip reps – his Cloverland neighborhood in Houston, Texas. He’s a funny guy who loves being known as the ‘Freestyle King’ but is also as hard as they come and not to be fucked with “On Da Block”:

“I don’t care about your group, they ain’t real
Cause y’all been makin music I can’t feel
You claim you a thug but you not one
A gun license in my wallet, I got one
The game over, the Range Rover all brown
Since I shot Las Vegas, you wanna call now?
Calm down, cause the King in the building
My chain blang, pinky rang one million
Nigga – I’m rich as fuck
In fifty-two states I can get you touched”

I’m not sure about Flip’s math there, unless he’s counting Puerto Rico and Guam as the unofficial #51 and #52, but nevertheless it’s the hard Lil’ Flip that hip-hop heads have come to know and expect. What’s unexpected is these two artists collaborating together, or how well it tends to work on the whole. Individual tracks lack producer credits, but the beats as a whole are attributed to DJ Fingazz and Mr. Criminal, and they are solid throughout. “Where I Stay” sounds like an updated version of David Banner’s “Like a Pimp” and is the perfect beat for each rapper to talk about their respective neighborhoods. The smoothed out “Hustle for the Same Thing” lives up to the title, as a Troutman-style vocoder hook unites the two in their common pursuits of being “addicted to cash and allergic to haters,” one which Flip says is the same everywhere from Houston to Amsterdam. (I’m sure a lot of chronic smoke is in the air in BOTH places.) “King of Da Streets” sounds like a Rocky movie straight from the hood, triumphant and puglistic in their combined cocky flows.

The “Connected” gimmick largely ends there as the rest of the album’s songs are solo joints by either Lil’ Flip or Mr. Capone-E, but the fact they are sharing an album together and rapping over the same producer’s beats gives it unity even when they’re not dueting with each other. Flip’s songs still maintain their uniquely Houston identity though, with tracks like “What You Know Bout the South” and “H-Town” that would be just as much at home on his own discs, while Mr. Capone-E keeps it trill in his own way with the heavy-handed 2Pac inspired “Ballad of a Soldier” and the snappy up-tempo “You Know My Name.” Either artist would shine on his own CD but “Connected” works surprisingly well in introducing each MC to the other’s fanbase, and both groups will come away with a newfound respect for the other. Until either one drops a new album this year, you should get yourself “Connected.”