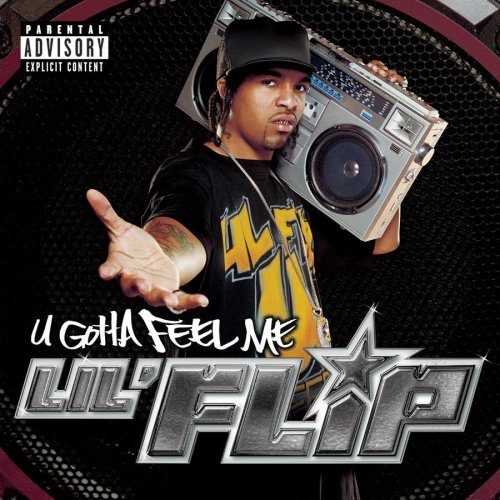 Double albums, especially in cases where they aren’t necessary, are all the rage in hip-hop right now. One week ago Master P released his new album “Good Side Bad Side” as a two CD set when the total amount of material combined was only a minute longer than the accepted standard length (74 minutes) that a CD can normally hold. Lil’ Flip’s “U Gotta Feel Me” fares slightly better in justifying the double disc, with the first half of his presentation clocking just over 46 minutes and the second half at just under 41 minutes. That’s 87 minutes total, and to Flip’s credit that’s not padded out with skits or interludes like P’s total was. Still I have to question the division of material between the two. Couldn’t Flip have put almost all of the songs on disc one and left the two “Screwed” mixes on disc two, along with a bonus track or two? Since most people tend to presume “double albums” are bloated or full of filler material, it would make much more sense to market this as a Lil’ Flip album with a “special bonus disc” of extras instead.

Lil’ Flip doesn’t have to release a double album to impress people anyway. His 2002 release “Undaground Legend” already succeeded in doing that, with catchy songs like his “I Can Do Dat (Remix)” and the smash hit “The Way We Ball” making him a household name nationally. Up until that time, Flip had been a regional Southern favorite hailing from Houston, Texas. Appearances with the Screwed Up Click had raised his profile, and the independent release of “The Leprechaun” on Sucka Free Records shocked industry executives who saw how many units it moved at retail. It was inevitable at that point that Flip would be signed to a major and make a big splash coast to coast, which is exactly what he did. His challenge in 2004 was to keep that momentum going with a hot new album and single, and “Game Over” certainly has the latter covered. It’s hard to say what’s more surprising about the track – a Southern icon linking up with indie hip-hop producer Nick Fury, or just how fly it is hearing Flip rap over a beat composed of Pac-Man sound effects:

Flip’s reputation is for a flow that’s relaxed, but not too slow, with lines that are occasionally simplistic, but also clever and humerous. Combined with a self-confident personality and an engaging vocal delivery, he emerges from a crowded field of contenders in the Southern rap scene as both the self-proclaimed and real life “Freestyle King.” Flip just needs engaging tracks to bring his rap vision to fruition, and “U Gotta Feel Me” comes loaded with them. “I Came to Bring the Pain” has the expected Method Man sample, but it’s the hard Play-N-Skillz beat and guest raps from Ludacris and Tity Boi that make it work. PNS contributions can be found throughout both discs, but other producers also squeeze in to get their shine on. The Heatmakerz use a sped-up Kanye West/RZA style R&B sample for “The Ghetto” that’s highly effective. “Represent” has a crunkdafied DJ Paul & Juicy J beat, and it’s no surprise that Three 6 Mafia appears on the song as a result – David Banner’s guest appearance is though! Red Spyda hooks up the acoustically friendly “Check (Let’s Ride),” while Synphony handles “Sunshine” – a song whose beat and sung hook by Lea seems tailor-made for the quiet storm.

Although shorter in length, the second disc is no less loaded with fresh material. “We Ain’t Playin” features an all-star selection of Southern MC’s from Baby D to Killer Mike, with a slow pounding beat by the Oomp Camp that’s guaranteed to find the song reverberating out of trunks nationwide. “U Neva Know” is a suprising but fly duet between Flip and well known Dogghouse artist Butch Cassidy on the hook, with Carl So-Lowe providing the appropriate G-Funk. Red Spyda shows up again on “Where I’m From” which is another surprising Flip collaboration, putting indie hip-hop’s rising star Grafh in the mix with Gravy and Will-Lean. David Banner laces the ultra-hardcore “Ain’t No Nigga” at the disc’s end, and of course hot tracks produced by Play-N-Skillz can be found all between the rest of these songs.

Taken on the whole, “U Gotta Feel Me” by Lil’ Flip is another quality album from the Southern rap phenom, who this time around seems open to experimenting with beats and MC’s not traditionally perceived as part of the South’s rap scene. Flip may be spreading his wings, but he never flies far from home and returns time and again on the album to the witty style and headdy beats that fueled his rise to fame in the first place. Whether he’s bringing the South to the East coast, the East to the South, or dope hip-hop to all players nationwide it doesn’t really matter. If you already know Flip, this release won’t dissapoint you. If you liked “Game Over” and bought it on the strength, this album won’t dissapoint you. If you want some new shit from a Southern rapper who trades more in wit and good times than going overboard with cliched thuggery rhymes, you DEFINITELY won’t be dissapointed.