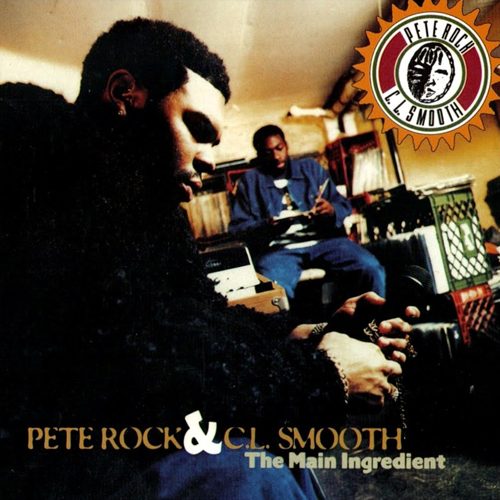 Being a fan of Pete Rock is a glorious luxury. Seeing the name on the production credits is like satisfaction guaranteed, and with a catalog so vast as his, it’s almost too easy being a religious fan. Yes, his choice in emcees has always been questionable (some maintain that “Petestrumentals,” a 2001 instrumental album, was his brightest moment), but good lyrics on a Pete Rock track are about as important as the cherry on top of your decked-out banana split. Luckily, C.L. Smooth is far from wack, and his partnership with the Soul Brother resulted in some of the most memorable hip-hop of the 1990’s.

Their second and final album, “The Main Ingredient,” was a success, but going on thirteen years since its release, it’s sadly become something of an overlooked gem, though it’s easy to see why. 1994 was a tough year to shine, with “Illmatic” and “Ready to Die” re-writing history books and bringing what purists call the “golden era” to a magnificent, unrealistically awesome finish. Pete Rock was just another face in the crowd, but “T.R.O.Y.,” the song that so often comes to mind when mentioning his name, is what kept him and CL’s other work in the shadows. For those who don’t know, it is a sweeping masterpiece, legendary enough to bump heads with the greatest compositions of ANY musical genre, and is often cited as the greatest song in hip-hop history.

With the exception of their magnum opus, it has been debated that “The Main Ingredient” was indeed a step up from the classic debut “Mecca & The Soul Brother.” Mechanically there can be little argument. By ’94, Pete Rock’s craft was as sharp as anyone in hip-hop production, his sampling ability knowing no boundaries, often borrowing from several different sources to create a single loop. “The Main Ingredient” shows this in full effect, whether it be in manipulating segments of soft rock, jazz, soul, funk, or some wacked out noise from an old movie.

The jazzed-out neck-breaker “I Get Physical” perfectly illustrates Pete’s genius at work. At first listen, it’s hard to notice the many intricately arranged samples that compliment his central melody; guitar twangs, vocal excerpts, trumpets; but they’re there, working together to make a certified banger. Bob James’ sample-whore “Nautilus” is rocked to hell and back on “Sun Won’t Come Out,” and as if that wasn’t enough to knock you on your ass, peep how the Soul Brother flips BILLY JOEL on the song’s outro. The album is bass-heavy, likely influenced from the “hardcore” sound previously made popular by Black Moon, but instead of the samples being drowned out, they’re only brought more into the forefront. It’s as full and colorful as expected, but can be sparse, and with intros and outros complimenting every track, it never grows tiresome.

Of course with the mighty PR bringing this much heat, it’s hard for a standout track to even exist. This is hardly a problem; the stellar first half of the CD seems to match each gem with next one; but the rapping does little to heighten the experience. C.L. Smooth’s skill was always severely underappreciated and overlooked, especially considering what a silky, natural flow he had. In truth, his stage name is among the most appropriate in rap history. Still, his subject matter was rarely up to par with his flow, or PR’s tracks much less. Making love and his amazing body are generally the main topics worth discussing, if not a confusing obsession with caramel and other confectionary treats. And it doesn’t help that Pete Rock was as bad at rapping back then as he is today.

Just when you think Pete took a page from Primo with the off-kilter “Worldwide,” things get super soulful once again with “All the Places.” Just when you think “Carmel City” can’t get any funkier, he makes scratching a WHISTLE sound like the sickest thing ever. “The Main Ingredient” oozes replay value, even if C.L. doesn’t make it much easier to listen through. He still sounds good, but one starts to wonder how much of that has to do with his immortal maestro. It’s not his best work, but in the end that’s probably the scariest thing of all.