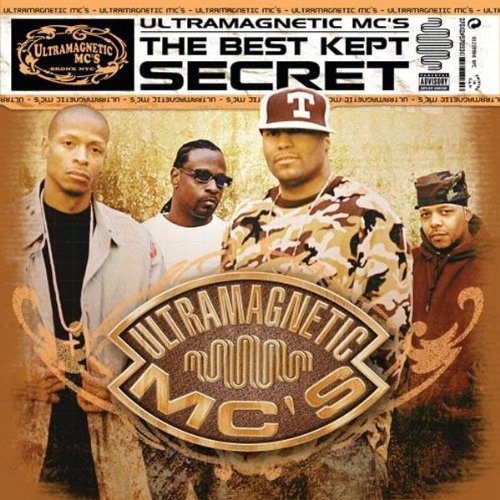 Back in the 1980’s when Ultramagnetic MC’s first started dropping singles to DJ’s and radio stations on the East coast, their chopped up sampling techniques and futuristic rhymes signalled a changing of the guard in rap. You could even in fairness argue that 1986’s “Ego Trippin'” was the start of the new schoolmovement, with Kool Keith and Ced Gee openly taking potshots at “Peter Piper” rappers with their “childish rhymes.” There was nothing SECRET about what they advocated – it was time for rap to go to the Next Plateau and evolve beyond the familiar but unimaginative rhyme stylings of Kurtis Blow, Busy Bee and the Sugarhill Gang. While the mainstream stayed stuck on Fresh Prince and the Fat Boys, underground artists from East to West reinvented what rap music was and could be, and a new generation of MC’s ushered in rap’s golden era. These days we look back and fondly remember records by Eric B. & Rakim, Big Daddy Kane, N.W.A, Ice-T, De La Soul and the Geto Boys among MANY others, but it took a few artists who were willing to break the ice first and show that the only limits to a beat and a rhyme were the infinite power of your own imaginaton, all while “Travelling at the Speed of Thought.”

In a career that has spanned three decades since, Kool Keith has gone beyond being the vanguard of a new era to being an auteur of the odd, existing in an era of his own creation in a dimension far beyond the understanding of mortal men. When Keith chooses to break through our ionosphere and rocket his raps towards human ears, his genius often gets lost in translation between verbally diarrhetic torrents of doo doo. Keith seemed to keep his wilder impulses in check during Ultramagnetic’s 10 year run from 1984-1994, but as the group dissolved and went their seperate ways Keith chose to obsess over every bizarre fantasy in his mind on wax. By now you’re familiar with the results, which ranged from incomprehensibly brilliant toself-indulgent and disturbed. Keith was anything BUT secretive, seeming doggedly determined to take listeners on a voyeuristic ride through his uncensored mind, leading the observer to wonder whether Keith was a madman or just crazy like a fox. Thoughts of an Ultramagnetic reunion seemed unfathomable, as there was just no way you could reintegrate a larger than life ego like Keith’s into the confines of a group, where in theory ALL members are supposed to shine – not just the craziest.

Nevertheless after several aborted attempts like a “B-Side Companion” in 1997 and a “Make it Rain” single in 2001, Ultramagnetic finally put their differences aside and got together in the studio to record “The Best Kept Secret,” which hit the streets in early 2007. The album’s title is a clear reference to Ultra’s iconic underground status in the 1980’s, where 12″ single after 12″ single set the rap world on fire while they remained largely invisible to mainstream culture as a whole. There’s one problem here – no matter how much Ced Gee, Moe Luv and Kool Keith (original member TR Love is notably absent) want to recreate 1987, it’s no secret that they’ve all changed drastically over the last 20+ years. Oddly enough it’s Keith who seems to have the easiest time reverting back to the ways of old, managing to recapture the magic of his pioneering rap flow in brief spurts on songs like the Moe Luv space-funk bomb “Mechanism Nice (Born Twice)”:

“I’ma take these ward, Ultramagnetic release the vinyl
and competitor’s limo drivers come to the Bronz from Connecticut
A legacy that was born, since KRS and Scott LaRock
The flow is hard to jock, with the formula
Who can stop the UG controllers from droppin bombs on the block?
These guys really think they stars on the block
I move in right after ya, sign your shit like Metallica
You would think I came with drums and a band
When the crocodile step on your drawings you wouldn’t understand
You would become a remodeled fan
It’s time to let America know you tell Uncle Sam we jam”

Ced Gee on the other hand seems completely lost. To call what he does on “The Best Kept Secret” rapping is almost comical. He doesn’t go on-beat off-beat, he refuses to acknowledge that there is even a beat to begin with. It’s a shame quoting these lyrics from “Party Started” won’t do my point justice, but the best way to get the picture is to imagine Ced standing in a television studio looking at a teleprompter, attempting to keep up with the music as the words scroll by on the screen but simply being unable to stay the course; and instead of reshooting the scene the producers just decided to let the beat keep rolling and slow down the teleprompter hoping Ced will catch up and get back on track. He never does:

“Uncork the champagne, dawg let’s get it poppin
Boy it’s a lot of stars up in here tonight
But we the ones that’s gon’ get it rockin
You know how we make moves, when all the hits start droppin
We get it live up in here, everybody heads boppin
All the cornball cats, is clockin
Watchin what we do, so they can learn how to make moves
They copyin us line for line, that’s what the fake cats do
While all my live niggaz, just makin they own moves
They doin it big, they doin it right
They spared no expenses son, they gon’ shine tonight
Aight? Yeah”

Aight? NO. Listening to Ced’s awkward stilted flow is a test of one’s patience AND sanity. This can not be understated – Ced Gee is now HORRIBLE on the mic. The irony is that it puts Keith’s myriad rap styles over the last 15 years into perspective, because no matter how bizarre or scatalogical he got Keith still at some fundamental level recognized his raps were MUSIC, and was able to bend his flows into a pattern one could discern as such. Putting the two on the same track is like night and day, although tracks like “Vibrato” prove Keith has not given up his penchant for the weird.

Keith: “Give me twenty
A Mexican cat sold me the turtles
Pick up the greens and purples
Challenge me, your academic pants get hemmed up like Urkel’s
Your eyes get tired from rappin against me with dark circles
You ever heard of Tommy Purple’s, or Larry Woerfel’s?
You don’t know? You don’t want it from Johnny Burko’s
I’m the top, you the robin, and the pigeon
With the seed, you’re all jerkles
I lean on your freckles, with the deckles
I get hype, I got the workles
You caught up with the herples
A new disease, you get the nerbles”

Ced: “Dawg it’s been a long time son
Since you’ve been blessed, by a Ced 16
The vocab is still exquisite
Only a chosen few, know what I mean
Dawg I still spit fire
My words erupt like gasoline
No time to waste on chickens, in dirty jeans
With cheap hair weaves from Billie Jean’s
Ma you ain’t puttin disease in my spleen
I’m on a mission you see
Don’t want you hang around me”

Perhaps the worst part of Ced’s rapping is that even if he were able to stay on beat, his rhymes would be more simplistic and cornball than the “childish rhymes” he made fun of back in the 1980’s. He raps “Cats feed off me, dawg they bite my words/y’all niggaz is phony, you cats is birds” on “Super Spellbound,” but I have a tip for all aspiring rappers out there – bite from Ced Gee here at your own peril. In the end though it’s not Ced’s superwhack rapping that undermines “The Best Kept Secret,” it’s a complete lack of musical dopeness in comparison to underground classics like “Critical Beatdown” and “Funk Your Head Up.” Only one out of every three songs on this 14-track CD is a banger, and even that ratio is being generous. Things start out well enough on Ariel ‘The Cartel’ Caban’s beat for “The Plaques” and then quickly fall apart. Keith’s self-produced tracks are often to blame – “Late Nite Rumble” is a repetitive beat with no structure, and “Pop Bottles” would be more at home on one of his limited release “Commi$$ioner” albums. When Ced Gee staysBEHIND THE BOARDS he nearly saves this album, producing smooth tracks like “Porno Star Part 2” and old school throwbacks like “Ain’t it Good 2 U.”

The saddest thing about “The Best Kept Secret” is that all of the elements to make a great hip-hop album are present here, but they are not being utilized correctly. As much as the other Ultra members might hate to admit it, Keith is the best rapper in the group and always has been, so the focus should have been almostENTIRELY on his rap. This would be doubly advantageous in that it would keep Keith on the mic and away from the production, and it would keep Ced on the 48-track and away from the microphone. Moe Luv proves he can still rock it out on the beats, but is utilized far too little to be effective. In the end it may be best that this Ultramagnetic album remain secret – it was released with very little fanfare and for the careers of all involved they should leave it that way and rethink the formula. It’s not too late for Ultramagnetic MC’s, there’s reason to believe they can still make an impact as a group, but Keith’s interest will undoubtedly wander before long and he’ll go back to making songs about gorillas masturbating porno star queens with cucumbers. Even for the die-hard Ultramagnetic or Kool Keith fan, listener discretion is strongly advised.