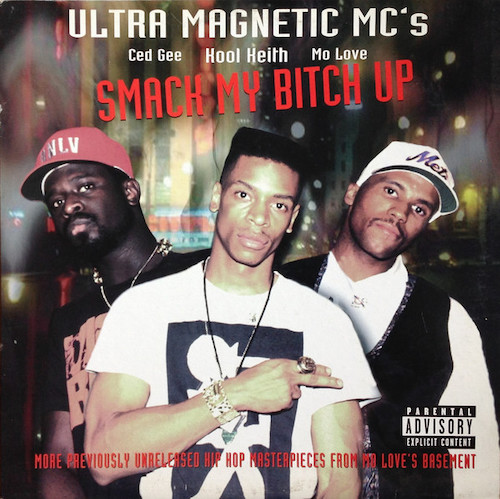 Smack My Bitch Up

Ultramagnetic MCs :: Smack My Bitch Up

There are no shortage of Ultramagnetic M.C.’s albums chronicling “lost” or “rare” tracks by the famous New York group. One thing they seem to have in common is a lack of unity in deciding how to punctuate the group’s name — adding in or taking out apostrophes and periods at random. With “Smack My Bitch Up” we have yet another variation, as this release eschews BOTH, although the always reliable Wikipedia assumes this is the correct version. Whatever. If you say “Ultra” or “Ultramagnetic” chances are a rap head will know who you are talking about, and if they do they probably know that panning for Ultra ore has resulted in both valuable metal and fool’s gold.

This particular attempt is a frustrating mixture of both. It may sound worthwhile to save “Mo Love’s Original Poppa Large” mix for posterity, but compared to both the “Funk Your Head Up” version and the superior “East Coast Mix” from the music video, this one is garbage. It sounds like a test demo recorded on a four track on a night where nobody was that into trying hard (or at all). Maybe the source material degraded before it was saved, but whether it was this rough before or after decomposing there’s only one saving grace — a slightly alternate version of Kool Keith’s rap with a few extra bars. That’s it. He’s so unenthusiastic here I’m not even sure that can justify it. It’s like they were getting ready to leave the studio and someone said “just one more take” so he reluctantly went back in the booth.

The title track will arguably be the reason most people want this album, as it’s a Keith Thornton phrase made (in)famous through sampling over the years. The problem is that it has been archived before, and including it again here suggests that whoever was sifting through Ultra’s unreleased records was running out of shit to share. “Positive Beams” would not have gotten the same recognition or sales if it was the album title, but it’s the more interesting song. It’s clearly not ready for commercial release, but even in this rough state it sounds like a lost track from the “Funk” recording sessions, and had it been polished up it would’ve at least been worthy of being a B-side to a twelve inch single.

If you want to hear Ultramagnetic’s take on “Hyrda” may I recommend “Dog This Is For You” to you? The rough quality will make you want to listen to Black Moon’s “How Many MC’s” or EPMD’s “Underground” instead though. I’m not sure the “remix” of “I Like Your Style” differs enough from the “Funk Your Head Up” version to make it worthwhile, but it’s probably the most well preserved track here. It certainly beats the rambling and not so aptly named “TR Love the Superstar Freestyle” though. He was such a third banana at this point for Ultra that he’s not even pictured on the album’s cover. When you think of Ultramagnetic you think of Kool Keith first, then Ced Gee, and possibly the late Tim Dog. Moe Love and TR Love come last.

I wish I could be more enthusiastic about “Smack My Bitch Up” but this out of print album now commands substantial amounts of money on compact disc and ridiculous sums for a vinyl copy. It’s worth a quarter at a garage sale, or maybe a dollar in a Half Price Books bargain bin. The current asking price is disproportionate to the quality of the material found within. It’s like paying thousands of dollars for a copy of Cheetahmen II only to discover that the game is buggy, glitchy, and essentially unplayable. In fact “unplayable” is a good word for this album in general. Even the most ardent Ultramagnetic fans should take a pass on this one.