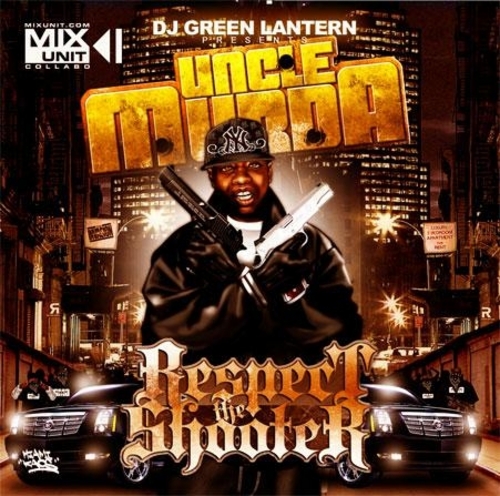 Uncle Murda’s latest mixtape takes Jay-Z’s lyric to heart and concentrates on all the shootings he claims to have been involved in. With a name like Uncle Murda it’s no surprise that this rapper revels in violence and glorifies the lifestyle but what is surprising is the high profile guests and co-signers Murda has. The mixtape is presented by DJ Green Lantern, who usually does not lend his name to up and coming mixtape rappers. Murda also boasts of guest appearances from Wyclef and R. Kelly. Regardless of the big name support, the question remains whether Uncle Murda is actually a gifted rapper or whether he uses his reputation to sell records.

The mixtape opens with a snippet from a news cast describing an alleged member of Uncle Murder’s GMG group shooting at the cops and fleeing the scene, eventually getting away. Murda follows this with “Don’t Try To Apprehend Him” where Green Lantern shows that he’s pretty much a one-trick pony when it comes to beats following the blueprint from “The Champ Is Here” for the beat. The message in the track is that Murda doesn’t trust the police and would rather shoot than face a potentially corrupt cop. I’m usually the first to get behind a cause behind corrupt cops, but to this point Uncle Murda hasn’t garnered enough of my respect and hasn’t presented his message clearly enough for me to agree with him. At one point he says “Malcom and Martin must be turning in their grave” and I can only wonder whether they’d be doing it because of the state of the world or because of Murda’s message. Next up is the first of a series of hilarious interview clips from Uncle Murda’s appearance on KROC radio. Why any publicist would schedule an interview with the two DJs who sound like complete squares is beside me, but seeing Uncle Murda clash with two conservative disc jockeys is hilarious.

After this “Respect The Shooter” spirals into pointless violence which is the reason I tend to ignore any political themes Murda tries to jump on. On “The Name They Gave Me” Murda proclaims “I’m the realist kid I know, Killed a few kids I know,man that’s how I get for that dough.” “Startin Shit for No Reason” is self explanatory and only solidifies that someone like Uncle Murda would be shooting at the cops even if they were 100% non-corrupt. The rest of the album just repeats the same concept on every track with a somewhat different beat. Uncle Murda kills people, he says he does it for survival and to get money and that’s supposed to make it O.K. See, I’m used to cheering for the bad guy, from Scarface to Alonzo on Training Day, I was pissed as hell when I saw the bad guy die. But the difference is that Uncle Murda does little to nothing to get the listener to want to root for him. He tries to hint at the usual “it’s hard in the hood” reasoning behind getting illegal money but when you hear him he comes off as the type of person who’d revel in violence even if he was handed the world. So when you have a gangsta with no redeeming qualities it’s near impossible to cheer for him. Uncle Murda’s apparent love for violence also makes it almost disgusting to hear him try to take up a noble cause on tracks like “Clap At The Police Music.” By Uncle Murda’s own logic, it don’t matter if you survive a corrupt cop cause chances are after that you’ll run into Murda and he’ll merk you for your money.

“Respect The Shooter” is an exercise in violence with little to no redeeming qualities. Uncle Murda isn’t that gifted of a rapper, delivering his verses with no originality both lyrically or stylistically. If he found a way to talk about the violent street lifestyle that was new or at the very least interesting he’d be much more tolerable. Musically, Murda’s beats never get past the average which also detracts from the overall product. To add insult to injury, after the release of this mixtape MixUnit stopped selling mixtapes online because of the Drama and Don Cannon arrests. So even if you did want to peep Uncle Murda for yourself, you’ll have a hard time doing it unless you’re on the East Coast.