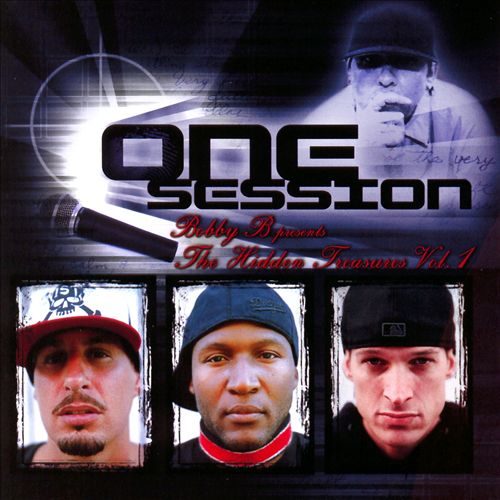 One Session :: DJ Bobby B Presents – The Hidden Treasures

Tristate, Minus One, & Cringe. Every review about a group you’ve never heard of before has to start somewhere, and for One Session’s “DJ Bobby B Presents – The Hidden Treasures” I decided to start with the names of the artists in the crew. Cringe is the producer and a former member of the group Da Nayborhoodz – quite honestly I’ve never heard of them either. Minus One is not to be confused with the Chevelle-sounding group of the same name. He’s a Los Angeles native who’s been flowing for years, much like his partner Tristate. Of the three ‘State might be the best known, as he’s appeared on West coast mixtapes for years rhyming with the likes of Ras Kass and King Tee. The national debut of One Session is presented by DJ Bobby B, best known for his years of work with the Kottonmouth Kings. Considering the Kings are the premier artist on Suburban Noize Records and One Session’s album is being released on said same, the connection shouldn’t come as much of a surprise.

Familiarity with the label the rappers affectionately called SubNoize might be helpful to listeners of this album. Johnny Richter raps for the Kottonmouth Kings. Big B is from the SubNoize group OPM, although they’ve successfully brought him out as a solo rapper with albums like “White Trash Renegade.” The Dirtball is yet another SubNoize artist with his own solo album, this one called “Pop-A-D-Ball.” One by one all of these guest artists on “The Hidden Treasures” are either deeply tied to the label or outright signed to it. Therefore I’m going to be frankly honest with you the reader here – I’m severely handicapped reviewing by my complete and utter lack of knowledge about SubNoize. In fact to be perfectly honest I thought the Kottonmouth Kings were somehow tied to or signed with Insane Clown Posse’s Psychopathic Records up until writing this review. I don’t know where the hell I got that idea from. SubNoize is clearly just as big as Psychopathic though, with a large roster of artists and a devoted cult following which ensures their future profitability.

With what little I know about the artists and their label, the only thing left I can do is discuss the music on “The Hidden Treasures” and tell you what it sounds like to me. First batter up – the music. Even though Cringe is billed as the producer on their website One Session collectively take credit for the music behind these cuts on all but two tracks. “Change Things” featuring female vocalist B-Rhaka is done by Reno, and “Listen Up” featuring Onique is done by P. Nice. The consistency enables a style to emerge on “The Hidden Treasures” that’s an enjoyable mixture of Fort Minor and Cypress Hill. This is most evident on the slow paced rumble of “I Need You,” the smooth “buddha blessed and bound for success” flow of “If This Were,” the strummed guitar and melody of “Get Cash” and the old school hip-hop attack of “I (Blame it On)” featuring Hannah B. Basically, the music is on point.

One Session have a lyrical style that they describe as “easy listening, hardhop music” engineered to make listeners “get up out of your seats and move with the movement.” It’s focused and clear, if not overly complicated. One Session would be great background sound for a party or at a club, since Tristate and Minus One both have a competent flow and breath control but don’t do anything that would take your attention away from getting a drink at the bar or pressing flesh with the opposite sex. As an example I’m going to use their song “We Back,” which has a thumping bassline and a sample reminiscent of kung-fu movies.

“Sometimes I wonder what we writin for, fightin for
Fuck it y’all the game ain’t even tight no more
But this is what I do y’all, this is the life
A street warrior with words and I blast on sight
No remorse, motherfuckers gotta pay the cost
And if you floss then I guess you gotta take that loss
In the zone and I’m focused can’t leave it alone
Like the mic keeps callin when the beats is on”

You could call One Session’s steelo “pleasantly inoffensive.” They’re not going to say or do anything that makes you think they’re totally whack, but you won’t be left with the impression these rappers would blow on their own as soloists. That’s not to say they wouldn’t move units if Suburban Noize did so though, because the loyal supporters would stick with them, especially if Cringe did the beats and Bobby B did the cutting and scratching. “The Hidden Treasures” is on the whole a pleasant surprise. I don’t know if they’ll move beyond the rap niche of Mike Shinoda style tracks they’re in to reach a more mainstream rap audience, but those who already like that sound won’t be mad at this album. Take a listen for yourself to see if you want to get down with their “hardhop” style.