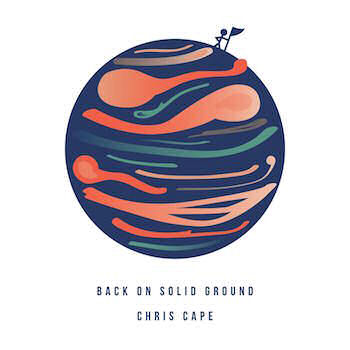 Chris Cape :: Back on Solid Ground

A little while ago Chris Cape hit me with a personal e-mail, following up on a conversation that started on our Facebook page, asking how to submit an album for review. He requested that we keep the download links private and not publish any coverage before “Back on Solid Ground” was commercially released on November 10th. As he’ll no doubt glean from this review he had no reason to worry – we’ve been so overwhelmed with submissions that it wasn’t getting done any sooner than this.

I should clarify though that when I say “commercially released” the only place I can find it available in any form is through his own website, and on there it’s being given away as a free mixtape. Perhaps between the time he contacted us and the time he was satisfied with the final mixdown, he judged his prospects were better if he gave away the album online to pick up more exposure. According to Wikipedia thoughthis is his third release, so you’d think the Cape Town, S.A. native would have navigated the path to Amazon style retailers. He certainly doesn’t have an accent that would make him regionally limited in exposure – and if it weren’t for that bio you wouldn’t know it – he sounds like any rap kid from the U.S.

The above example is not from “Back on Solid Ground,” but from poking around his YouTube account none of them seem to be posted. That may be because tracks like “Runnin'” featuring Brittany Dilkes are in fact built directly over the songs their titles reference – in this case the famous hip-hop classic by The Pharcyde. That may be the other reason Cape didn’t release this commercially – there’d be no way in heck that Cape could clear all the samples especially as a self-produced and self-distributed artist. I don’t know what the Sony Xperia song competition is that he references in the description of the video above, but I suspect he was hoping to win it and get some funds together to hire a quality producer. Otherwise we’re left with songs like “Brixton” where he’s rapping over U.G.K.’s “International Player’s Anthem.”

Here’s where we stand with Chris Cape. I’m not going to be able to score the music for this album/mixtape because I’m not sure what tracks are original. His press release made the mistake of saying he “wrote the songs, recorded all instruments and vocals, produced and mixed the tracks independently” and even if he only meant that applied to the ORIGINAL songs he didn’t differentiate between them with any kind of liner notes. I’ve got to just throw it out. As for his lyrical style it’s a little basic but on tracks like “Roth and Roll” he shows potential he can build on if he gets certified original beats.

“Every artist I know suffered delusion
I’m one of them so the only conclusion
I can draw is to keep making my fusion
of rock rap and discipline until it brews in
your eardrums, hear the sound of waves oozin
through the, nookies and crannies…”

Though his Wikipedia bio referenced above seems to have generated a little controversy (it’s that whole “notability” crap rearing its ugly head again) and may be gone by the time you read this review I’ll give Cape props on three accounts: he’s earnest, he’s polite, and even if he did write his own bio it shows he’s out there trying to hustle and get noticed. The next steps are up to him – tighten up the raps a little more, get some quality production either locally or abroad, and come back with a product he’s ready to put out commercially. We’ll be waiting.