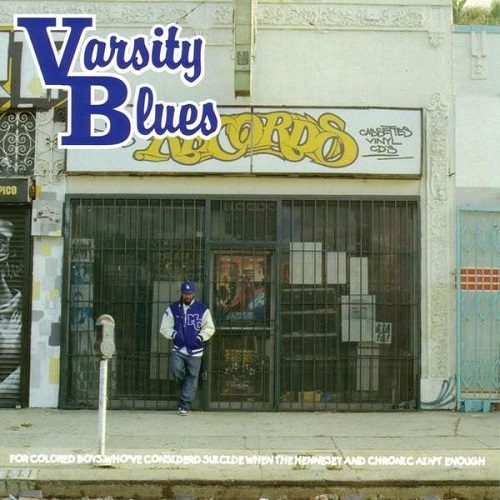 During his stint as lead vocalist for Buckshot Lefonque, Frank McComb made an interesting and arguably accurate statement on the title track “Music Evolution” where he pointed out that “bebop and scattin’ was an old school flow [of rapping].” Indeed, there are many connections to be made between blues and hip-hop: in terms of content, ideas of loneliness, struggle and pain permeate both genres; in terms of musicality, it is no secret that several hip-hop artists sample blues songs, and it is also true that several blues musicians have done their part to shorten the musical divide between genres. Standout examples would obviously include Black Thought of the Roots, who can bounce effortlessly between rapping and scat-talking, and Andre 3000 who’s latest hip-hop forays dabble greatly in blues (amongst others) influences. Such artists blend the sharp diatribe and witty rhetoric of rap with the heartfelt emotions spewed by blues melodies, and in doing so reveal the plain logic that one definitely had a role in helping to bear the other.

Not to be excluded from this adventurous group of rap artists-cum-blues crooners, Murs dropped his name into the mix with a short hip-hop EP in 2002 in which the beats and lyrics are based solely on the principles of blues music. And it makes sense. Murs is known for being a frank, honest and plain-spoken rapper with insights that rival those of his friend Phonte (of Little Brother fame) and skill to articulate that easily in a song. In addition, he is self-admittedly a rapper of a different ilk (re: “I’m more Coldplay than I am Ice T”) who is willing to diversify his music and challenge hip-hop’s seeming lack of creativity. Hence, combining his knack for story-telling with blues-worthy personal experiences, and dropping it over some despondent, melancholic guitars, Murs sought to tap deeper into his introspective self with “Varsity Blues” and creates something most definitely worth revisiting a while after its original release.

First things first: Murs does not sing on this album. Whether it was an understanding of his limitations despite his wanting to sing or simply being uninterested in doing so, it was a good choice as the EP does not succumb to a forced feeling and remains consistent to Murs’ trademark personality. This is immediately reflected in the album starter and title track, “Varsity Blues.” Produced by Mum’s the Word, the beat features a guiding bass line combined with several synth loops that create an eclectic blues mix to back up Murs’ stories of the troubled hustler, the boyfriend in fear of commitment, and his own personal obstacles. Again, his honesty is most refreshing, demonstrated by the following lines:

His willingness to come forward and reveal deep vulnerabilities about himself is at the same time self-therapy for the artist, and worthwhile listening for the audience, album traits that resonate throughout the EP. It is again illustrated on the following Belief-produced track, “Belief’s Blues,” where the producer opts for a much simpler guitar and drum combination that allow the hook to blast out, “Why â€“ they just won’t â€“ let me be?” as Murs thinks out loud on matters of personal space (his quick commentary in the beginning says it all: “I don’t play well with others so all I ask is that you leave me the fuck alone”). But the attitude in the song lasts shortly, as Ant makes an appearance and smoothes out the melody and quickens the pace for the rapper to appeal to his mom to help him out of jail for a pretty humourous reason revealed at the end.

Bones then chimes in with chic strings and harder drums accompanied every so often with a soft horn to keep it bluesy. The Underbosses, who are the featured rappers on this track, are the only guests allowed to take part on the album and provide a solid if unspectacular offering. However, this is quickly outshone on the following song, Murs’ magnum opus for the EP, “A Friend’s Blues.” Justin Martin allows the strings, the triumphant piano line, and understated bass roll to take you away into Murs’ tale of losing someone close to you and the trials of perseverance. It’s a personal song that leaves a lasting impression, especially when you listen closely to the lyrics that, again, have a passion and deep meaning that truly grabs the listener:

“It’s sad it takes a loss to appreciate the gifts
So celebrate the occasion, just breathing is amazin’
To see the sun rise and set at a days end
A chance to fix mistakes that we regret makin’
Find joy in the simple things, no time for complainin’
The sun will shine, it can’t always be rainin’
I know it hurts deep, but you must maintain it
I seen it in my homeboys Terry and Tom
They’ve lost so many, yet they keep so strong
To lose a parent or a sibling and have the will to keep living
Takes so much strength, so I admire y’all
And one day hope to find out, what inspires y’all
And I’m still mad, askin’ why it happens at all
Some say that God takes them, and they lean on mythology
But I refuse to believe that it’s divine lottery…”

The whole song, actually, is one long quotable, but I’ll leave the rest for you to hear it yourself, and feel the song in your own way. The same can be said about the last song, “The Deepest Blue,” a rap about death and the importance of making memories now for those that will have survived you. Here, Black Panther cranks up the guitar and synth accompaniments for a last Murs epiphany on the ultimate of finalities, and again hits you at once with complex insight mixed with plain-spoken words.

Unfortunately, the EP finishes up at six songs, leaving you wanting more blues tracks from a rapper who, despite his relatively static flow, keeps the listener rapt into these tales of heartbreak, loss and self-realization. And while he demonstrates in earnest his ability to handle a concept album (a less complicated one, but a concept album nonetheless), you end up hoping that the EP was pure Murs, not the less capable rapper in the Underbosses, handling the whole effort. Still, the fact is, for an EP, you cannot ask for anything better than this as 1) production-wise, it manages to retain a cohesive sound despite having different producers per track, bringing a separate personality to each song while remaining in the unified mood of the blues, and 2) Murs, albeit still developing, dropped some fresh, honest and heartfelt lyrics on those tracks. In fact, while listening to the album, you get the sense that you are being taken out to a grungy lounge filled with troubled folk and given a seat at a table with one glass of scotch while Murs jumps on stage and lets the blues pour out. Just be sure to leave him the FU%K alone!