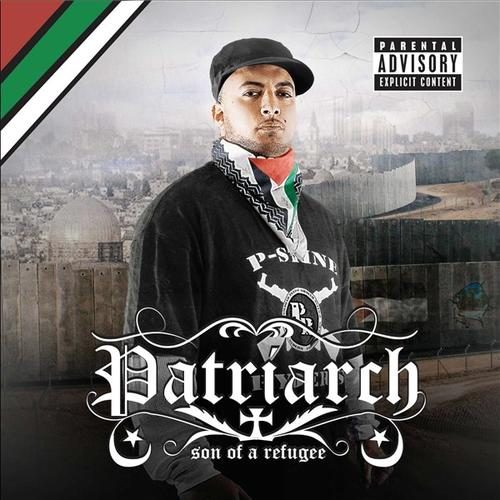 Patriarch :: Son of a Refugee

Palestine is a much disputed stretch of land in the Middle-East that is presently known as Israel. To my understanding, both the Muslim and Jewish faith have strong ties to the area and have been fighting over the land for years. Most of the animosity stems from the fact that the country which used to be called Palestine was taken over the British in the mid-20th century and eventually changed into what is now known as Israel. I’m not sure on all the details, but essentially the Muslim people who once inhabited Palestine were displaced and their land was handed over to Jewish people. Patriarch is the first rapper of Palestinian descent that I’ve come across hence why this history lesson was necessary. Patriarch touts his Palestinian heritage strongly and also boasts of a group/movement called the P-Stine Ryders. With such an approach Patriarch faces the difficult task of making music that stays true to his beliefs but yet is relevant enough for the average rap fan to relate to.

The first deficiency in the album is the fact that the Palestinian plight is largely overlooked. Patriarch mentions his heritage plenty of times, includes pictures from Palestine, and hints at the situation there occasionally, but you never get a full break down on what it’s all about. Maybe he assumes that most people know about Palestine, but the honest truth is that outside of hearing the name in the news most people probably don’t know the details. “Palestine” reflects Patriarch’s love for his homeland but doesn’t explain why and how his people were left without his land. Without the details of his cause it’s hard to get too into tracks like “P-Stine Ryders” since the question lingers, what exactly am I supporting if I say I’m a P-Stine Ryder? While Patriarch has nothing but good intentions, he seems to limit himself at other times. “Aywah” is a ladies anthem but is specifically aimed at Arabic women. Patriarch opens the track saying “my beautiful Arabic women, finally a song for y’all.” Representing your people is great, but the song leaves little room for other women to partake in the revelry since Patriarch makes it so focused on a specific group of women.

While Patriarch does struggle to focus his message and make it universal, “Son of a Refugee” consists of solid music for the most part. “Why Do They Hate Me?” has universal appeal and allows the listener to sympathize with Patriarch and makes a good analogy to the situation of minorities in America with that of the Palestinians in Israel. Patriarch also boasts solid guests as Kurupt, dead prez, San Quinn, and The Outlawz all contribute and produce solid politically themed tracks. Patriarch’s raps do focus on political statements for the most part, but his raps have a street edge that help him avoid sounding repetitive as exhibited on “Son of A Refugee:”

“There ain’t no time to play
I’m a motherfucking renegade
Believe me, I never run afraid
Everywhere I go they recognize my face
A madman from a different race
Why they mugging?
Like I ain’t got nothing
Know for sure, I’ma cop something
Nigga stop fronting
Yeah we block stunting
Roam as if our lives meant nothing
This motherfucking son of a refugee is busting
Don’t blame me for the way I be
The price of life, this is how you made me
No food no water, no brother no daughter, you can’t be mad at me
When I’m down to slaughter I got nothing to lose
Nothing to prove, but what I know will torture you
I know these lyrics is scorching you
You gonna have to kill me just to toss the truth”

“Don’t Let â€˜Em” is a fiery criticism of the government and call to arms, at least lyrically. “Crunk Revolution” sounds crunk musically but Patriarch infuses his lyrics with a message of knowledge and uprising. Patriarch’s style can be summed by the pounding “Gangsta& Politiks” as he provides the “politiks” while Kurupt is in top “gangsta” form and the hook brings the two together. Patriarch even shows us his softer side dedicating “Never Leave Me Alone” to his deceased grandmother.

Despite Patriarch’s lack of clarity on his P-Stine Ryder cause, “Son of a Refugee” turns out to be a solid album. The album moves between commercial viability and political relevance smoothly. Musically, the album maintains a consistent gritty vibe and all the beats are above average. Patriarch’s style is a little rough around the edges and he could refine his message to make it clearer, but overall Patriarch is one of the freshest things to come out of the Bay in a long time.