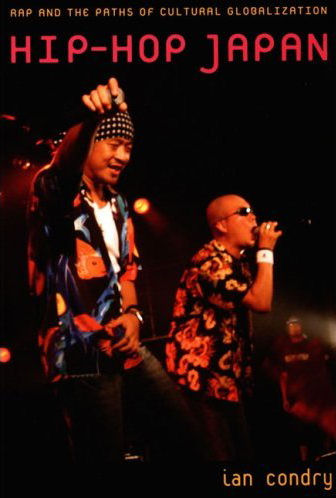 Hip-Hop has spread its wings all over the globe, but how Hip-Hop arrived at certain spots, what it’s meaning is in those places, as well as what it’s transformed into, differ greatly from area to area. Ian Condry did a painstaking amount of research on all of these topics in regards to Japan in his recent book Hip-Hop Japan.

Hip-Hop Japan covers a lot of bases and it covers them well, the lone issue with the book is that the language used in it doesn’t make for easy reading. You really have to concentrate as the author uses, in my opinion, far too many SAT words and not enough universal language, which is ironic since the entire idea of the book involves globalization. That being said, for anyone interested in how Hip-Hop arrived, spread, and is currently treated, in Japan this is a very informative read.

One of the most interesting debates in the book involves the concept of keeping it real. Since we’re in America we have our American version of it, but in Japan they have groups with two differing opinions on the subject, one feeling keeping it real means keeping it American Hip-Hop and staying true to its roots, while the other feels keeping it real refers to the idea of keeping it Japanese and true to one’s own essence.

Another interesting item in Hip-Hop Japan is that MCs are taking on the Japanese government which has adjusted history books in an attempt to create a more patriotic country. Artists are asking, sometimes outright demanding, to know their full history, even the awful parts, and it’s not unusual to have albums edited for content producers and labels feel will get them in trouble with the government. Some artists choose not to edit and those are the ones that both cause the most controversy and are viewed as the most socially conscious rappers.

There are the typical battles between commercial and underground, going pop and staying Hip-Hop, in Japan and there’s the added battle for female artists to try to get on. The role of the female is different in Japan than it is in the US, and Condry covers this in a chapter on women in Hip-Hop.

Overall Hip-Hop Japan is an incredibly informative book that could have been made perfect if it were put in more laymen’s terms. As it is I can recommend this book to anyone who is at the college level or older as a fantastic way to get a vision of what it’s like to have a country go from not knowing what Hip-Hop is to having a full fledged Hip-Hop scene.