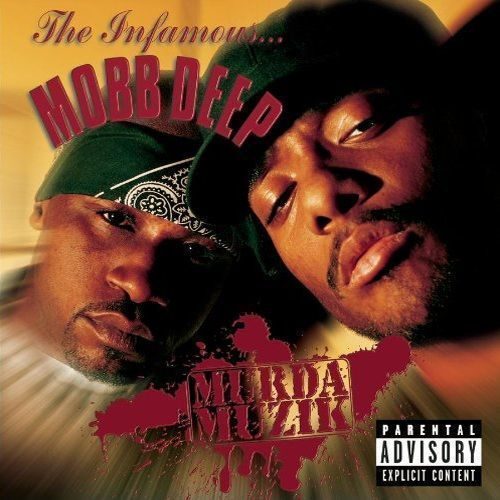 Even today, I remember the day I purchased “Murda Muzik” quite well. After a slew of label issues, which seems to be synonymous with Mobb Deep, the much anticipated album from Prodigy and Havoc finally made its way to the store shelves on August, 17th, 1999 on the always reliable Loud Records imprint. There was no doubt I was copping that joint after my profound respect for the previous two classics they dropped, “The Infamous” and “Hell on Earth”, respectively. However, when I looked over to my right I noticed the flossy cover of the recently released “Guerilla Warfare” CD by The Hot Boys and, being the impressionable youngster I was, I grabbed that too. In hindsight, this was a very important time in rap music as it represented the changing of times, as New York (and a few Cali) emcees started losing their stronghold on the industry and the music began to regionalize more for better or worse. Whatever the case, Mobb Deep remained true to their guns and released another bangin’ album with “Murda Muzik”.

You know right away as you pop in “Murda Muzik” that Mobb Deep hardly missed a step when the first song, “Streets Raised Me”, kicks off with the pitter patter of a low bass line and the soulful hums of Chinky. The song truly builds into a remarkable work between the pretty good introductory verse from Havoc, then the grizzly voiced Big Noyd delivers and finally the best effort from Prodigy with this thuggish verse:

“Vision the canvas I paint a picture
Similar to Ernies Barnes nigga
But mines is more ghetto more guns
More drugs, mostly thugs
All my duns, their baby moms daughter and sons
Dark blocks, with streets lamps shot the fuck out
Park benches broke, a nigga stretched out
Jumped off the roof to his death its real
Hand Ball walls displayed with R-I-P murials
Those who sling, play the shadows by the building
Devils spring, keep ’em going while the snows blowing
Grams get dipped, 50’s are moked, cookies are broke
And Spliced in large pieces for the fiends to smoke
The sun set looks beautiful over the projects
What a shame, its ain’t the same where we stand at
If you look close you can see the bricks chipped off
Sometimes niggas miss when they lick off don’t get clipped off” Street life

Any oddball rapper can rap about being ghetto, coming from harsh circumstances, but this Prodigy verse is truly an example that proves rap can be an artistic expression as opposed to the poison it is often referred to by conservatives.

Speaking of ‘poison’, Mobb Deep follows “Streets Raised Me” with another quality song entitled “What’s Ya Poison?”, which sparkles with a creeping shuffle noise and a crescendo piano sample that belongs at an open-casket viewing. A young Cormega really steals the show with his bars at the conclusion of the track. This is the first track that really had people wondering who this dude with the slight speech impediment was and eventually he gained the shine he deserves. It is disappointing to think that we will not likely see another collaboration between these Queensbridge greats because of another ridiculous beef. Nonetheless, this track verified that the listener was in for another treat.

“Allustrious” was the first song from this album that got any notice prior to the albums’ release (on The Corruptor soundtrack of all things) and it is another nice one, but it never really caught on the way the group was hoping. The sound of the song is so vintage, there is a crackling noise that makes you feel like you are listening to vinyl. It is a subtle touch, but another instance on how Mobb Deep takes played out song topics and make them original in some way.

The big single that finally brought this release the notoriety it achingly lingered for was “Quiet Storm”. The video for this song is amongst one of the best in rap history, which resulted in an increase in sales. It is so gully the way Prodigy and Havoc gun battle it out with the SWAT team. And when they jump off the wall “Matrix”-style, it makes for a pretty unforgettable moment as far as rap videos throughout history go. The bass line palpitates harder than Dick Cheney’s heart. In one word the song is a “classic” in every sense of the word. Also, it was a rare occasion that a remix got more shine than the original, though both are very similar and for the most part interchangeable. Lil Kim is a welcome addition on the remix to compliment the Mobb and she arguably helps balance the song.

Almost all of the guest spots on the album feel as if they are necessary because the overall quality of them. The following all show up for the show; Big Noyd, Chinky, Cormega, Eightball, Lil Kim, Nas, Kool G Rap and the Infamous Mobb. Raekwon’s verse is less notable because of the mediocre beat that he flows on. Lil Cease, on the other hand, is the only genuinely expendable attempt. The Alchemist became a relevant producer with some of his production assistance on this album, though, Havoc should always remain the executive producer of any Mobb album in order to stay true to themselves.

Mobb Deep, as always, are at their best when they in their own words, get dunny. The organic, menacing, tracks age like wine through the test of time when comparing them to the bouncier, filler material like, “Can’t Fuck Wit”, “I’m Going Out” and “U.S.A. (Alright Then)”. Luckily, the missteps of Mobb Deep were hidden between the hotness of the rest of the material as the listener becomes enthralled with the top notch material and build a symbiotic relationship the more you listen to it.

Sadly, since this near classic release in ’99 Mobb Deep has lost their edge. In fact, the best album they have released subsequently was an officially pressed mixtape entitled “Free Agents” that barely exceeded a level of mediocrity. “Infamy” is as the title suggests, an album that will go down in infamy for its overabundance of filler material. Then, the Mobb proved their value by getting picked up by one of raps top labels, G-Unit/Interscope, to release a slightly improved LP, but still no where near the level of “Murda Muzik” and its predecessors. The mass appeal approach of the label just doesn’t match Mobb Deep’s grimy style. That’s not the only problem though, as Prodigy has since sounded like he is a Nyquil addict for the past half decade and his slowed down boring flow is putting heads to sleep. Still, there is that slight ray of hope that Havoc and Prodigy will regain the level of mastery on gangster rap music they once had. Prodigy is dropping two solos in 2007 to make those dreamers salivate about times of old.

When I copped that “Murda Muzik” on August 17th, 1999, I did not realize the relevance of my secondary purchase of “Guerilla Warfare” by The Hot Boys would have on leading charge of the Southern invasion (commercialization of southern rap), and subsequently other regions, on the rap music scene. Only a few years earlier, everyone involved in the industry was screaming East coast or West coast and at this time in history the Hot Boys made people think differently. However, if “Murda Muzik” by Mobb Deep marked the end of the finest era in rap music dominated by New York emcees, then it was damn near a grand finale’.