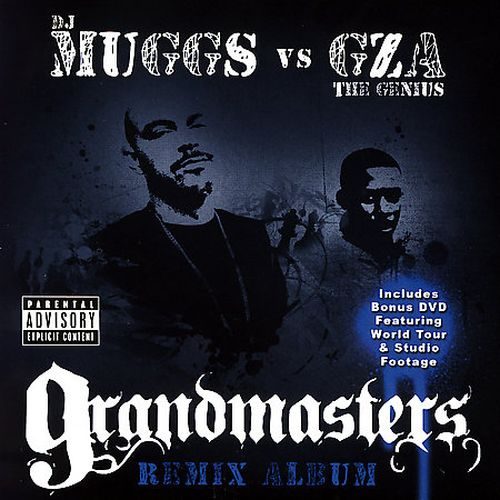 Well the first thing that needs to be said about this album is that DJ Muggs needs to step up his internet game BIG TIME. Log on to www.AngelesRecords.com to try to get some background info on this release and you get no info whatsoever since the site hasn’t been updated in a year. Head over to the MySpace page listed on the website and you get a promotional flyer but no info on the album. Worst of all, the Angeles Records MySpace page is flooded with ads for internet scams claiming to give you a free Gucci bag or gift card for signing up, some seemingly put up by Muggs himself, not a good look. From what I can gather this is a re-release of the previous “Grandmasters” album with two important differences. First, while GZA’s verses are all the same, new producers were enlisted to remix every track on the album. Not sure how the producers were chosen, but it’s a fresh concept. Add to this twist a bonus DVD that includes footage of GZA and Muggs on tour and for once in the history of rap a re-release of any album is actually worth your time and money. I’m not talking about re-releasing out of print albums, but those albums that get released a few months after the album first hit shelves. You know the ones, where they promote a new single not on the original and re-release the album with one new song. Worse yet are those albums that wait months before releasing the “limited edition” and force you to re-purchase an album if you want the bonus DVD (Alchemist I’m looking at you). Suffice to say, I hate when labels pull that crap and I show that by refusing to buy any re-release that pulls that trick. I made the exception for “Grandmasters Remix” precisely because this is much more than the common re-release.

If you’re familiar with the original “Grandmasters” or a certain rapper named The GZA, then there’s no need to even talk about his contribution to the album. If not, hit up Flash’s take on the original “Grandmasters” so you can see just how dope a rapper GZA is and always has been. The difference here are the producers and despite being all unfamiliar to this reviewer all come through with dope performances. Dialekt contributes a simple loop and grainy drums to “Those That’s Bout It” for a performance that would make 9th Wonder jealous. DJ Khalil gives “Destruction of a Guard” a hardcore Cali street vibe with pounding drums, a deep funk bass line, and unrelenting synths. James Alsanders goes with a laid back classic Wu vibe on “Exploitation of Mistakes” with an Asian inspired sample that sounds straight out of an old kung fu flick. “General Principles” finds LD mixing subtle samples with a simple piano melody for successful results. On first impression all you hear is the drums and piano, but upon closer inspection everything from electric guitars and voice samples populate the background. The dopeness doesn’t stop as King Karnov flips a crazy sample on “Advance Pawns” consisting of majestic horns and stirring strings. Given that the song is named after the initial stages of chess match which many equate to war, the music is more than appropriate.

DJ Solo drops by for “Queen’s Gambit” and “All In Together Now” and is only one of two producers to have multiple tracks on the album. While DJ Solo’s tracks in themselves are pretty good, they don’t quite fit the vibe of the originals. Solo is to be commended as he achieves the same gritty and soulful sound of the other production on the album with what sounds like much less dependency on sampling, but overall his production doesn’t fit the songs as well. “Unstoppable Threats” comes next and Lewis One’s soft piano stabs and high pitched strings give the track plenty of energy, but aren’t overbearing. On “Unprotected Pieces” St. Louis delivers what is probably the album’s only adventurous and experimental joint as he goes hard rock with the beat, mixing various guitars to provide the sonic backdrop. LD shows up once again on “Illusory Protection” and provides the album’s only other moment of a mismatch as his beat’s soft drums and lingering synths would be perfect for a love song or reminiscing joint, but sounds out of place paired with GZA’s lyrics. “Smothered Mate” ends things and consists of Scoop Deville’s interpretation of “The Symphony” with a few G-Funk synth lines thrown in here and there. Hearing GZA flow over the symphony beat is obviously dope, but the track loses points for lack of originality.

“Grandmasters Remix” isn’t a better album than the original version, but at the same time it’s tough to say it’s any worse either. No slight to Muggs’ beats as in my opinion his were superior to what we find here. But even with a few mismatched beats, the producer’s come through with a strong effort. Throw in a bonus DVD and the purchase is almost a no-brainer for those who are fans of GZA. To be found on the DVD are a mix of backstage access, tour concert footage, and making of for a video off the original album. Must see moments include seeing GZA stopping a concert to chew out fans for throwing liquid on him. He says “I don’t throw shit on you so don’t throw shit on me,” which coming from a lesser rapper would sound like a prima donna speaking but GZA genuinely doesn’t want some mystery liquid all over his face. But be warned, GZA and Muggs make a point of bringing to your attention the fact that the bonus DVD was filmed with a digital camcorder and the quality isn’t that of a professional recording. Even so, it’s definitely worth peeping for the fan and if I could give out DVD Vibes with this review it’d probably bring it up to par with the original release.