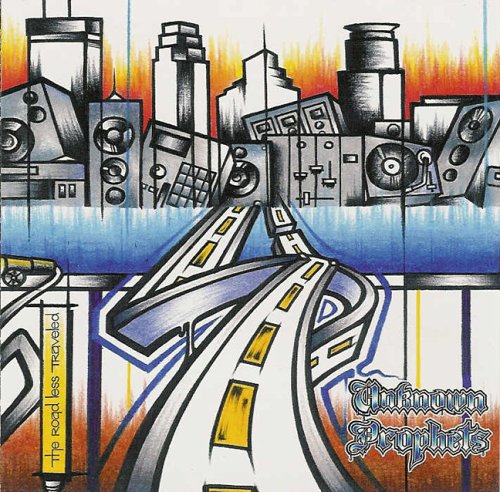 Being an underground (though commercially viable) hip-hop artist seems to require two separate, though often complementary, functions: differentiation from other underground artists through put-downs and braggadocio; and vehement dislike for the mainstream’s supposed over-emphases on guns, cars, and women.

The Unknown Prophets’ first full-length album, “World Premier,” mainly fit the requirements of the former function, while their newest album, “The Road Less Traveled,” tends toward the latter. Gone are the verses like “Y’all want another MC’s respect / you gotta burn ’em” and the dreams to “reach more than just a couple of states” (“World Premier” from the same-titled album) in favor of a consistent belief that “nowadays every song’s about bein’ a thug / totin’ gats, killin’ cats, and how it’s cool to do drugs” (“Mr. Mainstream” from “The Road Less Traveled”).

This is not to say the Prophets don’t do an excellent job at distancing themselves from the mainstream. On the contrary, they’ve been rather successful. The 3-man, all-white group from Northeast Minneapolis, consisting of MCs Mad Son and Big Jess and DJ Willie Lose, are regularly on the “Best of the Twin Cities” ballot under “Best Hip Hop Album” and “Best Hip Hop Group.” In fact, both Mad Son and Big Jess each have their own full-lengths, and Big Jess produced the majority of “World Premier.” Though they’re often beaten by fellow acts like Atmosphere and Brother Ali, the Prophets are a notable up-and-coming group in Midwest hip-hop whose status got a big help from appearances by these Rhymesayers acts on the first album.

So how’s the newest one? “The Road Less Traveled”‘s opener, “Time to Move Forward,” sets the positive, festive tone with a grand opening that perfectly settles down to let the Prophets explain who they are and what they plan to do:

“And if you ask me what’s the one thing that be burning me deep
It’s the uncertain cats get the props but they deserve em the least
The wait’s over, no more holdin’ your breath
We bringin’ hope to those stuck out in the cold and depressed”

Okay, so the group believes they’re on some sort of mission. This is average fare, often reflected in modern themes, a la recent albums by Jay-Z and Nas. “Our Time Now” goes further and finds the Prophets outlining their past accomplishments, explaining past failures, and proclaiming the need to “question the message rap is sendin'” and that it’s their time to “get on the field and do [their] duty.”

“Not Today” has an orchestration vaguely similar to a simplified Stoupe the Enemy of Mankind beat, while “Let it Loose” continues with the Prophets’ in-your-face style and tries to get the listener to celebrate the dismantling of the mainstream.

“Dive In,” a hilarious look at previous women troubles, shows how such situations develop:

“Some women be trippin’, fine dimes and crazy minds
Ya break up, she won’t leave you with a past behind
Relationship’s fallin’ apart, you’re talking about walkin’
You breakup and the next thing you know, Miss Crazy Stalker
Letters in the mail, blowin’ up your cell
Talkin’ shit to your next female till she’s fed up and decides to bail
[…]
I don’t know what it is about women that makes guys lose it
Eyes glued to their thighs and how their behind’s movin
A fine hottie with a bomb-ass body will prove it
And now you’re actin all stupid dude, why’d you do it?
All that max-status you had is gone instantly
Every bit of player that was in you is now history”

“Lord Please” is a single-violin, simplified orchestration that shows the two MCs asking a benevolent deity for continuing help in their “mission,” with specific life experiences provided as to why this help is deserved, over a stutter beat nicely woven into every eight bars. It functions as the album’s single, the video for which combines shots of, ironically, a church and an upcoming stage performance that gets closer and closer as the video continues. This particular song is a little preachy and uplifting, though these characteristics don’t necessarily hold true for the whole album. If you’re above appreciating the occasional appearance of these themes, this record is probably not for you.

I found the sultriest sound in “Move Mountains,” with Stokely Williams of Mint Condition providing a sexy vocal background that perfectly interacts with a faded accordion’s inhalations and exhalations. Content-wise, the Prophets are again harping on the fact that “every song makes it cool to do drugs” and finding new ways to formulate their distaste for the mainstream. As a welcome change, Mad Son finds a way to contrast the supposed unrealistic and out-of-touch commercial music with the experience of the average listener, who is apparently rarely reflected in the mainstream arena. At nearly five minutes, the song is a definite standout, showing the MC wants to use his gift in “productive, positive ways, to help those lost find a way up out of this maze.”

Mad Son’s musical artistry continues in “Lost in Time,” where his own guitar work finds a home in DJ Willie Lose’s head-nodding beat and Big Jess’ stories of different people finding solace in musical expression. In complete contrast stands “This Song,” a loud rap-rock piece that seems to indulge the pre-teen desires of the Prophets when they listened to Fred Durst and Everlast. I thought it might also be possible that Willie Lose accidentally switched his piano and drum loops for adolescent rap-rock beats. This piece seems more at home as the token metal-rap song included on every Necro or Ill Bill record. If anything, leave the rap-rock to Cypress Hill and other artists that attempt to pull it off with some ounce of seriousness.

“Against the Grain” rounds out “The Road Less Traveled” and acts as a restatement of themes articulated earlier and throughout the record. Think of it as a sort of conclusion to a 7th grader’s 5-paragraph essay. Present here are the predictable re-emphases on the ills of the mainstream (which has become a sort of folk demon by now) that have been hammered into the listener’s head over the last 60 minutes. To be honest, I found myself wishing I had spent the time watching CBS’ 60 Minutes to critically examine these so-called ills instead of having them drilled into me like a high-school-theme-song recitation.

“The Road Less Traveled” is not as bad as my previous, more caustic remarks insinuate. The Prophets possess an excellent lyricism, verse structure, and flow that make a first listen enjoyable. I also appreciated the low guest appearances (totaling something like 3 unknown spots?), which allows the listener to get a good idea of who the artists are. Neither MC dominates, instead giving the other time to breathe and reflect on the subject matter at hand.

Beat-wise, DJ Willie Lose provides some lush, catchy material, whose pseudo-mainstream character seems to contradict the anti-mainstream content unfolding over the top of it. Think of him as a simplified, non-technical version of Stoupe from Jedi Mind meets Ant’s beat from “Godlovesugly” (off the album of the same name). A note: if you like the latter group’s beats, you’ll probably enjoy the sound on “The Road Less Traveled.”

Yet as one spins this album more, the replay value declines in the face of increasingly visible, repetitive, almost hypocritical content. At times, the Prophets remind me of a friend’s comment on Jurassic 5, namely that the artists talk about how much they kick ass, but never really prove that claim. It seems the Prophets haven’t realized their previously desired success, and therefore opted for the traditional hip-hop cop out of hating on the mainstream. This lack of success becomes justified, a self-righteous badge of honor embodied in the “road less traveled;” and implies that the overbearing, marginalizing effect of the mainstream is responsible for their non-superstar status. I listen to enough obscure, leftfield rap to already agree with them, but I want lyrics that reinforce that belief through off-the-wall or emotional examples, not overdone preaching.

Listening, I wondered why, with spots from Slug, Brother Ali, and Eyedea on their last 3 albums, haven’t they seen that success? Keeping in mind the huge following of these artists, I find it hard to believe the mainstream can greatly impinge on the Prophets’ ability to follow the same road. Understanding why they’ve been kept from the main and secondary streets, I believe their travels down the road less traveled occur as a result of their own sub-par, albeit hopeful performance.