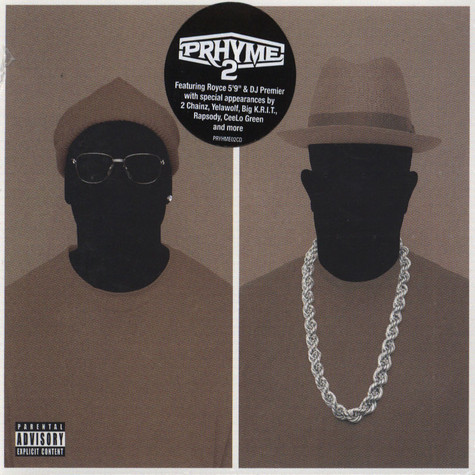 There come’s a time in one’s life where you start to realize certain individuals aren’t completely human. The record breakers, genetic freaks and folks with more talent in their little finger than any of us mere mortals could ever muster in a millennium. The type of people who are so talented that they start to piss you off. As far as hip hop goes, nobody embodies that more than PRhyme.

If you’re reading this and need background information on either Royce Da 5’9’’ or DJ Premier, well, God help you. They embody their craft – Royce has a strong argument for being one of the best emcees while Preem is the greatest hip hop producer that’s still making music. The Gang Starr producer could have retired in 1999 and gone down in history as one of the best yet, but his catalog has just grown and grown over the last two decades to include countless classic 12” singles and a steady stream of excellent LPs. But let’s not dwell on their past achievements because PRhyme is very much about two veterans challenging themselves in the present.

“PRhyme2” is most certainly a contiunation, yet feels even more experimental than the original’s sample source, provided by Adrian Younge. “PRhyme 2” sees Premier locked down to Antman Wonder and it lends a harsher sound yet one that still gives the record a PRhyme feel (as opposed to a Premo feel). Lead single “Era” sees Royce throwing jabs at the new era of emcees and while Dave East provides a perfectly fine verse, it highlights the different level the Detroit fire-spitter is operating at. Production is noticeably stripped back, also evident on “Rock It” which throws a nod to A Tribe Called Quest. The history and constant references to moments from yesteryear are great for seasoned rap fans but may go over some listeners’ heads. From the outset, “Black History” pays homage to Gang Starr and sees Royce deliver a ridiculous bit of wordplay using the D.I.T.C. artists’ names:

“Y’all know I’m from Detroit,
I’m diggin’ in the crates, now I’m from the diamond-D
I ain’t wit the showbiz, I’m just AG tryna sign me a Fat Joe deal
And go and ball and every bitch I got OT is on call
(What’s that?)
That’s O.C, bitch, I confess that I finesse
I smile at death like Malcolm X”

Premier could have scratched every hook but it’s surprising just how many songs have Royce showcasing his vocal range. He’s not exactly Adele, but it’s an underappreciated side to his skillset that works well, particularly on “Sunflower Seeds”. Yelawolf underwhelms on the grimy “With Out Warning” which relies on Premier’s scratching to keep the listener’s interest (the Xzibit snippet is nasty). Fortunately, most guests fare well, including the eponymous Roc Marciano. “Respect My Gun” is one of “PRhyme 2”’s best moments, and highlights why I’d love to hear Roc over kicks and snares more often. Stealing the show however, is Rapsody’s performance on “Loved Ones”. The amount of times Royce has rapped about cheating on his wife and gotten away with it, only to have Rapsody put him firmly in his place is not just refreshing but confirmation that she can outdo one of the best lyricists in the game:

“You respect them niggas way more than me by a mile
I had your child, shit, babe, I can’t figure it out
You cheat on me, it’s respected, cheat on them, it’s foul
Somehow, the codes that you live by ain’t balancing out
Cross the line, motherfucker, I’ma line it with vowels
I owe you nothing, fuck your vows
I was your down-ass chick, you let me down
Said your word and your balls is alls you had
I learnt your your word and your balls wasn’t always ’round”

2Chainz, not particularly known for song-stealing bars, tears up “Flirt”. The tongue-in-cheek single pokes fun at women that lack subtlety when flirting, but can come across as a weak excuse for Royce’s lack of self-control. “Everyday Struggle” is Royce venting about the snitching that goes on with DJ Vlad’s YouTube channel and how the industry has taken to exploiting the criminal pasts of young artists. It already feels a little dated given Joe Budden left Everyday Struggle (the Complex hip hop show) and the show lost a lot of its relevance. Nonetheless, tracks like “My Calling” are guaranteed to appease hardcore fans and “PRhyme 2” on the whole, successfully lives up to its predecessor, benefitting further from having less guests.  Trim the last three tracks and I’m sure more people would remember this as one of the best records of 2018.