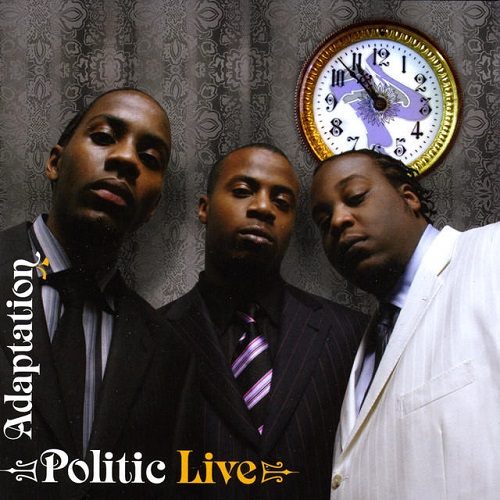 Although Canada has plenty of talent flourishing throughout, even the most diverse, cultural, and urban areas have had a difficult time circulating artists in the rap and hip-hop scene. With abundant fans focused in city centres like the T-Dot (Toronto) and Van City (Vancouver), the reality is that Canada lacks in the young, urban population needed to invariably advocate high-volume sales for its native rhymers as sales outside the country are minimal. Now, you can only imagine why Canada’s first urban music station just recently developed in 2001.

Defying the adversity of Canada’s fading hip hop arena, Politic Live hailing from Edmonton or “E”Lympia as known by native Edmontonians, consists of brothers Bigga Nolte and Dirt Grit with cousin Young Mav. With the exposure to music while growing up in a household full of creativity and inventiveness with a DJ for a father, Bigga Nolte and Dirt Grit grew both in knowledge and awareness for hip hop. Eventually following in their father’s footsteps, Politic Live formed out of both passion and dedication as they come back for more after their debut album “Notoriety” was released in 2003. Their second endeavor “Adaptation” features a list of guest artists, a multiplicity of sound, and stellar lyricism to keep any hip-hop fan interested.

With a deep rooted influence in West Indian culture because of parents from Jamaica, the members of Politic Live retain the importance and significance of their background, being first generation Canadians, as heard throughout their music. Sounds influenced by Caribbean and reggae expression are found throughout “Adaptation” as drums, melodica, and horns are incorporated from start to finish. In “Block O,” the track refers to the block parties of the ’80s that were closely similar to sound systems in Jamaica. These large parties, originally outdoors were thrown by owners of loud and expensive stereo equipment, which they could share with the community or use to compete among themselves. With a slow steady beat and guest Janaya Ellis on vocals, “Executive Summary” features low bass, drums, strings, and horns as reggae meets funk and instills the message to remain positive even through misfortune.

Combining reggae and hip-hop with trumpets blaring on cue, “Purification” features Singin’D on this exceptional track. The sudden break in the beat appearing in the middle of the track features a faster dancehall experience and puts the hip hop tonality aside as it fits the matter in hand with an appreciation to Jamaica. With a guest appearance from JJ Heaven, his melodic Jamaican accented verses add to the overall essence in “Tai Chi RMX” and exposes the effects of the daily grind. The track reinforces the fact that “everyday I’ve been working for the finest things I am searching.”

Politic Live stresses time and time again to generate and invent hip-hop that makes people not only socially aware, but proactive at the same time. Touching upon a line-up of topics and subjects, Politic Live maintains their individualism by keeping their audience engrossed with their unmatched lyricism. Influenced by the women featured in their video for “The Matinee,” Politic Live turns the tables around in “Video Light” to expose the experiences and struggles of, for lack of better words, “video hoes.” It features Risse as a woman who contemplates her decisions to audition for yet another video and ultimately decides to seek better, more reputable career choices as she wants to be “queen.”

Reflection of the past in “Spider Hill” shows the influences and esteem held for those who have molded Politic Live into who they are today. Looking back at the battles of being impoverished amidst a family with hungry mouths to feed, Politic Live shows their strength through hardship as:

“No one said growing up would be easy
Just had enough food to feed me believe me
Shared a bunk with my brother beneath me
You may not believe me
It’s not like T.V.
I wasn’t living in no Cosby Show
Had twelve mouths to feed and only one stove
Jamaicans on the long quest for more
I’m a living testament that this world is yours
Had to move on
Had to grow up
Had to get it on my own
Show em what’s up
Trying to drive big trucks
Escapades and Escalades
I grab the mic and rush the stage”

“In the End” sums up what “Adaptation” is all about. Politic Live exhibits the ferocity and vigor for what they have worked so hard for and for what every independent artist feels, for that matter. They ask themselves, “Why do we do all these things that we do as independent artists, what are we striving for in the end?”

Whether Politic Live faces adversity and struggle in both the past and present, they have still managed to maintain sanity and strength through their music. “Adaptation” shows exactly that; the willingness to adjust to different situations and conditions only brings positivity. Politic Live’s delivery and clarity with their lyricism stays on point throughout the album, while their many guest appearances adds to the comprehensibility of it all. With a wide array of tracks that the audience can appreciate and a variety of beats influenced by reggae, dancehall, and hip-hop, Politic Live’s “Adaptation” dissproves the Canadian hip hop stigma of artists releasing inferior music. All I have to say is that U.S. emcees have some competition headed their way.