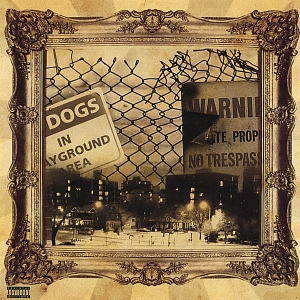 The Virginia duo consisting of emcee MicSource who possesses a voice surprisingly similar to that of Outkast’s AndrÃ© 3000 and producer/emcee Dox-One, come together as Grown Folks in their debut album “Child’s Play.” Receiving praise for their mixtape “It Is What It Is,” Grown Folks has literally grown into a hip hop legacy with a sense of development and wisdom. Socially conscious and representing the independent label, Grown Folks encompasses a hip hop sound for the experienced, familiarized individual.

The title track that shares its name with the album it’s from, “Child’s Play” features a nostalgic beat with the back and forth repetitions of a solid bass line and a break comprised of a heavy bass, guitars, and keys. While undermining and mocking other emcees that are trying to come up in the industry, Grown Folks shows that the competition is at a minimum, despite the struggling efforts of other artists as MicSource says:

“Believe me son you been through the high and the low
Seen the things you killing and dying to know
And spit the words you feeling and trying to show
Relax young buck the spirit is trying to grow
But you don’t want to learn
It’s them imaginary stripes that you want to earn
That’s alright
Do it your way
I’m a do it my way
The fly way
This MicSource, Grown Folks
This is child’s play”

“No More” featuring Phil the Agony, is yet another track to belittle the “other” emcees and although not necessarily a battle rap, it does its damage by ridiculing unskilled artists as the hook professes, “We don’t want to hear that weak shit no more.” Praising the independent label from which they are from and frowning on the mainstream blueprint, Grown Folks’ reiterates with clever, yet witty lyricism as MicSource says:

“I’m here to get it off of my chest and let it off
Your game is shitty
You either got to know Jay Z, JD, Dr. Dre, or Diddy
And I don’t know none of them
Aint never met one of them
And I aint trying to run up under them
So if you aint throwing that money on the table
I fuck it with the independent label for real”

Grown Folks keeps it live and upbeat with club banging tracks such as “Official” incorporating the famous Melle Mel’s lyrics of “it’s like a jungle sometimes, it makes me wonderâ€¦” while praising the progression of their own music and talents. Also, the heavily synthesized beat in “Keep Your Hands Up High” is definitely a track to be danced to and better yet, head bobbed to.

While showing a lighter side to their personalities, Grown Folks shifts towards the other side of the spectrum to suggest a realistic perspective on issues and real-life situations facing the masses, yet remaining positive nonetheless. With its soul infused beats and vocals, “Sunday” features a melodious voice accompanied by poignant lyrics throughout the track and takes us on a journey of survival both financially, emotionally, and physically from week to week. A self-explanatory track with vocals singing “I love you, I need you,” “Love Music” expresses the emotion and heartache for our loved ones. MicSource recognizes the love for his mother, wife, and child as he says, “No one can measure your worth.” A remembrance to those who have passed, Grown Folks shares their respect with their audience in “Goodbye” which features harmonious vocals together with the lyricism of MicSource on a slow, mellow beat. Ultimately, the idea is instilled that “some say that life goes on, but that don’t mean the pain goes away.” Lastly in “Family Man,” Grown Folks directs their attention to the “groupie/home wrecker” types of women and shows the importance of remaining loyal to one’s family. In an appealing way, the track incorporates a singing conversation between the “home wrecker” who admits her needs and the “family man” who denies her desires because of his faithfulness.

The self expression from Dox-One and MicSource through “Child’s Play” is a clear-cut creation of an album that spans a variety of subject matter with enough soul and funk saturated tracks to keep you interested. The positive nature of the group remains constant throughout, just enough to instill the beliefs in moderate change and especially social improvement. Although the album maintains its impeccable, amusing lyricism and increased levels of seriousness, I would have enjoyed a few more lighthearted, lively tracks, but then again, it’s not “child’s play” for that matter, if you know what I’m saying. There’s that level of hip hop maturity that has to be maintained and Grown Folks does it well in all aspects as their mission states: “to bring the world great music with a twist, someone has to fill the void left by radio/record labels that say hip hop consumers are only kids. We do this for the 25-40 year old hip hop lovers.”