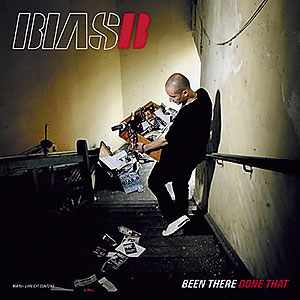 Bias B: Been There Done That

Bias B once again reminds us that Hip-Hop is a global phenomena with the Australian natives’ release of “Been There Done That”. Bias is apparently a marquee name in the Australian music market as this very release has hit #14 on their urban charts and 4th on the Independent albums listing. Nothing more exemplifies the notion of a worldwide Hip-Hop than the way Bias delivers his rhymes and his accent that will have a lot of close-minded listeners hitting the eject button preemptively.

Imagine for a second that Vinnie Jones from the movie “Snatch” was an emcee–there you have it, the substance that is the make-up of Bias B. Bias’ writing structure is tightly constricted by the limitations of time and space. Bias fits about as much lyricism as possible to squeeze into bars to the point that it sometimes feels tense when the music, or subject matter, does not lead listeners to believe they should get this feeling. “Been There Done That” is the third solo from Bias B and by this point he should feel more relaxed on the mic. Meanwhile, there are moments of fluidity that make you think that there is untapped potential like on “Goin’ Down” when he spits “Catch me rollin through the hood, Hurstbridge, Heidelberg, COLLINGWOOD!” it is silky smooth.

The title cut that opens the album is an intense song–Bias tries to rip it the best he can, with the fastest tempo the album sets, but the effort falls flat. Lyrically, “Been There Done That” is a piece of music that most anyone can relate to, but too often his accent is distracting, especially because he does rap faster than average. That being said, the lyrics of the opening track start off with the following words over a groovy dance style track and a chant-like chorus:

“It all began back when I was wagging school
Hanging out around the city thinking that was cool
Being a little brat had to break the rules
Started hating school then I became a tool
Look at the teacher thinking why’s he so smart
If so he’d have a better job and not be teaching class
I was more concerned about being a lark
And hang around kids who sold weed in the park
I had street in my heart before I’d seen a yard
Piece of chalk on the pavement leaving a mark
Report cards said I had potential
I was hanging out with kids who were truly mental
The forecast bad and influential
Lucky my raps found the pad and pencil
Released 12’s, albums, instrumentals
And now I’m getting sentimental”

This is just one example of Bias’ jam-packed verses. There is simply an overabundance of content thrown into each verse. The chorus is extremely long-winded as well, which gets tiresome over the course of multiple listens. More importantly, it is doubtful that any listener would be convinced that Bias had “street” in his heart before he had seen a “yard” when considering the context of the rest of the verse (he calls himself a tool) and diction not consistent with United States thug rappers. This digression is not to condone unnecessary violence in rap music, we all know there is plenty, but why promote it as an artist if you do not prove to represent it. Thankfully, Bias B does not get super gully on a regular occasion (save for “Wordem up”), yet sometimes the material is mediocre for other reasons.

“Hit It Some More” has a servable bounce beat with a kind of West Coast vibe to it. The lyrics hit a level that induces laughter with their overly dramatic effect, when Bias explains what he wants to hit it some more in regards to drugs, alcohol, violence and women. The song is surprisingly not the complete romp into a misogynistic world that is expected. Despite the multiple ways that Bias flips the phrase when he repeatedly states, “I want to hit it some more” with his nasal voice the song cements a place in the lower ranks of rap music released recently.

Bias has enough rap sensibilities to vary his music though and songs like “Same Old Song” really shine through with a Primo-esque beat, which uses vocal samples and cuts. The irony is that this track is supposed to be just the ‘same old song’. The lower tempo and less synthetic beats serve Bias B far better than the more commercial sounding joints. “Bundle of Bees” is a quality exercise of alphabet soup over a similar backdrop that adds a piano loop. Also, “Now You’re Gone” is Bias’ version of “Dear Mama”–the good old ode to his mother and though it comes off as slightly corny, there are not many rappers who are willing to show their sentimental side. The song features vocals from Miss Brown who delivers a fitting chorus.

Bias B brings some of his homeboys to this release. Bigfoot, another artist presumably from Australia, is featured on 3 tracks. Bigfoot sounds similar to Bias B, but slightly more aggressive as if he is yelling at the audience at some points, but his flow is a little bit sharper than Bias’. The features are a welcome addition in general, because they also add depth to the album as a whole.

“Been There Done That” lives and dies by its name. The idea of listening to an Australian artist may be new or novel to some, as it brings the rest of the world into focus for us ethnocentric Americans. However, if you have heard artists like Dizzee Rascal or The Streets the impression Bias leaves will be underwhelming by comparison. Too much of “Been There Done That” gets lost in translation and will not open the ears of close-minded listeners.

Bias B: Been There Done That
6Overall Score
Music6
Lyrics6.5