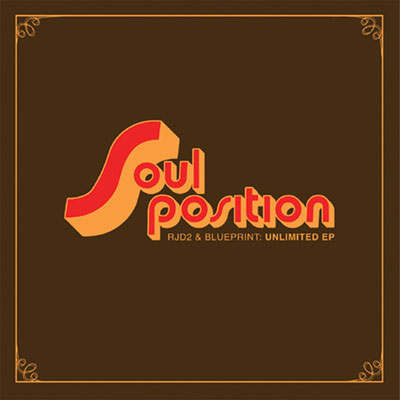 RJD2 has been making treats for the underground since bursting on the scene with Megahertz (MHz) in 1998, and in 2002 dropped his own DJ album “Dead Ringer” on Definitive Jux. Blueprint released his own solo album “The Weightroom” in 2003, but he’s also known as a producer on his Unforeseen Shadows” and “Got Lyrics?” by Illogic prove he’s equally versatile on either side of the recording booth.

Seperately, their reputations are solid gold. It’s really no surprise then that the two Ohio indie all-stars would link up to make hits. Adopting the name Soul Position, the duo quietly released the “Unlimited EP” in 2002, with the promise of an “8 Million Stories” album to follow. Unfortunately the latter has never materialized, and there’s really no good reason why. With only six tracks on this short twenty-one minute album, the end result is to only leave the listener cravign more. Take “Mic Control” for example. RJD2’s beat is equal parts brutal and beautiful, stitching together pianoes and shifty drums so well that DJ Premier would be jealous. While this would leave some inferior MC’s speechless, Blueprint rises to the occasion with pure verbal artillery:

“Beef turn ‘Print into a different man
So I might slap you into a brand new dental plan
Or have you makin co-payments on some eyewear
You got me wrong, I only act like I care
I used to be a substitute teacher’s worst nightmare
A booksmart smart-ass with too much time to spare
Skippin study hall so I can play ball
Cheatin with the answers to the test on my palm
Ain’t nuttin changed, it’s still on
Except nowadays I get paid to put it in a song!
It’s only right…
I don’t play with life, so I don’t play with mics”

“Night to Remember” takes the duo in a whole different direction. RJD2’s smooth track may give hip-hop heads fond recollections of the Solesides heyday, and Blueprint shows love to the nightlife scene like a true Midnight Marauder:

“But one night it was kind of different
I spotted this hot chick, at the end of the bar lookin THICK
Black girl, shinin like a black pearl
I’m thinkin – she checkin me out – but I really can’t tell
And right before I get up the nerve to speak
She walks up and asks me to join HER for drinks
I told her that I don’t really drink a lot
She laughed, and ordered up four rounds of shots
One shot, two shot, three shot, four
One more shot and I’ll be earlin on the floor
I knew I would be hurtin the next day
But I will get bent if it gets me laid
Twenty minutes later she’s on some shit
Sayin she’s an exhibitionist with a set of fierce tits
I told her that’s what I like to hear
But if it’s really true she should pull ’em out right there”

Want to hear the rest? Go cop the EP already then. Being an affordably priced release as it is, it’s even more of a bargain when you hear the relaxing jazzy soul of “Take Your Time”, the audio collage of “Oxford You Really Owe Me” or the title track “Unlimited” which aptly describes the potential of this duo. Perhaps a lack of promotion or ironically limited sales were what killed off their full length, but after listening to this EP you’ll want to hear the rest of their “8 Million Stories” in full detail. If the album is lost, I hope Rhymesayers finds it soon – they could make 2003 a YEAR to remember.