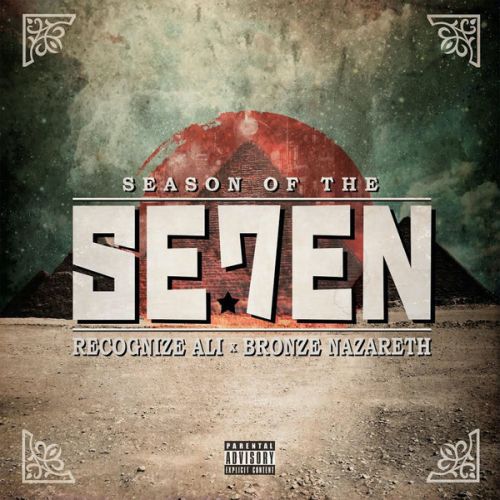 It’s one thing being a fan of the Wu-Tang Clan, but another thing entirely sifting through the litany of affiliates and citing highlights from what must be the biggest family tree this side of the Kardashians. A strength of many Wu-Tang affiliates is the thick New York accents emcees utilize to their advantage, possessing a Ghostface-like richness with their delivery. Trife Diesel may have my favorite Wu-Tang voice and it’s easy to see why he was taken under Ghost’s wing early in his career. The likes of Lord Superb, Willie the Kid, Hell Razah, Jojo Pellegrino through to influential Queensbridge artists like Tragedy Khadafi. Accra’s Recognize Ali (yes, he’s Ghanaian) may not be a direct Wu-Tang affiliate himself, but doing a project with Bronze Nazareth inherently adds another dotted line to the family tree. And like all those emcees I’ve mentioned, he possesses a dope voice that you may have heard recently on the Iron Wigs projects alongside Verbal Kent and Sonnyjim.

Given Ali has more than a hint of Killah Priest in his vocal cadence, much of this album is crafted along the lines of a Wisemen or Almighty LP. Usually what happens with these albums from emcees that excel in a group setting is that they struggle to hold the listener’s attention on the solo material. Recognize Ali is clearly a wise man himself, as he’s kept the best beats for himself and chosen not to include too many heavyweight guests. This keeps the focus on him, and even when you’ve got Willie the Kid’s distinct presence on “Olympic Gold Medallists” it’s a welcome addition rather than a tale of oneupmanship. Verbal Kent reunites on “Tear Drops in the Sky” with a predictably vicious verse, and there’s a battle between the two most productive emcees in the game: Napoleon Da Legend on “Rivers in the Basement of Truth” who demonstrates his knowledge as a hip-hop head; then Dom Pachino, who seemingly releases a new record every week, lends “Camouflage Dons” his two decades of experience.

Salute Da Kidd gives a solid performance on “Street Gospel” effectively setting up Recognize Ali for his impassioned rhymes whereby he must have left the pop filter dripping in saliva. It’s that fine line between full-on G Rap lisp and raspy aggression that hits a real sweet spot when the beat is on point. Bronze Nazareth may get second billing on the artwork, but his production is frequently the star of the show. The album Bronze put out with Roc Marciano last year (“Ekphrasis”) was too drab for my liking so hearing him inject that bounce back into his sampling put a big fat smile on my face. The title track “Season of Seven” may lack the impactfulness of a defined hook, but it possesses a truly majestic instrumental.

“How We Roll” benefits from Tone Spliff’s scratches and there’s a sample on “Silver Spear Promise” that I’m still frustrated I can’t locate. I want to say it’s on an AZ track. I wasn’t as keen on “Hand Count the Cake”, largely because it’s a bit too repetitive for its own good. Aside from this, the album seemingly improves with each listen and in Recognize Ali, Bronze Nazareth has found his best foil yet. I knew this was on Mello Music Group, and I knew I liked both artists’ previous material, and yet I was still surprised at how enjoyable “Season of the Seven” is a year after its release.