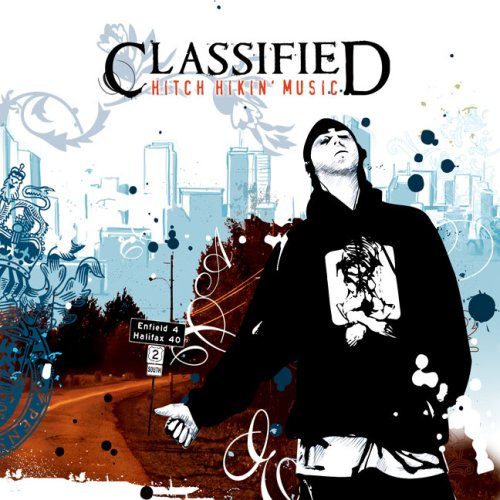 Classified really left an impression on this critic when he dropped “Boy-Cott-In the Industry” almost two years ago. With two years to work on it, there are definitely great expectations of “Hitch Hikin’ Music.” The first thing that stands out though is the odd title for Classified’s latest album. Hitchhiking just isn’t anything that anyone who listens to Hip Hop is likely to do, at least not on a regular basis. Maybe it’s the rash of murdered hitchhikers or hitchhiking murderers that got injected into urban folklore during the serial killer emergence in the late 20th century, but it’s been a long time since hitch hiking was a popular past time for America’s youth. It also has to do with convenience as even drifters are more likely to beg their way up to some bus fare rather than try their hand at hitchhiking. Of course Classified ain’t American, he’s from Canada and maybe in Canada hitch hiking is something you’re more likely to do as a young person. I’m not knocking Classified since American artists certainly don’t make sure their album titles have universal significance, but next time around “Bus Ridin’ Music” might give him a better chance of spreading his audience past Canada.

I only care about Classified getting love outside of Canada because I consider his music deserving of such widespread exposure. Overall, Classified is a dope producer and rapper. With his album he obviously puts the focus on the lyrical content of his songs, but he also includes some material which highlights his musical side. “Beatin It” is probably the dopest concept song I’ve heard this year. Classified starts out rapping A cappella talking about the process of producing beats. As he raps he plays different samples until he finds one he likes and he uses it to make a beat, but while he’s producing the beat he’s also rapping about what’s he’s doing. It’s a great track that gives you insight into Classified’s skills/process in beatmaking but also showcases his rhyme skills as he’s able to put together rhymes that make sense. The other track focused on Classified’s production skills is “Beat Auction II” where he holds a mock auction for some of his beats. This time around it isn’t as fresh conceptually, but it is a different skit than you would hear on most rapper’s album. For the remainder of the album Classified sticks to the usual formula for production, loop a sample, lay a drum kit and go. It results in dope songs for the most part since Classified has a knack for choosing tight samples.

Of all the songs on the album any rap fan would want to peep, “Cazual Drinking” is at the top of the list as it features Tash from Tha Liks. Though Tash is in top form and it’s great to hear from him since it’s been a long time since the last Liks project, Classified’s beat fails to match the usual energy of a Liks track. But in the end this is the only real “weak” track to be found on the album as Classified stays fresh throughout. On “Intro (Here we go)” he explains the album as he hitch hiked a lot when he was younger and hip-hop served as his soundtrack for those trips. Classified is also not afraid to take on serious topics this time around as he shows on “Freezin In The Cold:”

“Now ever since I took my wife’s hand for my life span
I feel like I’ve been spendin more time with my mic stand and my pipe man
Things are getting heated, almost got a nice tan
Head up in the clouds, I get too high, I got no flight plan
So what’s next? Should I keep speakin my mind
Keep on, readin the signs, tryin to keep wit the times
They say freedom is blind, and I can’t see the future
So I got to make it work, there ain’t no plan B for Luke here
I drop beats and spit bars and try to get established man
But I keep gettin barred from every bar establishment
I need to keep it focused like a camera lens
But I handle everything from music to the management
And I must be heaven sent, but I’m sittin at the bottom
I should be at a level 10, so where’s my medals man
They said music will influence the people who listen to it
So I’m tryin to contribute wit what I do, so get into it”

This isn’t the only track where Classified shows more insight as he tackles deeper themes on “Fall From Paradise,” “All About You,” and other tracks on the album. The battle rhyming Classified that we heard on previous items is still here, but it seems as he gets older he isn’t afraid to get serious with the music.

This time around Classified isn’t as fresh as he was the first time I heard him, but that’s a personal thing and not a testament for Classified’s skills. His beat skills are still up to snuff throughout the album. Lyrically, Classified is making large strides as he is relying less and less on battle rhymes and shifting towards a more general approach on the mic. Guest spots from someone like Tash and the songs about being a “Hip-Hop Star” are signs that Classified is slowly but surely heading towards more mainstream acceptance. With various award nominations and a South By Southwest appearance, one can only hope that next time around Classified won’t have to be introduced to the American audience. But even if Classified never manages to be a star in the U.S., his Canadian fans will continue to support solid albums such as this.