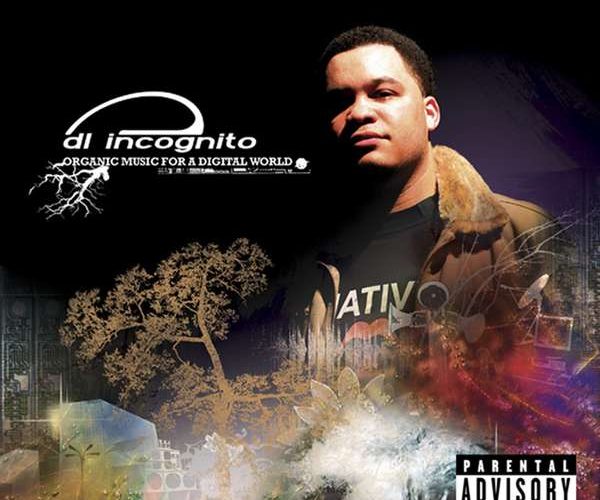 Unintentionally, some MC’s turn themselves into gimmicks. They get a strange stage name, conjure up fictional worlds with their words, put themselves in the shoes of people they couldn’t or wouldn’t be in real life. That’s good. Hip-Hop fans need gimmicks, fiction, and horror to escape real life from time to time. That also means we only get to see the side these artists decide to show us. He, or she, stays one-dimensional, not necessarily shallow, but one-dimensional. The Canadian underground dweller DL Incognito shows it isn’t always necessary to resort to gimmicks, and isn’t afraid to show the good and bad sides of his personality. Get your 3D goggles ready for “Organic Music For A Digital World.”

People who make a living with the pastime they love to do most, shouldn’t complain. I have heard this catchphrase come out of the mouth of countless extreme sports professionals, movie stars, and random celebrities with unclear pastimes. It’s no coincedence, every single one of them is successful at what he or she does, and popular with the general public. In their shadow, there is an army of security guards, busboys, and waitresses who think they have every right to be in their shoes, struggling for stardom. Hip-Hop artists are unequalled in giving a voice to those injured wannabes. Always trying to preserve their art, but also in eternal search of the appreciation of the large audience which could give them fame and fortune.

Maybe DL Incognito has a right to complain when he speaks of his inability to breach the gap between the underground world and the surface dwellers. His previous album were heralded by both critics and music lovers alike, and his sophomore album “Life Is A Collection of Experiences” was awarded the esteemed Juno Award. Juno Award? One of the most prestigious musical awards in Canada, which is DL Incognito’s home country.

This geographical misfortune has caused DL to be largely ignored in the neighboring country he so desperately wants to take by force (not Russia). Being Canadian must be the only reason he hasn’t made his break in the US, because his confident flow, distinct tone-of-voice, and steamroller bar spitting would have given an American cat a definite head start.

DL Incognito, whose name he interprets as ‘delivering lyrics on the down low,’ has skills on the mic which are surpassed only by his ability for self-reflection. Which MC you know of would willingly apologize to two women on a record: one his girlfriend, the other his mistress? Most artists would have you believe they are just as skilled at polygamy as they are at rhyming. In real life, they might be latent lap dogs, at the whims of their mistress with a credit card in hand. Somehow DL Incognito wouldn’t be caught in that switch stance, but he would be willing to use that same credit card for other enjoyments. DL Incognito doesn’t mind speaking of his fetish for rare, luxury footwear (“S.Y.S.G.U”), and cars (“Keep it Movin'”), which he can show off “stepping out of a Benz. That’s how I want to represent.” He reveals how he wants to pay for all those goodies in “Commerce,” which has an infectious hook with a generic outlook and a twist at the end:

Just as easily, he reveals his inner struggle after his mother died of cancer, which caused him to lose himself in his music for emotional shelter (“Nine Months”). He even touches on the transitoriness of life, without hinting at a spectacular ‘Tony Montana’ demise. While listening to this MC, you get the feeling he is an organic being instead of a digital personality. He sums it all up in “Farewell”:

“Will I be considered great without a platinum plaque?
Because I never did rap, for the sake of rap
I put thought behind my bars, but they slept on that
No gangster raps, no guns, no crack
No bodies in the trunk of a Cadillac
No immortal combat, I won’t live that long
When I die, will you paint a mural on the wall?
Will my brother be the only one to break my fall?
When I fall from grace
And my face is no longer a face
They will have a print on a magazine’s page
When I step off stage for the very last time
Will you comprehend I left enough checks to rewind?
Got my sign on A Sample and a Drum Machine
And on Life’s a Collection (of Experiences) gave a piece of me
By this third time might be my last LP
I make organic music for you digital peeps”

Nine Planets Hiphop resident DJ Techtwelve, largely responsible for the production on “Organic Music For Digital People,” shows as much versatile prowess as his lyrical counterpart. Without creating new musical boundaries, Techtwelve manages to concoct a different sound for every single composition on the album. “The Masses” contains menacing classical theme music, which Jerry Bruckheimer and the producer of the cartoon show ‘Transformers’ both could have used. “Horoscope” blends in Grant Green guitar notes with smooth night club piano tunes, and “Newera” features a wild guitar riff, which sounds like Pink Floyd (but probably isn’t).

The only criticism I could think of is DL Incognito’s occasional sidesteps into societal analyses, like he does on “Reality Bites,” On the second-to-last official track on the album, his lyrics become somewhat generic, with common places like “Racism is real,” and “The family is the most important thing in your life.” Without denying these words are very true, they do not fit in with the rest of the album.

DL Incognito isn’t the most revolutionary artist in the game, but I doubt he is trying to be. With the help of Techtwelve’s innovative boom bap treats, “Organic Music for a Digital World” is an album enjoyable for both backpackers and heads who don’t feel like listening to the insightful thoughts of this Canadian cat. That makes him, musically and lyrically, a three-dimensional artist, hopefully on his way to a fourth album and dimension.