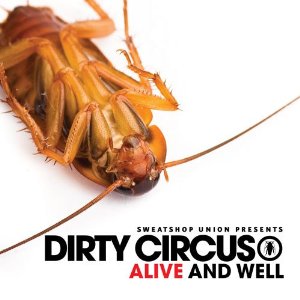 I never thought I’d ever have the occasion to interpret the meaning of a dead roach. While a dead canary to a miner used to be their only warning of danger, dead roaches have never been employed for similar useful purposes. That Dirty Circus uses a roach as their logo is really not out of the ordinary; roaches tend to be interpreted as conveying filth, dirt, and a general lack of sanitation. The dead roach on the cover, though, has more meaning than your typical dead roach. Their album is called “Alive and Well,” yet the creature featured on their cover is everything but. Considering roaches are some of the most resilient creatures to inhabit this planet, a dead roach is even more intriguing. Having exhausted my dead roach interpretation skills, I’ve come away convinced Dirty Circus isn’t your typical rap group without even hearing a single song. Now that’s what I would call an effective album cover!

Dirty Circus’ album cover isn’t the only thing to love about “Alive and Well.” Over the album’s 13 tracks, the duo of Metty the Dirtmerchant and Mos Eisley craft some of the most refreshing “golden era inspired” rap you’ll ever hear. I put “golden era inspired” in quotations only to emphasize that these guys are much more original than even they give themselves credit for. The golden era influence is there. Dirty Circus is a duo of emcee/producers who keep it true to the roots. Dope beats are paired with dope emcees. You won’t find any songs mimicking recent trends or trying to push the boundaries of what can be considered hip hop. That said, “Alive and Well” takes those roots and uses them as a foundation for something more. The beat to “Tryptamine Dream” is classic hip-hop to the fullest. You’ve got a mellow laid back bass line layered with jazzy pianos and horns and dope Nas lines scratched over the hook. Instead of filling the track with tired battle raps or bragging, Metty and Mos philosophize about the current state of their careers, lives, and music industry. The ability to transcend and innovate really sets “Alive and Well” apart from most golden era inspired album, or perhaps a better description would be that Dirty Circus is the first group to not use the terms inspiration and imitation interchangeably.

Either way, “Alive and Well” provides plenty of fresh, head nodding music. “Where I’m At” is an interesting take on the “represent your hood” song as the duo represents not only where they were born, but also where they currently live, chronicling the journey between in the process. “Into The Sun” is a balanced and open look at the true definition of happiness in one’s life. Even more impressive is the fact that guest emcees Shad and Geo drop verses that are 100% in stride with Metty and Mos’ vision for the song. The beat features hypnotic humming in the background and warm vocals in the hook, both of which contribute to the song’s tone of reflection and meditation. They recount their own personal devils and mistakes on “The Adversary In Me,” but the soulful hook only emphasizes that they have come out stronger despite succumbing on occasion. “Drama Free” shows the duo can even tackle love songs as they recall the women that have brought happiness to their lives.

Dirty Circus remains honest and open on every track. Paired with dope beats, the duo doesn’t falter once on “Alive and Well.” While the elements that go into this album are really nothing new, the end result is definitely not your typical rap album. On one hand, the album reflects the unique perspective of both Metty and Mos Eisley. On the other hand, the duo has the ability to take their unique life experiences and present them in a manner that is both accessible and interesting. The album presents a message of happiness and celebration of life, but as it runs its course it also promotes deep reflection of one’s life, how one got there, and where one is headed. While we all have to stop and reflect on life at some point, doing it to a soundtrack of dope music makes the experience much more fulfilling.