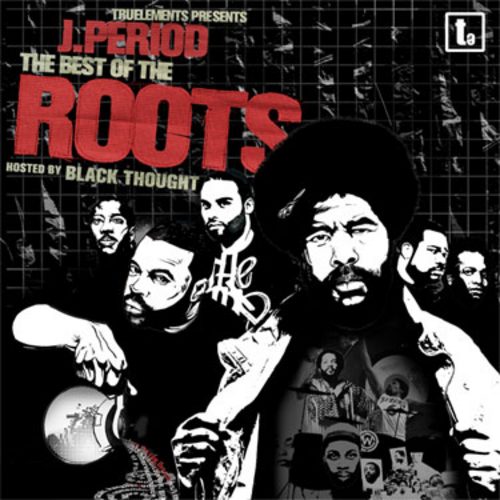 J. Period :: The Best of The Roots

Mixtapes used to epitomize everything great about hip-hop. 15 years ago before the internet spread its tendrils into every home and business, before compact discs completely took over the world and everybody owned a computer with a CD burner built in, a quality mixtape was a sacred bond between DJ and listener. You couldn’t get access to the records they could, and even if you could you wouldn’t know which ones you SHOULD. A mixtape DJ was a true architect, building bridges with scratches and freestyles before taking you from the great songs you already knew into worlds of music you had never imagined before. Mixtape DJ’s were so good at their craft that they in turn became household names, cats like Ron G and Kid Capri, and in turn they paved the way for DJ’s like Tony Touch and Funkmaster Flex to step up and catch wreck. Throughout it all there was the familiar feeling of the tape in your hand, the inevitably of playing it from start to finish, because even on the fastest deck it took forever to fast forward or rewind that cassette. And that was okay because you trusted the DJ to take you on a journey, your $10 or $15 well worth the trip.

Somewhere along the line things fell apart. About the same time record labels started paying mixtape DJ’s to get their music played, street level MC’s without record deals realized the mixtape was the perfect way to get their shit out, and often more lucrative than letting RIAA companies keep 95% of the profit and charge YOU expenses out of the remaining 5. Tapes stopped being an adventure through the amazing mind of a creative genius with an extensive catalogue of breaks and rhymes and turned into thinly veiled self-promotional albums with “exclusives” leaked to whoever was the hot flavor of the month. Without naming any names, I’m sure it’s pretty obvious which DJ’s I’m talking about. Their releases focus on one city or region of the country, and often focus on just one rapper or clique from that region, and they in turn put on a squad of D-level hip-hop celebrities with ridiculously mediocre rhymes. If one hip-hop song charts in the mainstream, the same 5-10 so-called DJ’s will use the instrumental for their “exclusives.” Creativity went out the window, replaced by a tedious monotony of stupidity not worth paying for and even less worth listening to. The sacred bond was forever shattered when mixtapes moved to CD’s, not only contradicting the name of the art but allowing for the free and random track skipping the more analog tape format could not. Mixtape DJ’s didn’t even have to try hard to make a good blend any more, because if the track was whack you’d skip it. Aaron LaCrate put it best: “What’s happened to the mixtape is a tragedy.”

Fear not though, J. Period remembers the good ol’ days, when a DJ Premier, Premier, P-P-P-Premier Premier Premier mixtape could give you that happy tingle that runs from the top of your spine to the tip of your toes. Even though this release is ostensibly labeled as “The Best Of…” that legendary Illadelphia collective The Roots, this CD/mixtape/whatever is a throwback to the days when mixtapes were done RIGHT. For sequencing and archiving purposes the production of this release was divided into 51 tracks, but the sheer # should actually tell you how ridiculous the idea of “tracks” on this mixtape is. J. Period seamlessly transitions from song to interlude to remix to hip-hop tribute over and over again, and never at any point do you want to reach for that “skip” button. At its core the release lives up to the billing, as The Roots extensive catalogue is widely explored, but if you’re familiar with how organic their music is then it should come as no surprise that a skilled craftsman like J. Period could reimagine it in a whole new way, with the blessing of the group’s membership throughout. The “exclusives” sneak up on you totally by surprise, as Period seamlessly transitions from classics like “The Next Movement” into Black Thought freestyling over the “Nas is Like” instrumental, and that’s just one of many examples. The Roots pay tribute to their influences by putting them right into the thick of things – Rakim, the Jungle Brothers, Big L and De La Soul among many others all get their shine on.

The end comes long before you’re ready for it, as the words of Jill Scott pay tribute as she says that The Roots are awesome and that Black Thought is one of the most amazing rappers in all of hip-hop history (both true). J. Period breaks us off with some unheard material right at the end, including “Break You Off” featuring D’Angelo and the ill as hell “Murder in the First” featuring Jay-Z. Then it’s like what, there’s no more? C’mon J. Period, don’t stop now! But all good things come to an end eventually, as you reach the tipping point and come down on the other side, but thanks to “The Best Of…” you’re already looking forward to the climb back up again. This mixtape achieves an amazing trifecta of hope: hope for hip-hop, hope for the future of the mixtape genre, and hope that the legendary Roots crew will come back one mo’ gen in 2007. In proving that the mixtape is not dead, J. Period has created a yearning feeling old school heads will remember fondly, while new school cats will simply dig the tracks and wonder why that last so-called “mixtape” CD they paid $20 for was so whack by comparison.