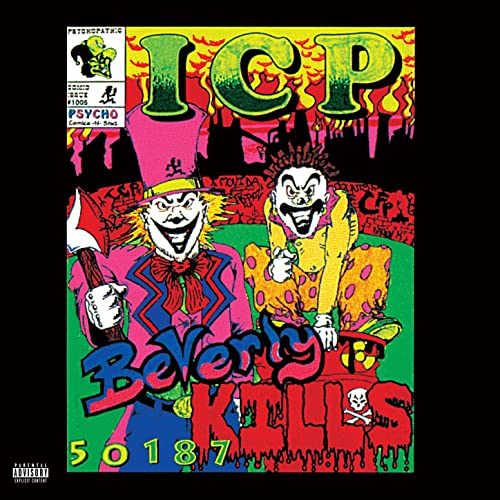 “Beverly Kills 50187” was a transitional album for the ICP. Coming two years after they first hit the scene as the Inner City Posse, one year after they rebranded as the Insane Clown Posse for “Carnival of Carnage,” and the same year they started to refer to their fans as “Juggalos” for the first time, it’s clear a lot of things now taken for granted about the group were in flux. Even the core lineup was unstable. Original member John Kickjazz left before “Carnage” was released, and for “50187” he was temporarily replaced by Greez-E. He too would be gone after this album hit stores. “50187” was also the first time 2 Dope officially referred to himself as Shaggy 2 Dope, establishing the name he’d be known by for decades.

“The Stalker” shows another element of ICP that would become a trademark of the group — breaking the fourth wall. The song’s outro features a real answering machine message left for Violent J’s then-girlfriend by her ex. Remember those? Answering machines? With physical tapes inside that would start playing after the fourth ring, then recording after the message had played? (Take your member berries. Mmm, delicious.) These days we just call that VOICEMAIL and it’s all digital. Back then it was a piece of physical media you could play back once, many times, or as was the case on “50187” for a potential audience of millions. I’m surprised that it didn’t lead to a lawsuit against ICP, but given her ex was literally stalking her (and thus possibly the inspiration of the song) I’m sure he didn’t want to go to court.

“Chop! Chop!” features another recorded message but that’s not what makes the song notable. The track is part of the world building the group was doing in their formative years, the “Dark Carnival” that became part of their Detroit mythos, complete with calliope sounds like a carousel and ICP’s invitations to “join the carnival circus” of madness. Violent J explains it this way: “I might as well mention, that I come from another dimension.” No matter how ludicrous, bizarre or graphic their tales might become, all of their tales are narrated from a pocket universe that exists solely for them. It’s punctuated by real words from our own universe though — O’Shea Jackson threatening a “Horny Lil’ Devil” with getting his penis cut off.

That too would become a trademark of Shaggy 2 Dope and Violent J, as they’d try to live up to the Insane part of their name with over-the-top horrorcore verses. “17 Dead” establishes their rap alter egos as serial killers. “You could give a fuck less nevertheless unless/something happened in your suburbs/I’ma cut your daddy’s neck, you little fuckin nerd/I don’t give a fuck where you’re from boy.” The carnage isn’t shocking unless you happen to be from one of those lily-white suburbs, which is what ultimately made the group so subversive and raised them to the status of counter-cultural icons. Their raps attacked the very same people who would become their biggest fans, bringing their fictional murderous zip code to the whole wide world.

“Beverly Kills 50187” may be a formative album for ICP, but don’t mistake it for being a great album. It’s perversely bloated, being only six tracks long yet still managing to clock in at over 40 minutes. Self produced songs like “Joke Ya Mind” wear out their welcome long before the 8:30 mark is reached. As important as the world building is to establishing the cult following they would ultimately garner, the album has neither the impact that “Carnival of Carnage” did before or the focus that future albums would find. Neither Shaggy nor J can be considered all-time great lyricists, but over time they found a niche and established themselves in it, attracting Juggalos from all around the world to embrace their alternative lifestyle. This release isn’t even a full step in that direction. It’s a half-step at best.