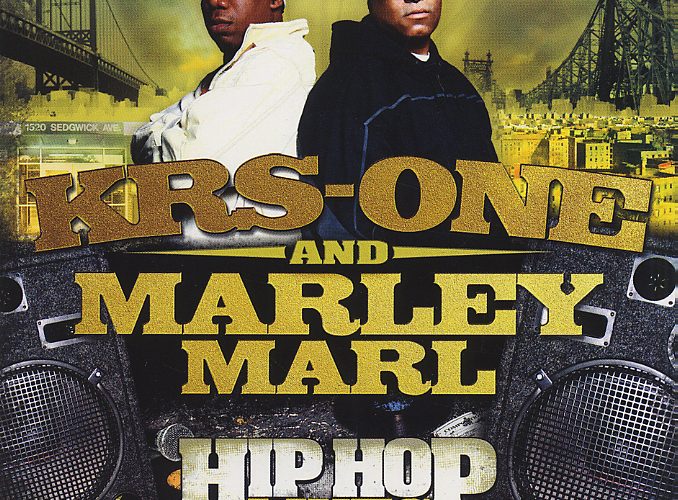 There are three purposes to “Hip Hop Lives”: to help reinvigorate the careers of KRS and Marley Marl, to reflect on Hip Hop’s past, and to prove that Hip Hop does indeed still live. It isn’t a rejection of Nas’ “Hip Hop Is Dead;” KRS refers to it as a “continuation” of that album. If the phrase “Hip Hop Lives” wasn’t a strong enough statement, the unification of KRS-One and Marley Marl (who have been at odds for years) certainly is. It’s not as huge as it would have been twenty years ago, but those two names on an album cover guarantees an interesting listen.

At its best “Hip Hop Lives” is a very exciting record. Marley Marl has updated his style of production dramatically since the 80’s, and these spare, pounding beats are perfectly suited for KRS. The best production here is some of the best KRS has had in the past decade. He manages to keep the album tight while bridging between dark beats like “Kill A Rapper” and more swaggering productions like “Nothing New,” while songs like “All Skool” merge 80’s and 00’s effectively. The middle of the record falls victim to a slight sense of staleness, but for the most part, “Hip Hop Lives” is very well produced, if not quite up to Marley Marl’s classic standards.

KRS presents more of a mixed bag. When he hits the concept on its head, “Hip Hop Lives” sounds like the great album it has the potential to be. He looks back on the start of his career with an astonishingly unbiased eye on “Rising to the Top,” actually praising Marley and MC Shan for how they handled their conflict with him in the 80’s. “Kill A Rapper” expresses outrage at the murder cases of rappers not being solved. And in the lead single “Hip Hop Lives,” the “Teacha” is in full form, bringing a new meaning to Hip Hop:

“Hip means to know, it’s a form of intelligence
To be “Hip” is to be update and relevant
“Hop” is a form of movement
You can’t just observe a “Hop” you got to hop up and do it!
“Hip” and “Hop” is more than music
“Hip” is the knowledge; “Hop” is the movement
“Hip” and “Hop” is intelligent movement
Or relevant movement, we selling the music!
So write this down on your black books and journals
Hip Hop culture is eternal
Run and tell all your friends
An ancient culture has been born again
It’s a fact!”

On the other hand, like on most of his albums, KRS gets much too caught up in bragging about himself. He deserves it, but it seems almost lazy here. “I Was There,” easily the worst song on the album, finds KRS stating that he was here for most of Hip Hop’s history. That’s true, but it just makes KRS seem old. And songs like “Nothing New” actually criticize the state of Hip Hop music, which seems somewhat out of place here. Looking back on the rich past of KRS and Marl is fine, and has a place here, but where Marley Marl’s work seems to reference that era, KRS at times seems stuck in it.

Weak moments aside, the record works excellently at most times. KRS is, as always, remarkably insightful. The best moments here find KRS at his absolute sharpest, managing to look back to Hip Hop’s past while giving a positive outlook on its future. His need to reaffirm his status in Hip Hop culture can be annoying, but it isn’t as prevalent here as on other albums. Marley Marl is very consistent, and sometimes even excellent in his production. This album achieves its ultimate goal, because with quality albums like these from Rap music’s veterans, it is clear that “Hip Hop Lives.”