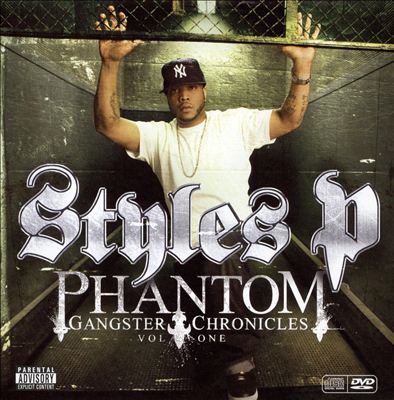 Nearly eleven years ago, The L.O.X. released “Money, Power & Respect.” This was unfortunately the commercial peak of the group as a whole, as they were subsequently fucked over by Bad Boy and other labels. Now if someone would have told me that Styles P would have the best discography of the group ten years later, I would’ve presumed Jadakiss retired or imprisoned. But alas, it’s 2008 and Styles P has three solid albums while Jada struggles to emulate the quality of his mixtapes and Sheek Louch is just trying to stay relevant.

While Jadakiss is attempting a comeback with Def Jam (recently leaked “Death Wish” is the best thing he’s done in a while), Styles P is stuck at Koch Records. With practically no promotion for the lead single of last year’s “Super Gangster (Extraordinary Gentleman),” The Ghost pushed a dismal 28,000 records in the first week. Thus it’s no surprise that “Phantom Gangster Chronicles” is such a lazy release. Pairing a compilation of nine rare SP tracks with a DVD of performances, the mixtape is more “Nastradamus” than “The Lost Tapes.”

It certainly doesn’t help that the first five tracks are tagged incorrectly. The track list claims that the opening cut is “Don’t Want It,” but it’s actually “Two Clap.” This is unfortunate, because it’s essentially the climax of the tape as far as Styles P’s rapping goes. A retitled version of “Stay Focused,” which appeared on several unofficial mixtapes, SP goes in on a meditative beat, rapping: “Me, I did a lotta shit // But no scholarship, give a crack head the ki’s, that Impala shit // Street life, don’t abolish it.”

Most irritating is that most of the compilation isn’t even Styles P rapping. “Cook Up” is a wack attempt at funk-rap, featuring the mediocre Next Generation but no Styles. Meanwhile, Styles P is only able to partially salvage the terribly repetitive “Real Nigga,” a Ray J tune that has no place here. Perhaps the mixtape’s worst offense, though, is its inclusion of AZ’s “The Hardest,” which was already released earlier this year on his equally under distributed “Undeniable.” Despite boasting the best verse on the tape (from AZ, not SP) and a melodious Large Professor beat, it’s objectionable to have it sold back in the guise of a “rare track.”

While the DVD may hold some value, nearly any Styles P mixtape you can findâ€”especially the Supa Mario tapesâ€”is better than “Phantom Gangster Chronicles, Volume 1.” As this is the kind of release only hardcore D-Block fans would likely buy in the first place, the CD is nearly worthless considering most of these songs are already widely available.