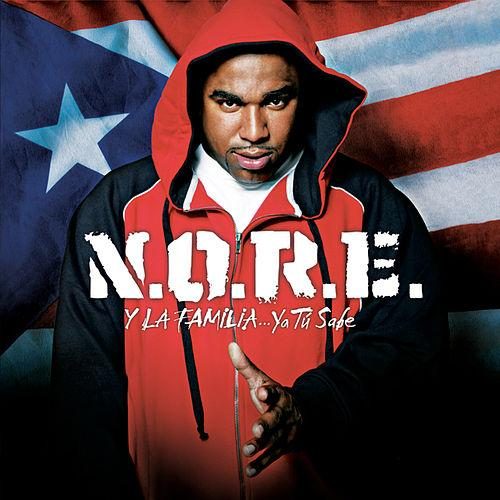 Officially Noreaga’s last album was in 2002, when “God’s Favorite” came and went with very little fanfare. Unofficially he dropped an album in 2004 via his own Thugged Out Militainment crew called “What Up 2 Da Hood,” although in fairness that was more of a mixtape than a solo effort. N.O.R.E. has found ways to stay in the public eye with or without the albums in stores though, and a large part of that can be attributed to the growing popularity of reggaeton music. Growing up half-black and half-Puerto Rican in LeFrak City, Queens as Victor Santiago, N.O.R.E. got the best of all worlds – a mixture of proudly distinctive hispanic culture and the strong New York City vibe that gave birth to hip-hop. Noreaga has always represented both going back to the days he and Capone founded the cult favorite rap group CNN, but has certainly expanded more on his latin roots as a soloist. The biggest step forward on that front helped push reggaeton towards the mainstream in 2004 with the popular song “Oye Mi Canto” starring Daddy Yankee and Nina Sky. Actually he may have been on the remix of Yankee’s smash hit “Gasolina” first but both were so big in 2004 it’s hard for me to figure out which came first after this long.

That in a nutshell has been the problem for the last two years – N.O.R.E.’s failure to capitalize on the very movement of bringing reggaeton into both hip-hop and mainstream American music which he helped to spearhead. As both “Gasolina” and “Oye Mi Canto” continued to chart a new N.O.R.E. album was nowhere in sight. Finally after all this time the long-awaited “Y La Familia… Ya Tu Sabe” has dropped and it should be no surprise that “Oye Mi Canto” is on the disc, but after this long most people either bought the single or picked up the track on other compilations (bootleg and otherwise) so it’s too late to help his sales one bit. Nonetheless the SPK track allows his guests and N.O.R.E. himself to rock out a beat with some WAY down South flair, as he and Yankee trade couplets, Sky rocks the Big Pun inspired “boricua, morena” hook and guests Gem Star and Big Mato get their chance to rock. As N.O.R.E. himself says on the song, “And this the first time this ever been done, because there’s never been/ a rapper do a reggaeton album and he a veteran […] no matter your race, because today you’re latino.” The lyrics in english OR spanish couldn’t make it more plain – if you hear the song and you’re feeling the vibe you can get down too. That kind of inclusiveness has made reggaeton popular worldwide.

N.O.R.E. is definitely being inclusive throughout “Y La Familia,” which is more to his advantage than disadvantage. Noreaga has never been the best lyricist – in fact the sheer stupidity of his lyrics on songs like “Superthug” and “N.O.R.E.” was what made him a superstar. N.O.R.E. always makes up for what little he has to say by how much passion and charisma he says it with, which makes phrases like “gettin head in the whip and not, crashin it” popular both because AND in spite of how ridiculous they are. By adding more people into his mix Noreaga both lowers the burden for having to carry an album and increases the lyrical viability of the album in EITHER language, allowing him to simply be the charismatic thug he is when called for and not worry about any kind of “dopest rhymer” credentials whatsoever. The guests run the gamut from well known hip-hoppers like Fat Joe and Lil Rob on songs like “Mas Maiz” to well known reggaeton stars like Don Omar on “Reggaeton Latino” to combining both together on “Bailiar Conmigo” and mixing Don Omar with Diddy and Big Mato.

The good news is that if you already like reggaeton music, “Y La Familia… Ya Tu Sabe” is going to be right up your alley. The bad news is that if you don’t like the rhythm of reggaetone this album isn’t going to work for you, especially given SPK produces a majority of the album and does the recording and mixdown even when he’s not, which means the same tempo and beat tend to repeat themselves throughout. Even when you see Ja Rule listed on a track called “Cuchi” and you might expect a thugged out New York rap track like only the two of them could do together, it’s still got the reggaeton beat and sound. In some ways I miss the “Melvin Flynt” Noreaga, but in other ways I’m perfectly happy with the “Oye Mi Canto” Noreaga since it actually seems to fit him a little better. Still though one has to wonder how many of his fans who expect that trademark Neptunes beat and his classic “so dumb they’re actually smart” rap lyrics would pick up this album and wind up dissapointed thinking they bought a Daddy Yankee album by mistake. “Y La Familia” is not for everyone but if you’re already down with “Gasolina” the odds are you’ll enjoy it whether it’s exactly what you expected or not.