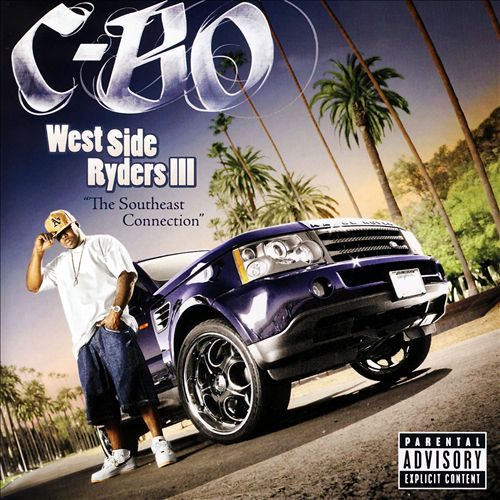 C-Bo is back with another installment in the “West Side Ryders” series. In his compilations C-Bo collects all the rappers on his West Coast Mafia roster, calls in favors from around the country, and delivers collections of songs that give us a pretty good idea of what’s going on in the world of hardcore gangsta rap. This time it’s no different as C-Bo drops a sampler of music sure to provide at least a lil’ something for every rap fan. Long-time affiliates Spade, 151, Spice-1, and Brotha Lynch Hung all show up on the album giving fans something to tune in to. Being the businessman that he is, C-Bo also drops tracks by his lesser known artists and gives plenty of newcomers a chance to shine.

The benefit of C-Bo’s compilations also tend to be the negative parts of them since you can expect absolutely no consistency. You just get a whole lot of tracks, some you’ll like while others you’ll hate. One of the best tracks on the album is “Street Life” performed by The Realest. It’s hard to imagine that the same guy Suge Knight forced to impersonate 2Pac is the guy rapping on this track. Over a smooth mix of piano riffs and synths courtesy of Marvin Paige, The Realest drops dope gangsta lyrics:

“Kiss my nine millimeter cuz your life’s gon’ end
Intoxicated, born a rebel, God forgive my sins
My closest friends are no longer that
I touched the cell and made all them niggas fuckin’ scat
You scared pussy cats
Allah, please help me make it now
I got game from my pops so ain’t no way that you can take it now
I’m on the scene like a fiend with these drugs in me
Ain’t no needles involved homie just hella Henny
Bury me smiling, 50 Gs in my pocket
In case I make it up to heaven ain’t no way you can stop me
Gotta sit back and think about my past as well as my future
Cross my currency and watch how I do ya
What about Gotti? 40 glock shotties close at hand
Drop the glocks, we can box, nigga show me ya man
I don’t know about these niggas, they ain’t built the same
I lost a lot of spect, got the beef with 50 and Game
Niggas change, whenever money’s involved
Your life don’t mean nuttin to me, nigga fuck being hard
You can get it”

The funny thing is that this track brings positive comparisons between Pac and The Realest, while he was generally dismissed when on Death Row. The Mob Figaz drop by for “Sometimes” which is a great track but it’s disappointing since it was released on Jacka’s “The Jack Artist” a few years ago so it’s nothing new. “When We Mob” is another dope track courtesy of Young Bleed and J-B. Young Bleed has always been widely slept on and impresses here even more as he pulls double duty as the producer. Another dope song comes from cult favorite X-Mob which come through with the hardcore anthem “Around Here.” Averexx drops an average southern bounce track and the lyrical content is just raw gangsta rap, but the combination is surprisingly enjoyable.

Of course for every quality track there is at least one track that’s not so dope. The worst probably has to be “BTK” by Woodpile. The group had to be mentioned if only because of all the controversy surrounding their “white pride” message. Personal opinion aside, the group just plain sucks. Their flows are off, lyrics are simple, and even the beat is something that would have barely made the cut back in 1995. If this is the best the group can put out I have no clue why C-Bo signed them. Other weaker tracks include “Hurtin’ Ya’ Self” where Young Dise sounds like he’s impersonating all the weak East Coast mixtape rappers we get fed every week. Even Spice 1 dissapoints this time around with “Supa Fly,” an uninspired track dedicated to Lamborghini style doors. For one he produces the beat himself, disappointing with a simple beat and two note melody. Second, the hook is simple and not all that catchy.

Weak tracks aside, C-Bo achieves his goal with this compilation. See, you might drop your money for an album where you might only like half the songs, but in the long run you save money since you know who you like and who you don’t for future purposes. Of course, that requires that you not already familiar with most of the rappers on the album. So if you’re not familiar with most on the names here, this would serve as the perfect intro. If you’re already a fan you’re probably better off hitting up iTunes and picking just the tracks you want. Incidentally, if you’re a hardcore C-Bo fan there’s not much C-Bo to be found here as the focus is on other artists so patiently wait for the Cashville debut.