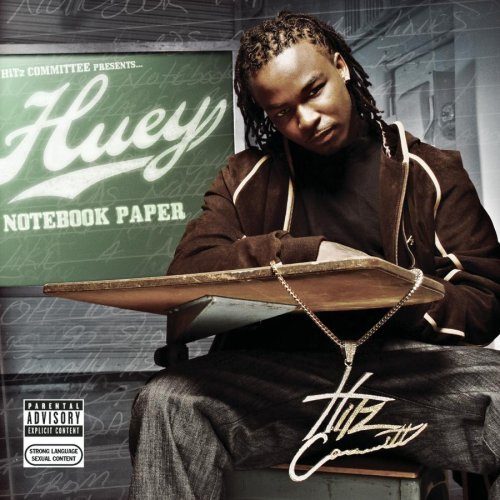 On occasion as a reviewer one becomes painfully aware of their age just looking at an artist’s bio. For example Lawrence Franks Jr., better known to his rap fans as Huey, was born on New Year’s Day in 1988. I would have been 13 at the time, my birthday is on June 20th, so you do the math – I was going to college when Huey was going to kindergarten. The album’s title reinforced this point to me – I can’t remember the last time I used “notebook paper” for anything. If I do take notes at a concert or a show I either take a pocket PC or use small yellow legal pads which are easier to see in the dark and can be bought cheaply in bulk. Of course for the 19-year-old Huey we’re not meant to glean he’s concentrating on an academic career, even though his album depicts him sitting at a classroom desk with a chalkboard behind him. As he explains on the “Intro” he simply filled up a notebook with rhymes which he now intends to turn INTO paper, the kind that’s green which you can spend on new kicks and iced out chains. No doubt he’s already made a lot of that paper on the basis of his first hit “Pop, Lock & Drop It”:

“Tonight it’s gon’ be some changes, no actin sadity
So stop actin and get it clappin cause I’m knowin you feelin me
Yeah you cute, but don’t let that shit go to yo’ head
Cause what this cutie won’t do, pimpin another one will
You prepared rockin a skirt and ya heels so tall
And we ain’t wit none of that trickin but our bills so tall
I been peepin you fo’ a while and you throwin it back
If you lookin for you a baller, we got dough in the back
Look your color carmello brown and yo skin so smooth
I’m havin fantasies about what you and me can do
And you a undercover freak, you probably thinking the same
I’m seein light up on your face because you peepin my chain
And I ain’t tryna put you out thurr, as if you a freak
So don’t even take it that way just say you did it for me
And yeah you probably roll wit me cause it’s money in my pockets
So before THEN I gotta see you pop lock and drop it”

D’Andre ‘Po Po’ Smith produced a slow and low beat for Huey tailor-made for the dancefloor, but undoubtedly it didn’t hurt that this song was also featured in the movie and the soundtrack for “Stomp the Yard.” Huey’s elongated pronunciation of the word there as “THURR” probably doesn’t hurt either, as the St. Louis accent has long since been popularized by other rappers like Chingy and Nelly. Not surprisingly when a song hits as big as “Pop, Lock & Drop It” hits, it’s irresistable for both the artist and his label to come with a remix and extend the shelf life of the song. Some may wish they had taken a chance and done more to change up the beat, but it’s the age old case of not fixing what isn’t broken to begin with, and adding on T-Pain and Bow Wow definitely gives the track new flavor:

Bow Wow: “Hey what it is, they call me Bow Wizzle
Now pop, lock, drop it for me, make that thang jiggle
Yep, she moves her hips, just like Shakira
If she was in a contest, she would be the winner
From Ohio all the way to St. Louis (uh huh)
Hey all the girls do it, just put your back into it
Now shake what she gave ya, I’m talkin bout ya mama
If you won’t do it for ME then do it for these dollars
Cause I’ma make it rain, these other dudes is lame
They talk a good game, but they cain’t do the same (nah)
Now drop it up and DOWN, now take it to the GROUND
If you wanna please me, baby all you gotta do is
(Pop, lock, and drop it) But baby don’t stop it
We can do it like Chris Brown girl and ‘Get it Poppin’
Man I’m a pro, (yep) look, I’m far from a rookie (that’s right)
Girl get your pretty self over here gimme them cookies”

T-Pain also produces and appears on the smooth track “Glad 2 Be Alive,” a song title which makes the song’s content rather obvious. In fact “rather obvious” is something that could be said of most of Huey’s tracks and their topic matter. The Stargate produced “Nobody Loves the Hood” is a tale of St. Louis woe where “either you was with momma, or never had a daddy/or you never had neither and was raised with your granny.” Laudie from Tha Nod Factor krunks it out for Huey’s “Closet Full of Clothes,” which shows just what the fashionable Huey is spending all of his notebook paper on. The only way “2 Nite” could have been more obvious is if it had been titled “(It’s Going Down) 2 Nite,” but it’s hard to knock J$Mil’s slithering funk or pounding bass and or Huey’s rapidfire Twista-esque delivery on the track.

“She torquein them hips (yeah) lickin them lips (yeah)
God damn she know how to turn a nigga on
Got a pretty face (yeah) got some nice waist (yeah)
God damn I can’t wait to be gettin her home
Urr’ybody in the club that shows up
Women sippin on Mo’, no colder
Now they preferrin to err/urr like, ‘Know what?
We can leave right now cause I’m to’ up'”

If you’re looking through Huey’s notebook to find anything deep or substantive then dissapointment is bound to ensue. Huey is superficial and proud of it, living a motto once espoused by the late great Notorious B.I.G. of “money, hoes and clothes.” For Huey that proves to be largely effective simply because his Midwestern accent and flow differentiates him from similarly balling rappers from the East, West or South but if Nelly had released an album this summer it would probably be game over for Huey and it’s not too late for the original St. Louis rap kingpin to do so. The production is largely good and several songs like “When I Hustle” featuring Lloyd are radio ready, but the feeling overall is that this album was carefully packaged and planned in a corporate record label’s hitmaking factory. “How can we make our newest rap artist a hit? We’ll take a little of X, a little of Y, add it to Z and out pops a gold record.” It’s probably going to work and more power to the 19-year-old for getting all the “Notebook Paper” he can in the process. My advice would be to invest that paper in stock so if or when the formulaic approach stops working he won’t have his cars and chains reposessed.