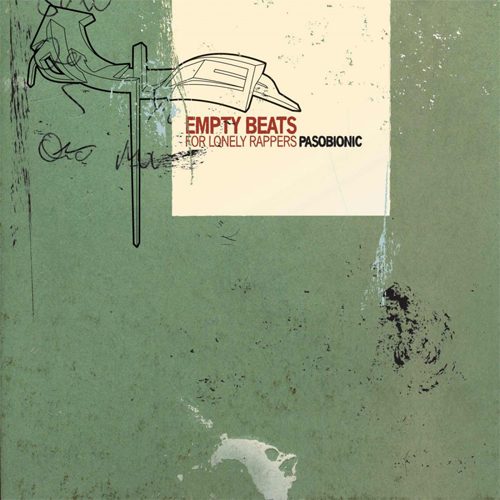 Whether it was Commonwealth understatement or wry producer humor that got a hold of Pasobionic, the title of “Empty Beats for Lonely Rappers” couldn’t be more inacurate. These beats aren’t empty at all, and lonely rappers can go host their own _Flavor of Love_ or something, because they won’t find unoccupied beats to rock over here. What the Australian with Pakistani roots delivered in early 2005 is much more than a beat CD, it’s a scenic walk through an instrumental wonderland. Not in the sense that new surreal surprises wait around every corner, but in that it touches the right nerves to come alive before your mind’s eye. Accurately divided plots in song form are mapped out for sober, steadfast percussion to proliferate, for docile flute melodies to grow, for sharp scratches to sprout, for delicate guitar loops to blossom, for somber basslines to twine in tendrils, for mystic voices to soar towards the sun, for spright vinyl crackles and pops to be rinsed across the surface.

While seemingly simple in structure, Pasobionic’s music undergoes multitudes of subtle changes as given ingredients interact with each other in various combinations, such as in the quasi-title track “Empty Beat for Lonely Rapper,” an amalgation of muffled but melodic basslines, murky piano taps, cutting, silent singing, a Jeru The Damaja sample, and various unidentifiable melodic and rhythmic bits and pieces. From the sound of his solo debut, Pasobionic is a man with a lot of patience, even if not with a lot of time at his hands, as he created it in between handling production and deejaying duties for prolific Melbourne crews Curse Ov Dialect and TZU. His analytical ear shows itself in the way every single recorded tone seems to have been carefully attended to, in how distinctly shaped even the most obscure element is.

A fine example of Aussie hip-hop from the sonic outback, “Empty Beats for Lonely Rappers” is one of those instrumental albums that slow your metabolism down a notch. In another time it might have been labelled trip-hop or downtempo. Recalling DJ Shadow’s taste in drums and DJ Krush’s taste in samples, yet still programming at his own pace, Paso creates conceptual compositions that keep their eye on the prize – to evoke moods. Said moods tend to rest on the darker side of the emotional spectrum. Starting out on a ghostly, eerie note, the album nevertheless develops a certain quirky charm. In “Hollow Bones” clear string sounds and melodic scratches enter into a dialogue with the rhythmic centerpiece, a combo of cello strings and strategically placed funky bass stabs. “Dislocated” schizophrenically switches between airy parts and abrasively sawing strings. Yet whenever the album risks becoming nightmarish, neurotic, esoteric, experimental, or sentimental, either the straightforward rhythmic foundation or the playful arrangement are there to create a balance.

Where producers that have to cater to rappers are forced to stay focused, on this project Paso can extend on musical themes and extrapolate. “Echoes of Blue” (previously released on the local “Ants Farm Aphids” compilation) has xylophone pings and a classical piano both playing the same melody, as the higher BPM rate turns the six-minute song into a kind of meditative b-boy theme. “Dead Like the Young” is Paso driving drunk, the beat swerving off the road and getting back on track. Through all the changes, the emotional core of each song remains intact. Many hip-hop variations, by their structure and/or their samples, fall under some sub-genre of funk, jazz, soul, etc. “Empty Beats for Lonely Rappers” on the other hand is relatively independent from its sampling sources. While largely built from samples, they are stripped of their sampleness, so to speak. They are fully absorbed by their new dark, heavy substratum. Despite that, sometimes Paso can just let a sax be a sax (“Rockingchair”), and though intriguingly chopped and looped, the piano that opens “Empty Beat 4” doesn’t pretend to be anything else but a piano. Repetition and monotony lurk occasionally, but in its entirety “Empty Beats for Lonely Rappers” is an entertaining trip down melancholy lane.