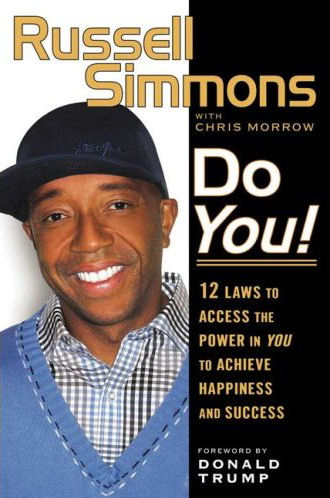 Russell Simmons :: Do You!

When most people see a book that’s written by a Hip-Hop mogul such as Russell Simmons they expect one of two things, either an autobiography, which Simmons has already done, or a book about Hip-Hop. Do You!, however, is a shift from such books that are currently cluttering numerous sale racks, instead it’s Simmons taking a look at his life and the 12 laws he’s lived it by that he feels have helped to create his many success both in business and in his personal life.

One of the most interesting things about Do You! is that Simmons openly admits that none of the base information is new, that it can all be found in various religious texts. What can’t be found in those religious texts, however, are the stories Simmons relates regarding how the laws have helped him. It’s one thing to read a rule about sticking with one’s vision, it’s something wholly different to then find out how much money Phat Farm was losing at its inception and the many pitfalls Simmons experienced in the company’s first few years.

Do You! features, for the most part, common sense rules, things we should all know. Sadly, common sense isn’t as common as it used to be. We also tend to forget, or take for granted, a lot of common sense things that could be better utilized in everyday life, which is something Simmons constantly addresses in the book.

The lone issue I have with Do You! is Simmons’ insistence on pounding his love for yoga into everyone’s brains. We all understand what it’s like to find something you love that you feel is helping you in every aspect of your life, but Simmons goes a bit overboard with the yoga chapter, which most readers can simply skim.

For the most part Do You! is a very enjoyable book and is worthwhile for anyone who has a goal in life. It’s a quick read, and even with limited time one can easily finish it in two weeks or less. Don’t think of it as a Hip-Hop book, however, think of Do You! as some basic life rules with a Hip-Hop flair to them in the form of Simmons’ stories. All in all, it’s a great read for inspiration, or even simply as a reminder of what we should be doing to find our place in the world. I highly recommend it and have already lent my copy out to quite a few folks.