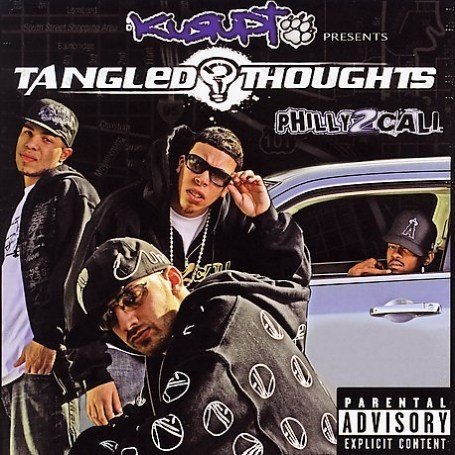 Technically the name of this album is preceded by the words â€œKurupt Presentsâ€ to ensure that all know that Tangled Thoughts have the co-signature of the Dogg Pound gangster. Even in their press kit they refer to the album title as â€œKurupt Presents: Tangled Thoughts Philly 2 Cali.â€ Labels and artists often use the â€œpresentsâ€ line to give new acts a little more credibility, but in this case Kurupt may have taken it a bit too far. Trying to find an album by Tangled Thoughts is difficult since â€œPhilly 2 Caliâ€ is listed as a Kurupt album by most retailers. It’s an unfortunate occurrence since Kurupt’s attempt to get attention for his new group may end up overshadowing the group. Aside from being down with Kurupt, Tangled Thoughts has a lot more going for it. The trio from Philly consists of emcees De and Cas and Tek who pulls double duty as a rapper and producing the entire album.

The first impressive thing about Tangled Thoughts is the production from group member Tek. Listening to the CD one would think the group hired a variety of producers from all coasts to provide the beats, but instead Tek comes though with a collection of quality beats that provide plenty of variety. â€œPhilly 2 Caliâ€ sounds like a down south anthem, complete with rolling drums and a screwed up hook. The beat for â€œAnutha Night in L.A.â€ represents its title well as the smooth guitars, high-pitch synths, and deep bass are ideal for a ride through the streets of L.A. For many producers, being able to switch styles so easily would lead to accusations of not having their own style, but Tek does what he does so well it doesn’t matter if he is jacking someone’s style. â€œTil The Sun Comes Upâ€ sounds just like the production from Miami’s The Runners, famous for Rick Ross’ â€œHustlin’.â€ The thing is, it sounds as good if not better than anything The Runners have put out so one can’t really complain. Overall, regardless of the style he chooses to adapt, Tek is a talented producer and Tangled Thoughts already have a big advantage having him as a house producer.

The Kurupt co-sign does help the group as they have an impressive line-up of guest spots for an up and coming group. Aside from Kurupt, his brother Roscoe, and AK (who collectively appear on 8 tracks), Tangled Thoughts also gets appearances from Ab-Liva, Freeway, and Sen Dog and Mellow Man Ace. With three members already in the group, all the guest spots are a bit overwhelming, but some do work quite well. â€œPuttin’ Work Inâ€ features Sen Dog and Mellow Man Ace in the form of The Reyes Bros, but Tangled Thoughts don’t get outshined:

“These rappers better be real (B. Real), My shit is a sin, dog (Sen Dog)
Gon’ take a Mellow Man to calm me when I’m pissed off
Only be a minute before your boy get chipped off
And the whip sits on 24s when it spits off
And it’s a T-H-O Reyes thing, Other rappers out there sounding like Chingo Bling
Now the Eses with the tats on they necks and they backs
On the set with they straps, and they all got my back”

Overall, Cas, De, and Tek are a mix of gangsta rap and battle rap, with gangsta rap gaining the edge. They don’t tread any new water as they stick to the usual topic matters one would expect from gangsta rappers. Tracks like â€œThat Hood Shitâ€ and â€œEvery Hood’s the Sameâ€ aren’t necessarily fresh, but very tolerable for hood anthems. The group fares better on tracks â€œLike A â€˜64â€ and â€œThese Jawnsâ€ where they show they can create fresh music despite their lack of originality. â€œLike A â€˜64â€ is the West Coast version of R.Kelly’s â€œYou Remind Me of Somethingâ€ and comes out much better than Paul Wall’s attempt of comparing women to cars on â€œThe Day All Hell Broke Loose 3.â€ â€œThese Jawnsâ€ would be your typical dedication to obsessive groupies, but the smooth beat and hook make it an entertaining listen.

In the end, Kurupt’s presence on the album is both a gift and a curse for Tangled Thoughts. Die-hard Kurupt fans are not a bad place to start for a new group, but this might also limit the group since those who don’t like Kurupt are likely to pass on this release. They’ll miss out on a group who holds their own and crafts a unique sound that transcends geographical boundaries. Hopefully next time around Kurupt won’t feel the need to overshadow the group and Tangled Thoughts can start building their own fan base.