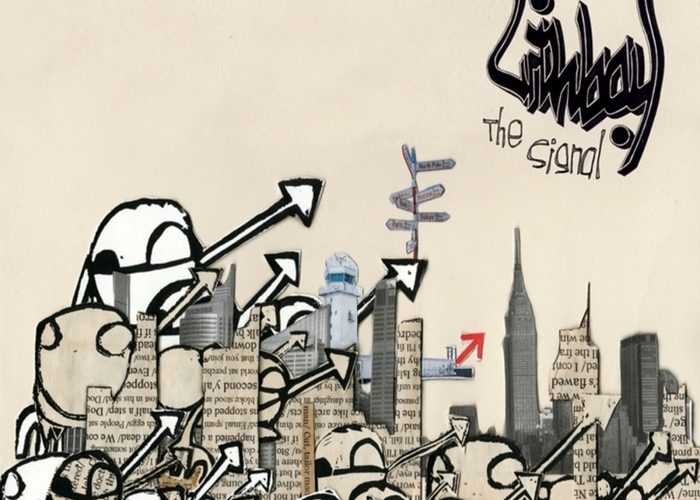 (Note: The writer of this review did not receive a track listing for the advance copy of “The Signal,” so all songs will be referred to by track number.)

This site has gotten a rare dose of Australian Hip Hop in the past week, withUrthboy’s previous solo album, and the review of the Herd’s (of which he is a member) “The Sun Never Sets.” Not for nothing though, Urthboy and the Herd are a fresh, if somewhat different, interpretation of the art form. If anything, it is a testament to just how strong Hip Hop is that it can stretch past America’s borders so effectively, only gaining from the influence of different cultures.

Urthboy, in particular, is such a refreshing listen because he is something of a throwback in American Rap. Urthboy is just a guy who wants to have fun, and when he’s in the mood, he’ll switch it up and tackle deeper subjects. “The Signal” has a cheery bounce the whole way through, as if reflecting the sheer joy Urthboy takes in creating it. As he states in “Track 02,” “when I think of all the things that I could have put my heart into, the truth is, there’s nothing that I’d rather do.” And with an album that is strong the whole way through, Urthboy has indeed put his heart into it.

“The Signal” begins on a fine note, with Urthboy “sending out the signal,” with Urthboy flowing effortlessly over a bouncy beat. “Track 01” proves the perfect introduction: very good and reflective of the rest of the album, while leaving the listener waiting for more. It only takes until “Track 02,” Urthboy’s ode to Hip Hop, for him to hit full stride. Keeping the fun, bouncy feel to the music, Urthboy is the rare rapper who can get across strong themes while remaining fun and entertaining. He approaches every song with an utter lack of pretension, never taking himself seriously. Far from making him into a joke, his down-to-earth vibe creates an instant connection between himself and the listener.

While Urthboy is usually in good humor, “The Signal” does have its more serious moments. “Track 05” is the first of these, as the production lends an ominous tone to Urthboy’s cinematic lyrics. This paranoid song functions as an interlude; “Track 06” returns us back to the bouncy, rollicking fun that most of the album presents. These small, sharp changes function well to bring the album together, and Urthboy is as savvy with the creation of the album as he is a lyricist. He can makes songs like “Track 05” and “Track 06,” which seem to be polar opposites of serious and silly, and then come back on “Track 03” that seamlessly blend the two:

“Dedicated equally to ride and mourn
The numerous grey areas that we divide along
I don’t know!
Maybe it’s something of a hybrid song
‘Cause the truth couldn’t give a shit what side you on (ha!)
It just is, whether or not the vibe is strong”

The production of this album is excellent, without being overwhelming. Its job is to create a mood suitable for Urthboy to flow on, and it is always more than up to the task whether it’s the head-nodding piano and bass driven “Track 04” or the paranoid guitar notes of “Track 09,” the production instantly creates a vibe, and Urthboy’s lyrics always fit it perfectly. The first and third songs are a little too simple, but other than those two, the production is uniformly top-notch, and always well-suited for the album’s star.

And Urthboy never disappoints. He can rhyme with the best, tackle both silly and serious themes equally well, and his delivery is a pleasure to listen to. He doesn’t just flow over the beat, his voice moves with it, catching the drums and pitches perfectly. He’s a pleasure to listen to, and this is only amplified by the fact that he is an excellent writer of rhymes and hooks. He raps and sings many of his own hooks as if he were born to it. And though most of his rhymes are casually playful, he has an excellent range of themes, covering them all convincingly. By “Track 13,” the ending of the album, he has nothing left to prove, and yet closes it with the most personal, hopeful song of “The Signal”:

“You should see the way she greets me
With a day-changing smile she heats me, arms out to reach me
Years down the track, could it be that it’s so easy?
I’ll keep believing as long as she still needs me
Steady as the great old earth
I find I’m envious of old folks who stay together until they’re broken
Still flushed from rushes of love to the head
Even after the years worth of words said
I want to share a deck chair and there-
On my worn out hands in your beautiful grey hair
And we’ll laugh about what we worried of in our twenties
And we, never stopped to consider if we were ready
And we rarely place the penny with any priority
We could Groundhog day without any monotony
Our love never sought no headline
Nor sought no deadline
Hear we are again, its bedtime”

The success of “The Signal,” however, isn’t in the lyrics or the beats. “The Signal” is a magnificently produced album, flowing flawlessly from song to song without jarring or boring the listener. No one song stands out because they are all part of something greater. With “The Signal,” Urthboy has produced a magnificent, unified album that stays true to his artistic vision. This album is a triumph on all levels, an excellent work of art that is endlessly entertaining.