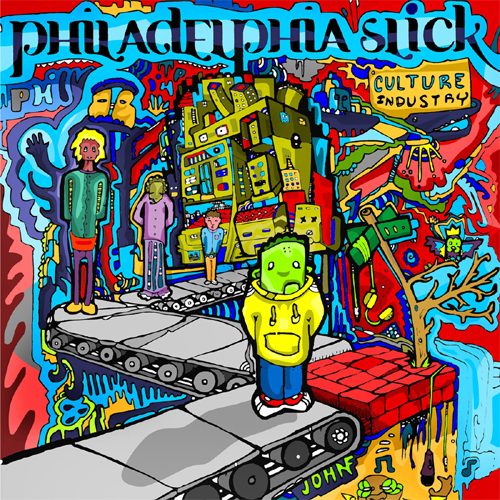 When you run across a hip-hop band, comparisons to The Roots are inevitable. It’s even worse when that band hails from the same city as The Roots. It doesn’t help the cause when every hip-hop band is also on the same conscious, positive, organic tip that The Roots have been pushing for well over a decade. For once, I’d like to see a hip-hop band with some gangsta ass content, just for a change of pace. Philadelphia Slick, though the name sounds like that of a cold pimp, is actually a 10 piece hip-hop band featuring 2 emcees, 2 horn players, 2 string players, 2 keyboardists, as well as a drummer and a bassist. After getting over The Roots comparisons (damn it sucks that the ONE famous hip-hop band is also one of the best hip-hop groups/acts of all time), you find that Philadelphia Slick is actually pretty good at what they do.

“Brave New World” kicks things off and is an abstract trip into conspiracy theories and social commentary. Lyrically, it’s not the most accessible track, but musically it sets the tone nicely for the album as the energetic horns and smooth complementary keys give the track a nice swing. “Got Your Back” is a mixed bag that shows some of the drawbacks of having a band backing emcees. Traditionally, an emcee rules the track with the music playing background, but with a live band it’s inevitable that the instrumentalists get a little more shine than usual. In this case, the horns (especially on the hook) seem to be at odds with the emcees, making parts of the song difficult to listen to. “Culture Industry” gets things back on track as the music features a mix of funky trumpet riffs and jazzy saxophone notes. Emcees Noesis and Tjader use the track to comment on the current state of hip-hop, mainly how commercial it has become. It’s not your usual underground rant at how commercial hip-hop has taken over, instead it’s an attack at the way hip-hop has become a way to advertise other products. The song is one of the few times an underground act complaining about commercial rap hasn’t led to me hitting the forward button. Unfortunately, Philadelphia Slick can’t resist the temptation of straight up whining on a few songs. “R and B Stole The Show” is the worst example as the emcees try to present some sort of message about the watered down state of hip-hop. I don’t quite understand what the point is as on one hand they praise some classic R&B singers at the beginning, but then blame R&B for the way radio is right now.

If you can manage to get over the typical underground rap rants, or if you enjoy those type of songs, the rest of the album is pretty dope. The only complaint may be that Noesis and Tjader can be a bit too abstract on the mic sometimes. It doesn’t happen on every track, but some of their verses end up being the type you have to rewind, not because the lines were so dope but because you’re trying to decipher what they were trying to get across. Once again, there are plenty of fans who enjoy more complex and abstract lyricism so this isn’t necessarily a bad thing. I personally prefer tracks like “Fluent Advice” and “Gun Em Down” where the lyrics are clearer and more focused, but I can see plenty of fans digging the more lyrical tracks.

Overall, “Culture Industry” is a satisfying and surprising album. Emcees Noesis and Mike Tjader will never hold a candle to Black Thought’s verbal assaults, but they are definitely above average emcees. If you love some complex and abstract lyricism in your music, you’ll definitely appreciate Philadelphia Slick even more. The musical arrangements, handled by keyboardist Zach Reilly, range from great to just average â€“ with most being very pleasing. You can clearly tell that all the musicians involved are talented and the composer definitely has a knack for creating catchy and funky arrangements. While initially you’ll be tempted to compare Philadelphia Slick to The Roots, if you get over the “band” aspect of the group and judge them on their own merits you’ll see that “Culture Industry” is a refreshing album that shows promise for those who enjoy live music with an abstract twist to it.