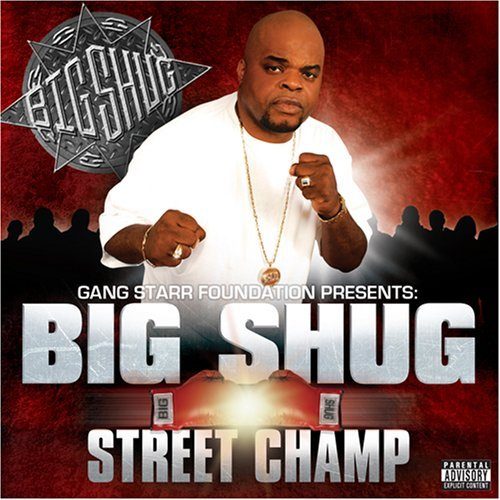 I have to admit I was excited upon receiving Big Shug’s latest album. Like most hardcore Gangstarr fans, I usually take a chance on anything endorsed by either group member. Like most hardcore fans, I’ve also been burned ten times out of ten since outside of Gangstarr albums, the Gangstarr foundation has been severely under whelming. Big Shug seemed like a good candidate for breaking the mold since he was part of “The Militia” which was Gangstarr at its best. Of course, had I done my research and checked out Flash’s review of Big Shug’s “Who’s Hard?” I would have tempered my expectations accordingly. After listening to “Who’s Hard?” Flash came to the conclusion that Shug wasn’t a very good rapper but had some pretty good beats due to his connections. On “Street Champ” the same holds true as Shug is a below average emcee rapping over above average beats.

Despite being a wack emcee, Big Shug has the confidence of a champion – which may be where he derived the name of his album. The intro features a minute of Shug describing his album as if it was the best album – ever. He even tells you not to buy his shit if you don’t like it. The title track kicks in and Shug describes his life- a world so full of violence and braggadocio it would make Don Corleone envious. Coincidentally it is also one of the strongest cuts on a lackluster album as Shug can be decent when he wants to. “Hood With That” is a call and response track that has to be directly inspired by Big Pun’s “Nigga Shit.” While neither song is original, Pun brought a better beat and some comedy to make his song worth listening. “Play It” sees the first appearance by DJ Premier as Shug pleads for a more even playing field when it comes to radio. Having Primo produce your cut makes for a good argument in favor of radio play and Big Shug surprises with a relatively original cut. “Warpath” finds Shug reverting to his street persona and is noteworthy if only for an appearance by up-and-comer Termanology. “Legbreakers” features another guest appearance, this time by Sean Price and Twin, but neither comes particularly dope as they describe their status as neighborhood thugs.

The album drags on for track after track of more of the same. Average to dope beats with Shug dropping the same tired street cliches. The fact that there are relatively little guest appearances hurts Shug as he has to carry 18 tracks by himself, not an easy task even for more talented emcees. Every now and then Shug drops us a gem as he does on the soulful and inspiring “Lost” where he even does some singing:

“Wake up in the morning, time to go to work
Gotta find that motivation, for my potential patience
I work overtime just to pay my bills
Although my hands are really aching, my legs are really aching
Is it worth it? I ask myself
But my children keep me going, It’s fun to watch them growing
Misery loves company
So I try to avoid it
But some days… I feel lost”

I wouldn’t advise Big Shug to take up singing full time, but he’d be better if he put as much thought into his other songs as he did with “Lost.”

Big Shug still has a long way before he can rightfully claim to be a dope emcee, but truthfully I think the man can get there one day. Songs like “Lost,” “Play It,” and “Street Champ” show that the man is capable of making gems. If he could produce an album of similar tracks he’d definitely be worth checking for. For now, he’s worth checking for the production and occasional hot track, but may be best enjoyed on iTunes through individual track purchases.