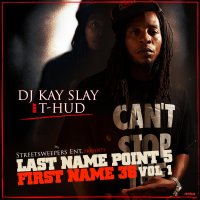 T-Hud is the stage name of Troy Hudson, whose day job is playing for the Minnesota Timberwolves. Like Shaq and Ron Artest, he is also an aspiring rapper, and the founder/CEO of Nutty Boyz Entertainment Group. This disc is a mixtape featuring songs on his upcoming “Undrafted” debut album.

This being a mixtape, none of the production work or songwriting is credited, and I’m not sure how many of the beats are original and whether any were jacked from other artists. Whoever the producers are, they did a damn good job. “Bulletproof” and “Back It Up” are sparse, trunk-rattling crunk ala Lil Jon and David Banner; “How I Like ‘Em” is sleazy, strip-club funk. “On That”, with its congo drum and synth pulse, has a sinister beauty that is on par with the Neptunes’ work on “Hell Hath No Fury.” Another standout track is “Whatever”, which chops up several second-long soul samples to create a bizarre sound collage. The only real disappointments production-wise are the incredibly cheesy “Go Gettas”, which has a sample that could have come from an inspirational after-school special from the 1980s, and the lackluster “White 550s”, which is also the first single. The rest of the disc is solid, South-leaning commercial hip-hop.

As a rapper, T-Hud isn’t terrible. He isn’t great, and I definitely wasn’t blown away by his flow, but he holds is own and doesn’t embarrass himself or the listener. Lyrically, he is lacking, and that’s where it becomes obvious that he is an outsider to the game trying to find a way in. He thankfully avoids making a lot of basketball metaphors, but he ends up being so desperate to prove that he is still street that it becomes ridiculous. This album is one big front, with T-Hud trying his best to prove to the world that underneath his baller persona, he is actually a thug. On “Back It Up” he raps:

“550 through the city
22s in the wintertime
Hundreds in my pocket
Ben Franklin is a friend of mine
Mossberg in the trunk
Lap is a tech-9
Think I’m lying?
Dummies dying
Think I’m lying?
Mommies crying
I’m rich, bitch, the hummer’s mine
Sitting on 29s
Candy paint dripping
Inside peanut butter
If you think I’m slipping
Inside still gutter
The league is new, dude
Don’t let it fool you
I’m from the hood motherfucker
I got twos too”

T-Hud is a ball player. He makes millions of dollars a year. So why is he fronting like he’s a 19-year-old gangsta fresh out of the hood? Does he really ride around with a shotgun in his trunk looking to shoot anyone who crosses him? I understand the necessity in hip-hop for street cred, but that doesn’t mean bragging about stuff you clearly are not involved in, and declaring “I’ll gun ya and then your body will be shaking from the trauma.” T-Hud is an NBA player, not a hustler, and he should stop acting like he’s a thug.

Given how uptight the NBA is about how its players present themselves, I was surprised to hear T-Hud dropping lines like:

It makes for a catchy song, but he is just begging to get pulled over or have a surprise drug test. On other tracks he brags about flipping keys, cooking crack, and being a gangsta. He is obviously taking inspiration from reformed drug dealers like Biggie and Jay-Z, whom he compares himself to. What T-Hud misses, along with a lot of rappers today, is that what makes artists like Biggie, T.I., and the Clipse so good isn’t that they rap about selling crack and being involved in illegal business. Those guys have charisma, flow, and talent, and are able to flip language around to make even the most mundane recounting of a drug deal seem like something clever and innovative. It’s not their subject matter, it’s the way they rap about their subject matter. In a recent interview, Talib Kweli said that he blamed the recent drop in quality hip-hop releases on the hustler mentality, where all these young rappers think that you just need to spit a few lines about cooking crack and capping fools and you have an album, losing the lyricism and artistry of hip-hop. T-Hud falls into this trap, and his record suffers because of it.

T-Hud gets some assistance from Freeway, David Banner, and the Three 6 Mafia, who are all featured on different tracks. They drop a few decent bars which add some credibility to the project, and their expert intervention is welcome. I wish T-Hud had made a record solely devoted to flossing and partying, something along the lines of Paul Wall’s “The People’s Champ.” As it is, this mixtape makes for decent background music, so long as you don’t listen to the words.