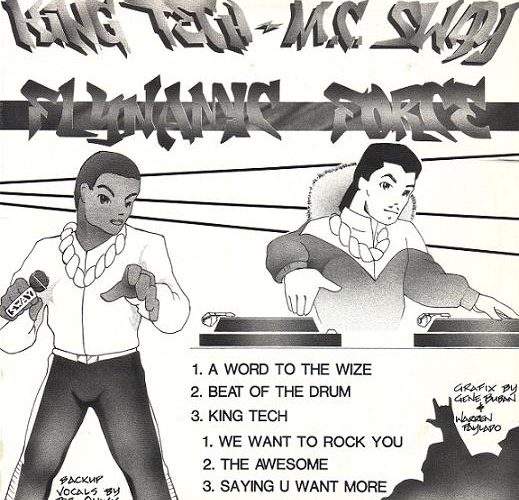 When it comes to representing hip-hop, it is hard to attain a higher profile than John ‘Sway’ Calloway. Undoubtedly his most important vehicle to represent hip-hop was and is _The Wake Up Show_. Since it first went on the air in the Bay Area as _The King Tech Wake Up Show_ in 1991, Sway and King Tech, later assisted by DJ Revolution and Carmelita, have turned the format into the world’s most famous hip-hop radio show. But it is his gig as an MTV reporter and presenter that made Sway one of the most recognized hip-hop figures in the media. He has been with the network since 2000, and in 2006 apparently even ascended to an executive position, securing the privilege to produce further programming together with partner Rod ‘King Tech’ Sepand.

The duo’s starting point reaches even further back than this 6-track EP on All City Records from 1988. As evidenced by the last track, “King Tech,” a recording they marked as ‘Unreleased – Made Dec 86.’ Produced by DJ EFX, “King Tech” is a DJ track typical of its time. Sway goes from old school braggadocio (“Fortune and fame (…) a billion dames / big crowds, autographs, and news reporters / tryin’ to catch our talent on a tape recorder”) to mimicking the verbose style of T La Rock with “Turntable connoisseur made for you to delight / performin’ orchestral manoeuvres designed to excite / crossfader cultivator and DJ agitator / wide surprise of your eyes, he’s preordained to be greater.” The same tries to live up to the praise by cutting up raps by the likes of Treacherous 3 and L.L. Cool J, at one point even cueing up a classical piano, inspiring Sway’s flawed comparison “Pavarotti isn’t greater than my beat creator / he knew the violin but could he work the crossfader?” (Exactly, what do classical musicians know about hip-hop.) The song’s most engaging lyrical moment is when Sway says of his DJ, “Tucked away in his room you never see him for days / takin’ skillful steps through a musical maze / he’s like a madman, insane, you think the beat’s bezerk / but if you listen to him closely, he plays it reverse.”

As early as 1986, Sway referred to the duo as Flynamic Force, but with their individual names appearing on both the vinyl and the tape edition of this EP, they’ve virtually been Sway & King Tech for the entirety of their career. 1988 still saw them operating under the influence of electro and New York rap. They didn’t deem it necessary to specify that they’re West Coast artists. Regional branding wasn’t as nearly as important in those times, so rather than acting as Bay Area representatives, the duo was much more concerned with coming across as believable b-boys.

DJ King Tech, who acts as producer for most of the tracks, is Flynamic Force’s recurring topic, with ample room given to Sway to boost his own profile. The songs they recorded after “King Tech” are musically more complex while lyrically Sway finds a less complicated language, to the point where his lyricism is almost too simple. Yet it should not be forgotten that hip-hop in those days had a strong responsibility to get you hype. Sway may caution, “Just listen, or you’ll be missin’ quality lyrics,” but he doesn’t lose sight of the record’s purpose: “This is a hip-hop beat, so dance.” They couldn’t put it more plain than with “We Want to Rock You,” opening with West Street Mob’s (Pleasure-interpolating) invitation to dance. It takes in-depth knowledge of ’80s electro and hip-hop to guess all the samples that went into this one and the rest of the tracks, as “Flynamic Force” reflects a DJ’s approach to hip-hop. King Tech created dynamic tracks with breakdowns and bridges, alternatively condensed and stretched segments, running the gamut of cowbells, talkboxes, punchy electro bleeps, and percussive thunder. A sampler has likely been used, but the structure is that of DJ set.

“Flynamic Force” teaches you the meaning of ‘doping it up.’ Not that there’s an exact definition for such a thing, but it gives you an idea of the importance of the drum for ’80s hip-hop tracks. Although, the first thing you hear on “The Beat of the Drum (4 Minutes of Death)” is a hard rock guitar chord. Then the kinetic beat drops, infused with a funky keyboard current and vocals that repeat, just barely audibly, “Ugh, so funky.” As the drums get busy, the epic guitar makes brief but continued comebacks, overlayering the track with an ominous tone. The MC’s machine gun delivery interacts with the complex drum programming, making this a typical fast rap track with the added benefit of featuring one of the most creative uses of rock guitars of the time. “A Word to the Wize,” introduced by another famous dance vocal, this time from “Last Night a DJ Saved My Life,” adds elements as different as the ringing guitar from The Jackson 5’s “It’s Great to Be Here” (an “Ultimate Breaks & Beats” inclusion) and a darkly vibrating electro bassline to the precisely ticking drums.

The remaining two tracks are co-produced by none other than Dan the Automator (on the cassette charmingly credited as ‘Automater’). “The Awesome” is the record’s hypest cut, early on culminating in a stirring collage of vocal samples. The bass drops deep, electro bass stabs push and shove the track onward, while lashing drums keep the tempo steady. “Saying U Want More (Break it on Down)” is divided in two, starting out as a pounding instrumental consisting of James Brown grunts, “I wanna rock” yells from a rock band followed by Rob Base’s “I wanna rock right now,” rock guitar and manipulated “Scorpio” samples. Then the track slows down for part two, which features Sway rapping aggressively over syrupy keyboard strings, among other things referencing what seems to be an R&B project All City was involved in, New Kraze.

At one point Sway says, “Your names will fade away, but Sway’s will stay.” While he was right about that, he probably didn’t think that he would owe the lasting power of his name to a position at the other end of the mic. On “The Awesome” he boasts, “Each recital, title it incredible ability / (…) / rockin’ with agility, change it, still it’s me.” In that respect as well he would be proven right, because even if you only know Sway as friend to the stars, you will instantly recognize his ’88 rapping, as his characteristic voice is virtually the same. Only the obstinate delivery and the forced rhetoric betray the age of his performance. This “stampede called Sway” would have ran its course soon.

Speaking of lyrics, there’s the occasional line that’s on point (“Get on down to the sounds that Tech made / phony MC’s on the rise – checkmate”), there’s the usual internal rhyming (“You’re at a stand-still, you need a refill / still I appeal to reveal and instill / a Flynamic concept, positive complex / in-depth concept when I project / the b-boy intellect that I manifest / to suckers that I address, can you stand the test?”), there’s even a bit of profanity in conjunction with a death threat (“Ashes to ashes and dust to dust / are the consequences suffered when you fuck with us”). But generally Sway’s lyricism is so up in the air that you’re thankful when the rapper at least establishes a timeline to ground his recitals in reality: “Started off as a listener tuning into the box / then turned off my radio because it did not rock / I created my own jam with the kick of a gun / I’m the rebel called Sway and I just begun.” But moreso than about Sway, this EP is about Flynamic Force and their teamwork: “We’re the dynamic duo, the masters of music / give us a funky beat and we’ll use it.”

Sway and Tech went on to release a couple of twelve inches that eventually lead to their 1991 major album “Concrete Jungle.” Their label All City Records operated at least until 1992 when it released “Bust Your Rhymes” b/w “Unsolved Mysterme” featuring Motion Man and Mysterme, and was possibly also the driving force behind the only full-length by Oakland duo The BUMS, 1995’s “Lyfe ‘n’ Tyme.” But obviously the “two fly brothers” had found their calling in hosting an influential radio show that would give many famous ’90s rap artists their first big break. They have used their power wisely, rarely ever compromised, championed the art of freestyling and helped stage legendary battles such as Hobo Junction vs. Hiero. _The Wake Up Show_ represents the idea of paying your dues so essential to hip-hop, and the “Flynamic Force” EP is how Sway and Tech paid theirs.