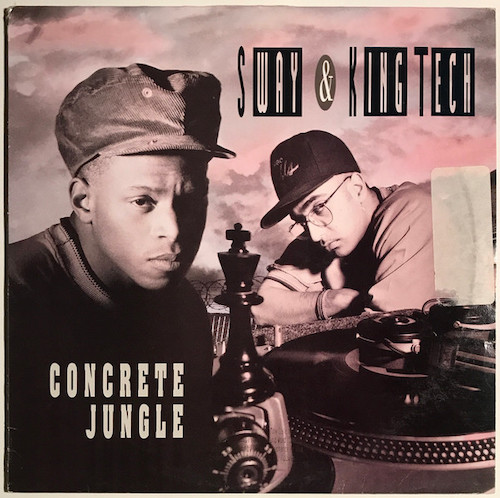 Sway Calloway has had an amazing career. After getting his start in the 1980’s as one half of the Flynamic Force alongside deejay King Tech, the two parlayed local Bay Area success into a deal with the Warner Bros. imprint Giant Records. The 1991 release of “Concrete Jungle” on the label in turn garnered them a deal to host a radio show locally on KMEL FM. The Wake Up Show would turn out to be even bigger than their career as rapper and DJ, as their show quickly became THE hub for aspiring rappers to flock to California and appear on the show. The freestyles were legendary, the battles were epic, and the format inspired a compilation album to capitalize on their popularity. If this was the end of Sway’s legacy he’d already be a made man, but he parlayed THIS success into becoming a regular on-air correspondent for MTV. By the sheer force of his personality, charisma and work ethic Sway has moved from one media format to another and found success every step of the way.

My introduction to Sway came from the music video for “Follow 4 Now,” the first single off “Concrete Jungle.” As much as I enjoyed the song’s boisterous raps from Sway, the samples of Chuck D and Rakim found within, and Tech showing correct techniques on Technics, the song seemed like a one-off. In fact when the album is brought up Sway & Tech seem more interested in how many units the single moved, which doesn’t shake my impression that the album was an afterthought. I never saw a second video or heard a second single and until I graduated high school and started tape trading in college did I realize Sway & Tech were still around. It took some effort to dig up their album and I only did it to see what I had missed before The Wake Up Show became internationally renowned.

It was a bit strange to me then and it still is now. I enjoy Sway’s delivery on the mic, but I’m often left thinking he sounds like the Cali version of Kool Moe Dee. That’s a mixed bag comparison — it means his vocal tone can be incredibly forceful, but it also means his breath control can be remarkably stiff. On “Rock Steady” he seems to be literally trying to recapture the b-boy era of the Rock Steady Crew, with a song that has a heavy emphasis on the drum break and a rap that’s secondary to getting on the dance floor. That’s a recurring theme for the CD that can immediately be seen in the following song “Let Me See You Move,” a track closer to house music than rap.

In a vacuum I can appreciate the Freedom Williams style rap and uptempo dance vibes, but as someone who was not a dance music aficionado back then I didn’t understand it. I naively presumed “Follow 4 Now” was the song to introduce the group to the world, and that the rest of the album would be hardcore hip-hop songs. Even the songs where they referenced their history as the Flynamic Force seemed odd. “Future Source” has some of the most stilted delivery Sway can muster, and even though Sway decries the “rip off” artists of rap the whole song sounds like a low rent Eric B. & Rakim.

The only song on the album that left a lasting impression on me other than the lead single was “Time 4 Peace.” The song rides an Isaac Hayes sample that would almost guarantee it to be a winner no matter what they did, but Sway’s sincere request that we fix “the state of the world that we live in” resonates to the present day. Unfortunately in the three decades that followed many of the problems he brings up — racism, poverty and discrimination — either got worse or manifested themselves in ways that he couldn’t have foreseen while recording it. That doesn’t mean the effort was in vain, but it does mean the battle for a better tomorrow never ends.

The album ends on a high note with “Same Old Thang” even if the title is somewhat ironic. I think that’s the curse of “Concrete Jungle” in a nutshell. Instead of offering anything new to the rap world, Sway and Tech offered a lot of familiar refrains and styles from the artists who succeeded before them. I can’t say that Sway was swagger jacking or that Tech was musically lacking, but I can also see why this album was entirely unessential.

I started this review by praising everything that Sway has accomplished and I stand by that regardless of this album’s importance. If you’re a fan of his work as a radio show host or TV personality, “Concrete Jungle” lays the foundation for everything that would come, even if it was hard to see it through the smog at the time. One good single was all Sway needed to make his next move in the entertainment world, and with “Follow 4 Now” he launched himself to bigger success than he’d ever find as a rapper.