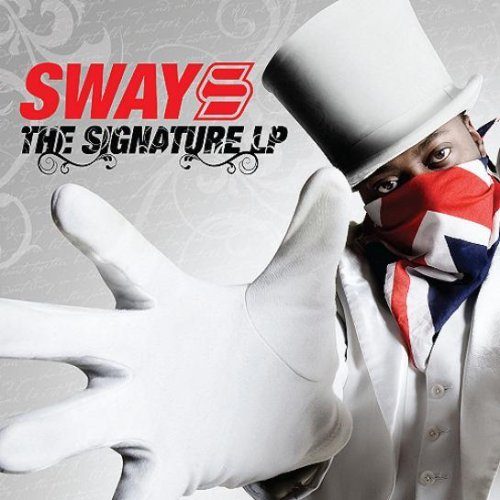 After a LONG wait – almost three whole years, a Lil Wayne-shaped eon in hip hop terms – Sway finally returns with his sophomore album “The Signature LP.” Whilst he has been releasing tons of free songs through the net, as well as mixtapes, many have argued that a sizeable amount of momentum has been lost since the release of his debut “This Is My Demo” – an album that Matt Jost pretty much nailed in his sterling review back in the mid-Noughties. But he hasn’t rested on his laurels, no no. In that time, he hooked up with a whole bunch of famous folk – the most crucial being the serial monogamist Akon. After much confusion, Sway has now allegedly signed a multi-album deal with Akon’s “Kon Live” label (Derek, I’d Google the fuck out of that fake-sounding “label” if I were you) – but retains his early Jigga-style right to release his albums on his own Dcypha Productions in the UK and Europe. Got it?

Firstly, and most disappointingly, there is no Charlie Boy, his hilarious alter ego. Damn, that’s cold… Poor MC CB from Ghana, he who damn near stole the show on his debut. You’d assume that means we’re in for a more serious album – and you’d be right, dear Reader. “Signature” is a sprawling sixteen-track opus, combining hip hop with live orchestration, grime, soul, R&B, quick wit and emotion. In fact, the emotional side of the album almost proves overwhelming for Sway – understandably, since he has lost many loved ones over the past two years. On heartbreaking tracks like “Pray 4 Kaya” and “Letters to Heaven,” the MC is overcome with emotion, and it may prove a shock to the system for those that only know Sway for his light-hearted side. The Akon connection delayed the release of the album for a few weeks, resulting in another shock song, the late-addition collabo between the two, “Silver & Gold,” but more of that later.

The album kicks off in style with the monstrous “Fit 4 a King” – imagine the opening title track from “This Is My Demo,” but with a 22-piece live orchestra and a “We Will Rock You” drum-clap. Lyrically, Sway is on fire (take that as read for the WHOLE album) and his tongue-twisting raps will dazzle any unfamiliar ears. Next up is one of the stand-out tracks, “Say It Twice” – where he literally repeats himself line after line (albeit in a clever way) in order to cater for the American market that can’t understand his accent, pure tongue-in-cheek. It is a stunningly executed song, not to mention a brilliant idea, and helps to provide a knockout one-two opening sequence. We move into the “Obvious Commercial Singles” section of the album next – “Saturday Night Hustle” featuring Lemar. It samples the classic “Saturday Love” from Cherelle featuring Alexander O’Neal – somewhat unoriginally and obviously, though. Sure, it will worm its way into your brain, but, notably, it hasn’t made much of a dent in the UK – whilst Dizzee Rascal’s bizarrely charming but much riskier “Dance Wiv Me” topped the charts. Next up, the aforementioned collabo with Akon, “Silver & Gold” – a strip-club anthem. Seriously, you read that correctly. Coming from Mr “no guns, drugs or bitches” Sway, it sounds disingenuous and totally out of place – the audio equivalent of that moment you first realised your parents used to have sex.

The first street single, “F Ur X” featuring Stush, is faultless in every way, and is followed up by another excellent narrative, the hilarious “Jason Waste.” The solid-enough “Look After My Girl,” an R&B crossover number that improves on subsequent listens, precedes “Pray 4 Kaya.” Whilst I can’t criticise this heartfelt track, the sequencing leaves a lot to be desired, since the momentum of the album sharply loses altitude – and surely the nature of the song meant placement near the end of the LP. It also draws some heat out of the socially-conscious “Walk Away” – addressing, to an extent, the recent spate of knife and gun crime in the UK. This is a shame, since – after shaking off any The-Dream connotations – it is an immensely strong number that gradually grows into an anthem of sorts. The sequel to the first albums’ “Download” is, unsurprisingly, “Upload” – an initially whiny rant, but actually quite a clever commentary on the music industry at present (and how you have to be a “brand” to make any money). Here the album switches to autopilot, with the shit-talking Chops-produced “Stereo” kicking off a somewhat predictable closing sequence. However, the two tracks at the end (which are bonuses in some countries) are surprisingly good – the Napa-esque “Taxi,” and the grower “My Kind of Girl,” both definite improvements on the first albums’ bonus numbers.

I must admit to initial disappointment after my primary listen – but that soon dissipated, as I came to realise just how STRONG “The Signature LP” is. It flows together well, minus the clever skits of his debut, and balances commercial songs with street anthems, hip hop with grime and R&B, dry wit with emotion. However, perhaps it is unfortunate that I just spent the previous week listening to T.I.’s most recent work, “Paper Trail.” Whilst I’m in no doubt – and I cannot emphasise this strongly enough – that Sway is a superior MC to T.I. in a thousand different ways, something is lacking here. Sure, the Brit is much more impressive on “The Signature LP” and has clearly stepped his game up, but T.I. is able to coast through an album of average songs before suddenly, like a hip hop version of Fernando Torres, flicking the turbo switch and knocking out a 10 out of 10 universal banger (see “No Matter What” or “Dead and Gone”). Whilst there are some stunning songs on here, like “F Ur X” and “Say It Twice,” they tend to cater to niche markets (see “Jason Waste”). The attempts to crossover sound pretty unimpressive in comparison to what Sway cooks up himself (I’m pointing at you, “Silver & Gold”), and the key word to take from this conclusion is “universal.” That is something that Sway hasn’t conquered on his sophomore, and whilst it may appear harsh to criticise such a clearly talented artist who is only releasing his second (not to mention strong) LP, he has taken almost three years to make “Signature” and to not bring at least one undoubted universal banger is, to put it simply, the reason why this album probably won’t sell as much as it should (NB – I could be totally wrong and “Silver & Gold” with a hot video could top the Billboards, WTF do I know?). This album is thoroughly recommendable (hell, I’d buy it, recession or not), and the total marks below are a high 8.0. Plus if you’re unfamiliar with Sway, you will be extremely impressed, no doubt – it just could’ve done with a couple of more identifiable peaks to help soar through the clouds.