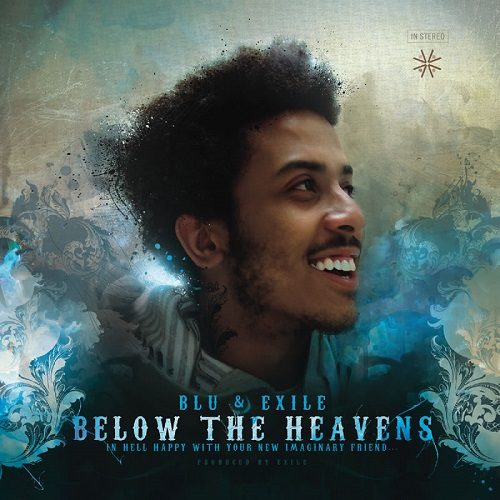 Blu & Exile :: Below the Heavens

“Fuck a critic, nigga this is my life!”

It’s with a heavy sense of irony that I write this review. Blu (the rapping half of this group) doesn’t need or want my validation of this album. And he has a point. “Below the Heavens” is nothing if not an incredibly honest look into Blu’s history and state of mind. Who am I, or anybody else to judge that? I don’t know him, can I honestly say how true or honest this album is? More to the point, how can I know the hundreds (or tens) of people who read this review will feel when confronted with “Below the Heavens”?

Nonetheless, I feel compelled to write this review. Not because anybody asked me to, or because I want to get back at Blu for the above statement. I feel compelled to write this review for the same reason I write it in first person: “Below the Heavens” is one of the most personal and honest albums I’ve ever had the pleasure to hear. Delivered completely without any sense of gloss or pretense, Blu’s confessional raps leave no distance between himself and the listener. Whether dealing with his own definition of heaven, or coming to terms with unexpected fatherhood, Blu deals with topics that anybody can relate to, even if they haven’t personally experienced it. “Show Me the Good Life,” which functions as something of a spiritual awakening, is the perfect example of how revealing he is:

“I got a call from my girl last week
She telling me about that time of the month, and how it may not come
Dropped the phone right before she said we might have a son
And I started asking God “How come?”
I got dreams I ain’t reached yet
Aim’s I ain’t meet yet
When it comes to being a man, shit, I’m barely getting my feet wet
Trying to hit reset, knee deep in debt
Trying to figure out how to feed a mouth that ain’t got teeth yet
[…]
There’s so much I can show you
Without rolling through Beverly Hills
Without money, cars, hoes, or even ecstasy pills
[…]
Fuck jewels, I think my soul glows bright enough
And fuck whips, I learn more when I ride the bus
And fuck gold, it’s bad enough we fight for bucks
And fuck hoes, ’cause in the end, I need a wife to love
Plus heaven is the life for us
So God… (show me the good life)”

But Blu himself is only half of the equation here. Exile, the album’s producer, is a perfect compliment. His easygoing, tranquil projects are a background that Blu feels superbly comfortable on. No matter the subject or what he’s saying, Blu is always at ease here, never over-extending himself. Exile’s productions are extremely consistent; there’s never a weak moment in the album’s production, or one that separates itself from the rest.

Unfortunately, this also creates the album’s biggest fault: the production rarely stands out. Yes, it allows Blu to be at center stage, never eclipsed. But long before the album is over, the beats seem to blend into each other, not varying enough in tempo or sound. Other than the heavy, intense grooves of “My World Is…” Exile falls into a slow, easy pattern here, and it creates a stalling effect on an otherwise excellent CD.

At the same time, this weakness puts the focus squarely on the album’s greatest strength: Blu is an extraordinary rapper. Beneath the personal nature of this album, Blu is also an extremely good lyricist, both technically sound and very clever in his turns of phrase. He easy fits multi-syllable rhymes in every line, and most verses contain some play on words. And while he’s generally at calmly contemplative throughout “Below the Heavens,” he’s far from soft, as the barrage against generic rappers of “Soul Rising” [/”Simply Amazin'”] shows clearly:

“Ya’ll need a million dollar budget and some punchlines? Here
All your boy need is one right ear
And I can prolly change the world, fuck you so-so rappers
Wearing diamonds and pearls, like you homo rappers
Ya’ll some go-go girls, with your go-go gadgets
Exposing what you’re holding like your soul don’t matter
I got a go-go get it mentality, so battle me? Please
I just throw out some cheese, and ya’ll will go-go at it
Got you pulling out your four-four magnum
While I stagger motherfuckers with thoughts, I got my mojo mastered”

Most of the time, however, Blu isn’t concerned with anybody else; he’s fine in his own world. And that’s even better, because Blu’s got a huge scope of things to rhyme about it. Most rappers claim that they’re “real,” but Blu is one of the few who captures the whole reality of his situation, rather than writing about only its extremes. He’s serious enough to impart a sense of importance to everything he writes, but human enough to deal with problems like not having a car, trying to pick up women when he has no money, or trying to hold down two jobs to support his family. Through all, “Below the Heavens” focuses on seeing the light at the end of the tunnel; even the title of the album is a lighter reference to dwelling in hell. As he says, “You motherfuckers struggle, we just dancing in the rain.”

Highlights of the album are too numerous to name, or quote, but nearly every song is a small masterpiece within itself. While the production does get slightly monotonous over the course of an album, each of the songs individually is exceptionally well-made from all angles. In the end, the statement at the beginning of this review is wrong. This isn’t his life. This is life, period. And any fan of hip hop, literature, or music in general would be well served to have “Below the Heavens” in their collection.