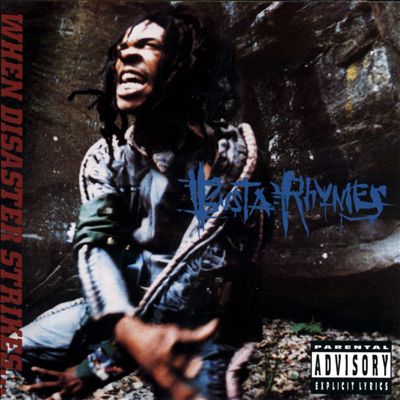 In 1998, as an impressionable Sophomore in High School, I ventured out to The Smoking Grooves tour concert that featured the likes of a pre-“Behind the Front” Black Eyed Peas, Gangstarr, Cypress Hill, Public Enemy, Mya, ODB, Wyclef Jean and perhaps, most importantly, an energized Busta Rhymes rockin’ the once trademark dreads. You bet your ass it was a phenomenal show. As marijuana smoke permeated the amphitheatre air in Columbus, Ohio, my friends and I witnessed some special performances, but I never had seen someone get a crowd amped so early in the night as Busta did showcasing tracks from his seminal release “When Disaster Strikes…” that dropped the previous year. I had already burned a whole through the disc playing it so much–it was nice to see others realizing how goddamn hot this album is. Am I biased? Probably, but that does not lessen the impact of a release that sounds as good as it did then a decade later. In retrospect, this is a highly underrated album because people seem to stray from it in conversations about greatness nowadays.

Busta hit the scene harder than any other emcee with an amped up verse on Tribe Called Quest’s masterpiece posse cut, “The Scenario”. “Rarrr Rarr, like a dungeon dragon!” a young Busta spit with an intensity and raw energy so powerful that it is still is reflected on as one of the greatest single verses of all-time. The Leaders of the New School dropped two solid old-school LP’s in 1991 and 1993, before, quite likely, Busta’s ego (and ability) needed room for itself to grow. The aptly titled debut album “The Coming” finally got the emcee on his own two feet. It is regarded as one of the finest debut albums of all-time behind the obvious choices like Jay-Z’s (Reasonable Doubt) and Nas’ (Illmatic). Still, in many ways “When Disaster Strikes…” expounds on what Busta had laid the foundation for with the big hit single “Woo-Hah! Got You All In Check” that rode the MTV airwaves for ages and arguably he delivers a stronger effort yet with this masterful LP.

Busta Rhymes’ paranoia about the apocalypse is laughable at this point, despite threats of nuclear war looming even today, because he only gave himself a two-year window by stating that the disaster would strike in the year 2000. This was before the Y2K theory became a popular fear. Nonetheless, this is one of the few things that have aged on this release. The bass still kicks and the lyrics still fit the bill.

Also, Busta sells his ridiculous beliefs by insuring that the disc has a certain feeling of cohesiveness as one track fades into another effortlessly. The dramatic opening tracks, “The Whole World Lookin’ At Me”, “Survival Hungry” and “When Distaster Strikes” piece together like a wonderful musical puzzle. The latter offers just one of the many sets of bars that showcase the star’s lyrical dexterity:

“Yo.. now check it out, yo
I keeps flows so ridiculous
Rhyme flow taste good like a handful of cherry licorice
Practice your rhyme or be the local practitionist
Well you can try bein’ a doctor or bein’ a local obstetricianist
See, you can be somethin
Quit tryin to work so fuckin hard to-wards nothin
This rhyme shit was never designed for every swollen muffin
Yo, I’m sayin..
Why y’all niggaz think that y’all could really see my Squad?
And if we hit you hard that’s when you feel the power of the God”

These brooding tracks set the mood early, but Busta does a great job of bunching like tracks together and changing the feeling of the album without sacrificing it in any detrimental way.

“So Hardcore” signifies in the change in direction. The tambourine backed cut is a groovy and simple cut that is there purely to get the head nodding with strangely fitting lines like, “My family tight more than Connect Four/ I come through and create the masterpieces/ Bend your mind with rhyme telekenesis!” It’s just another self-promoting track but Busta makes it entertaining with his weird references and often surprising lyrical abilities. “Get High Tonight” , the weed smoking anthem that follows, is another feel good sing-a-long track that features a deep bass line that remains sporadic enough not to overshadow Busta’s excellently raspy rap voice.

“Rhymes Galore” acts as “Woo-Hah!!” Pt. 2 with a pulsating beat that bridges into the repetitive and simple chorus. Basically, if you were a fan of the his first big hit, you’ll be a fan of this one too as it steals the same formula.

Things hit a little too close to home with the skit that connects the two parts of “The Things We Be Doin’ For Money” as it is Busta assaulting someone. If all of the recent charges against Busta are any indication, then he may have just been running a tape recorder in his pocket. Thankfully, the tracks are both winners, with the second story telling track being the better of the two. Original Flipmode member Rampage trades lines with Rhymes as the narrative explains the problems with hustling and the sometimes self-destructing black community.

Some of the finer tracks come later in the album and ironically they are laid back joints. The Bad Boys Records ridden “Body Rock” is a fun party track that features Puff Daddy, Mase and Craig Mack when they were tolerable–ahh…the good ol’ days. The soulful “One” featuring the always reliable Erykah Badu has a humming background that finds Busta getting in touch with his peaceful, loving side, which is a breath of fresh air that adds the perfect amount of variety.

Of course, you cannot talk about this LP without mentioning the classic singles that originated here. Whether you prefer the tribal drum pattern of “Put Your Hands Where My Eyes Could See” or the near-perfect “Dangerous”, one thing is for certain; they are some of the most entertaining music videos to bless us in the past decade and to think that they were back to back singles directed by Hype Williams. The DJ can put either of these joints on without hesitation to get the house moving. And that is what Busta continues to do with great success for many years and albums thereafter.

With the possible exception of “It Ain’t Safe No More” Busta has delivered with his follow-up releases to this classic. “E.L.E.” was more of the same with the symphony-inspired “Gimme Some Mo'”. “Break Ya Neck” was a stunning single off of “Genesis”, a sonically pounding album. The oft-forgotten “Anarchy” had many choice cuts like “Bladow!” and “Street Shit” to blaze through your car speakers. Despite whatever reservations you may have in picking up a Busta CD, you are assuredly going to find at least something you like , if not, all of it. Clearly, Busta has had a great deal of influence on many charismatic rappers. His ideas have been adopted time and time again (take Chamillionaire’s ‘Hip Hop Police’ video for instance) because he is a great innovator in rap music and one of the most purely talented individuals to ever grab a mic. Don’t y’all forget it.

Busta has been traded around like a top of the line free agent since this release, calling other big time labels like J Records and Aftermath (currently) his home. It does not matter where he ends up though because he sticks to his true formula and drops very entertaining albums that feature the best production credits possible (DJ Scratch, Just Blaze, Pharrell, Dre). There are haters that think that he is not raw like he used to be, but they must not have listened to the “Big Bang”, a sadly overlooked, yet rock solid release in 2006. With the direction rap music is taking in terms of sales, it is unlikely that this once sure-fire platinum artist will ever reach those numbers again, but as long as he keeps doing his thing and remembering the foundation he built with “When Distaster Strikes…” he will have at least one very enthused fan.