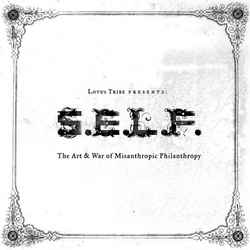 S.E.L.F. of Lotus Tribe :: The Art & War of Misanthropic Philanthropy

The blame game is one that is constantly played around the world. Nothing irks a rap fan more than when politicians or lobby groups play the blame game and try to imply that hip-hop is at fault for the latest immoral behavior. Of course, while we hate this blame game we are constantly playing it within our own inner circle. Currently people love to blame the style/region that’s popular at the moment for the death of hip-hop. Atlanta and Houston have to be at fault for the decline in popularity of New York rappers or conscious rap. The focus on material things is at fault for the lack of substantive music on the radio. The list of complaints goes on in on. The whole time people ignore all the good things that are happening. They ignore the fact that Common Sense was overlooked and ignored during the so-called golden era of rap and yet has found the most success (and best music) of his career during the last few years. They ignore the fact that Mos Def has dropped twice as many albums in the last 3 years than he did during the entire 1990s. They ignore the fact that guys like Chamillionaire and Ludacris have been putting out substantive songs that actually get radio play and sell records. I could go on and on, but the point is that I’m tired of hearing about what’s wrong with rap and who’s to blame. S.E.L.F. is another act convinced something is wrong with the rap game and that they are here to change things. In the spirit of playing the blame game with them I’ll lay out who’s to blame for this CD.

First up, the Wu-Tang Clan has to absorb the biggest blame for S.E.L.F. and every other group that has decided to go with abstract rhymes since 1994. Through no fault of their own, the Wu-Tang Clan’s massive success in the 1990s has led countless emcees to believe that they can away with spitting rhymes that only make sense to themselves. The problem is that for the most part, the verses of all 9 members of the Clan made sense. Whenever you were caught scratching your head after a Wu-verse either you hit the encyclopedia or you realized O.D.B. was blazed beyond comprehension. All members of S.E.L.F. wish they could drop verses like the Wu and they try their best but for the most part you’re left just scratching your head. “War Child” eventually mentions something about parents sending their young away to war, but not before a minute of:

“Vindication of the retaliation against these devil’s advocates
Avenging the acts of jihad, men posing the will of God on third world countries
That’s not civilized, that’s savage beast pounding on the chest of the weak
Into submission, I brings the terror and tracks into the Holy Land
Natural reactions of survival of one’s rival
Political guerilla tactics, never admitting but tipping the cup”

It’d be great if these guys could finish a sentence and/or thought instead of leaving it up to the listener to complete their thoughts. The Wu also has to take the blame for putting out album after album from Wu-affiliates who had weak flows and wack styles since that too encourages otherwise lackluster rappers to keep rapping despite having weak flows. Two guys on here have halfway decent, but boring flows and the third guy sounds like he’s struggling to let the words out. While I’m still playing the blame game I have to give props where props are due and Nas gets his due for the publicity stunt that was “Hip-Hop is Dead.” Thanks to him guys like this feel justified in feeding us the self righteous propaganda contained on this CD.

Not everything is bad though as the beats on this CD are for the most part on point. For that I blame Stoupe of Jedi Mind Tricks since if it wasn’t for his beats JMT would be nowhere near as popular as they are. If they weren’t as popular then chances are acts like S.E.L.F. would have never heard Stoupe’s work and never known to bite his style. This is the one good thing on the album as the beats are at the very least entertaining and some are very good. The entire album has a dark vibe, but it works for what the group was trying to do. Not surprisingly my favorite tracks ended up being “Profits” and the title track since there is absolutely no rapping on them. On those tracks we get a dope beat and some old political speech playing over it. Nothing original but it’s good to listen to and would be nice as an interlude on a better album.

To finish up all the blaming I’ve done, I gotta blame myself for how I perceive this CD. Chances are if I didn’t listen to so much music in any given week this would sound a lot better/fresher than it does now. So chances are your perception of S.E.L.F. might be a little better if you don’t listen to as much music and you subscribe to their beliefs. The kids have some promise and definitely are talented musically, but for the average rap fan the product is too convoluted and rough to be of much enjoyment.