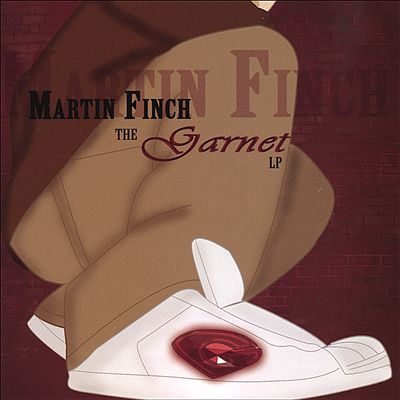 A garnet is a precious stone, one that, if found in a deep red color (which I assume is rare – yes I had to look this shit up), is used as a gemstone. Halifax emcee Martin Finch, for one reason or the other, saw fit to use this f’n rock as a theme to his album. Perhaps Finch is a “diamond in the rough” as an emcee?

Finch, who sounds sort of like a better-enunciating Cappadonna, is aided by a band of guests throughout the listen, including producer/rapper Whitemic, who sounds very much like a deeper-voiced Eminem. Things start off on a relatively high note with “Friday Night,” an intricately-arranged, blue collar narrative, but from a personal standpoint it quickly bogs down from there. “Da Cipha” is an extremely cheesy, take-it-back-to-the-basics beatbox type of track, complete with a mediocre lineup of “freestyles.” When the beatboxer switches the beat up to Dead Prez’ “Hip Hop” it is pretty cool though. “Dreams” is a nice try at a journey through Finch’s dreams, but is far too linear in execution. The embarrassingly corny criticisms of hip hop feuds on “Beef” prove that when Finch keeps to speaking about himself, he’s much, much better off.

Things eventually pick up again, dramatically, but continue to fluctuate throughout. “These Eyes” is a standout track in the form of a hilariously detailed narration of Finch and guest Classified’s mischievous youths, trading bars on such things as only being able to afford beer runs. The beat is quirky and perfectly complimentary. Producers Classified, Whitemic and Boy-Ill consistently churn out DITC-esque, hard hitting beats, normally utilizing slightly off-kilter loops and dusty drums, but the beats lack originality and hold little replay value.

The frustrating over-saturation of what are mostly useless, annoying skits does wonders to break the album into little, bothersome fragments – it’s a feat that Finch is able to get things back on track as often as he does.

Martin Finch has a lot of things going for him, but his successes are often a product of style over substance – which is to say, it’s a dirty, dastardly stylish. In the hands of the wrong emcee, the rhymes would sound overly generic – senseless disdain for platinum-selling emcees, second rate battle jabs – it gets messy. At its height, “The Garnet LP” works as an interesting look in the mirror, through the eyes of a passionate, self-depreciative emcee, but the lows (clichÃ©d battle rhymes) do what they can to weigh it down. The good outweighs the bad, but the bad is rushed, clichÃ©d and beyond boring. Finch is a more-than-capable emcee, but his rhymes couldn’t change the unfortunate arrangement of the album. He may be a diamond in the rough, but he still needs a good polishing.