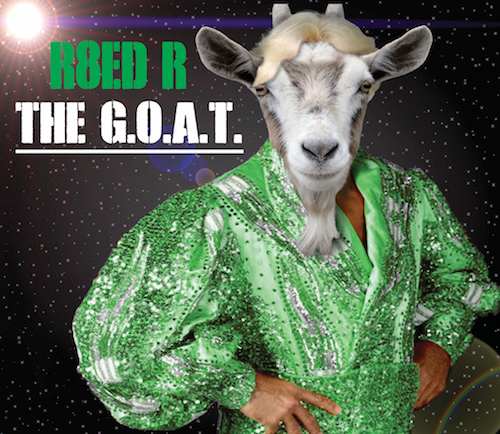 You may have noticed that I mentioned R8ed R in a previous Mega Ran & Lynx Kinetic review, but that was far from my first experience with the rapper/wrestling fan. We had crossed each other’s paths for the first time when I heard a song he sent to Wrestling Observer for one of their podcasts, and was instantly struck by the quality of his flow and depth of his knowledge of the grappling arts. Sure every now and then you can get your one off hip-hop references to the squared circle from GZA (he breaks backs like Ken Patera) or Nine (he has a temper like Rowdy Roddy Piper) but few actually break it down and drop them bar after bar or do a whole song about sports entertainment. The aforementioned Ran does from time to time though and on “The G.O.A.T.” we’ve got R8ed R doing the same.

The album’s cover art and indeed intro skit are both playing on the theme of “Nature Boy” Ric Flair being regarded as one of the all time best to ever perform in a ring, playfully dressing up a “goat” in one of Flair’s signature robes. He might not appreciate the humor but I certainly do, just as much as I appreciate Mega Ran returning the favor and making a cameo on “Mega R8ed.” R’s tracks are self-produced so I’m guessing that he probably got a tip or two about looping up Capcom’s chiptunes, and probably an assist on the clearance so they wouldn’t have any issues down the road. The bars and the thumping drum track overpower the music just a little but it’s not really a deficit since you want to hear everything that they spit on the track.

One of my favorites though has to be “R8ed Bomaye,” which refers to Shinsuke Nakamura’s finisher (now called the Kinshasa in WWE) and also samples his signature violin music for his entrance. Nakamura is not the only wrestler who gets a nod on the bars though as you can see from the quote below.

“More Flair flows over the violins
I build the beats up, PUNCH the lines in
You’ll never see the day my supply of designs end
Tye Dillinger, watch flow, rhymes is times TEN
with these Avatar bars, mines is time bent
Can’t see me in my zone my shine’ll blind men
and, I don’t gotta convince ’em, e’ry piece is beast slay
Spit it like Shinsuke”

There’s plenty more where that came from though, as the equally dope “gRReen Ambrose” takes an idea I never would have thought of and ONLY loops the motorcycle from Dean’s entrance song. It works incredibly well, as does dropping down the speed on Bull Nakano’s “Orient Express” and then laying down the bars on the song named after her. That’s part of why I dig R8ed R though. He’s not just a Johnny-Come-Lately wrestling fan, and there’s nothing wrong with being a new head if you’re just now getting into the arts, but this Far Rock rapper didn’t start with The Rock. He’s “from the school of hard rocks” and “spitting it for diplomas” all while referencing Akira Hokuto. Many of you probably won’t even know her because she only had a two year run in WCW and did the majority of her best work in Japan, although Nakano only had a couple of small stints in WWF herself. If you know the fact the two had a match rated 5 out of 5 stars (almost the highest honor a wrestling match gets) in the Observer in 1991 though it’s even more appropriate that R name checks her in a Nakano song.

So I’ve given you the good news about R8ed R, a rapper who correctly brags that “nothing you’re hearing is accidental” on “The Heel and The Villain,” and he’s somebody I’m going to continue to listen to and support going forward. The flip side of the 40 minute album is that it’s entirely self-produced and at times (no offense meant R) it shows. The mixing is all over the map. On a track like “Beverly” it’s just about there, and on a track like “Mastodon Music” the elements are technically correct but the song still fails to boom and pound. I don’t mind the sampling of wrestler themes and the constant bars about wrestlers but for some listeners there is a potential for overkill, which may be why the aforementioned GZA and Nine never dropped entire wrestling albums and even when Ran does it they tend to be on the short side. I still think R8ed R is going far in the rap game, but what I really want to hear next is a NON wrestling album with some outside production that can take him to the next level.