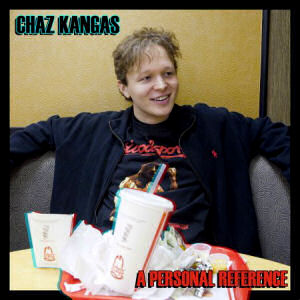 Rappers often claim to be something they are not. There are countless emcees who spit about bringing back the old school and keeping “real hip-hop” alive, when in fact the actual quality of their lyrics is subpar at best. On the other hand, there are rappers who boast about popping bottles, screwing models, and everything in between, and while these assertions may be true to some extent, listeners must take them with a grain of salt. All in all, there are too many rappers talking about keeping it real who in reality are more fake than a bootleg Rolex watch from a street vendor. Enter Chaz Kangas, an up-and-coming battle rapper who reps his birth place of Minnesota and his current hometown of New York. Chaz doesn’t claim to be the best rapper, or even the best white rapper, but “A Personal Reference” is, in my mind, the very definition of keeping it real. He simply tells it like he sees it, spinning straightforward but often humorous stories of his daily life and encounters, and his fresh perspective on hip-hop makes his latest release an enjoyable listen.

The album cover art says it all â€“ a picture of Chaz, looking like he just rolled out of bed, leaning back with a tray of devoured Arby’s food in front of him â€“ and the opening track, “Young Gifted, and Chaz,” reinforces the casual, carefree vibe of the album. Chaz receives a phone call, most likely from the album’s sole producer Good Goose, who asks “Hey Chaz, you wanna make an album?” Chaz responds with “Yea, let’s do it right now,” and transitions right into his opening verse, a quick autobiography where he raps “A townie mindset with an urban perception/ Here to take the game in a certain direction.” Right off the bat, it is clear that “A Personal Reference” is not your average underground release, and the rest of the album follows suit.

Chaz isn’t afraid to get creative and stray from the typical hip-hop album blueprint, and the subject matter he raps about on “A Personal Reference” is testament to this. “Gary” is a song about man’s best friend, as he reminisces on the good days spent with his lovable canine. With lines such as “In Long Island, cats always wiggin’ out/ But dawg, my dog Gary got it figured it out,” it’s hard not to chuckle, and Good Goose lays down a catchy chorus over fast paced drums and pulsing synths to round things out. “Best Vomit Ever” features Chaz rapping about his latest upchuck (clam chowder and an Arnold Palmer, in case you were wondering), and while the track is barely over a minute long, it is still one of the funnier storytelling episodes on the CD. Even more unusual is the interlude “Ducks Fly Together,” which features a sample from the classic movie “Mighty Ducks,” but with the dialogue altered to include Chaz and Good Goose. Strange as it may sound, I found myself laughing out loud as Chaz’s lines interrupted the otherwise serious movie scene.

Of course, “A Personal Reference” features a number of more traditional, though equally witty, tracks as well. “Scrambled Eggs” has an aggressive driving electric guitar and a heavy set of drums that lace the track, although Chaz is admittedly overshadowed by an impressive verse from guest artist Mac Lethal. “High Powered Power” pits an upbeat drum loop over a catchy bassline, giving the track an overall feel-good vibe as Chaz urges “come on everybody let’s have some fun.” “June-to-Labor Day” sees him take the role of the paranoid boyfriend, as he worries that his girlfriend, who seemingly has an excuse for everything, is still involved with her ex. And on “Truth ‘N’ Stuffz,” Chaz offers a critique of the seemingly endless number of government conspiracy theories, rapping:

Chaz Kangas may not be the most naturally gifted emcee, but what he lacks in lyricism he makes up for with his creative and often humorous rhymes about seemingly everyday topics. For the most part, his delivery meshes well with Good Goose’s production style, and it is clear that Chaz understands his place in hip-hop and sticks to rapping about what he knows best. He doesn’t try to be something he isn’t, and in a rap game that is often muddled by exaggerated claims and glorified accounts, it is refreshing to hear an artist who doesn’t fall prey to these mainstream influences. Hip-hop fans looking for a change of pace should not hesitate to give “A Personal Reference” a listen. It may not be for everyone, but his comical and laid back attitude will undoubtedly appeal to a number of listeners seeking something out of the ordinary.