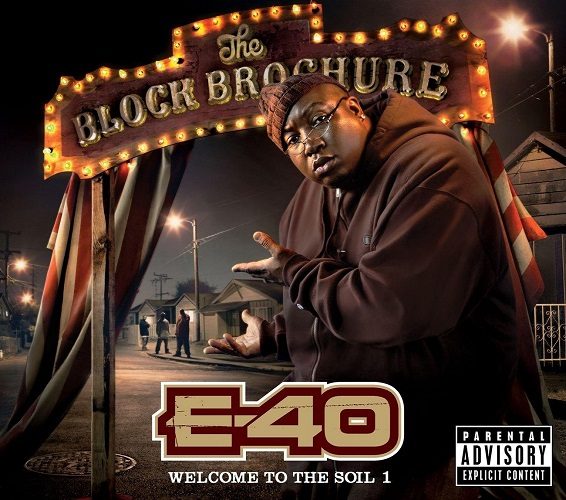 “Inconceivable!” Yes, I hear Wallace Shawn in my head when I type that, but it’s the only way I can react to E-40 dropping THREEalbums at once. It’s not as though 40 hasn’t earned the right to. Earl Stevens is a 20+ year veteran of the hip-hop business who dropped his first EP in 1990, who subsequently made a splash in 1993 when Jive picked up his Sick Wid It label for distribution and made “Revenue Retrievin'” set on the same day in 2010. This is three albums though, all in one day, all at one time. “Inconceivable!”

Supporters of E-40’s hustle and grind don’t come much bigger than me, but 60 songs worth of music (if you include bonus tracks) is just too much for me to deal with in one week, let alone one sitting. Therefore I’m going to tackle this the only way I can – one album per week – as though E-40 had released each of them separately over an extended span. We open the series with “The Block Brochure: Welcome to the Soil 1.” Actually by the time we get to the second and third volumes, there really won’t be any point to the subtitles – unlike “Revenue Retrievin'” it doesn’t change from one release to the next. Things get off to a good start on “Fast Lane,” an electronic echoing bass laced affair where E-40 spits some trademark street knowledge to the youngsters listening, in the way that only he can:

“Uhh! Livin the life in the quick lane, only the strong can survive
These streets’ll swallow you up mayne, and eat you alive
Cain’t be no poodle, run tuck yo’ tail and hide
They’ll spaghetti yo’ noddle mayne, +Element of Surprise+
It’s goin around mayne! Death in the air
Better not be scared, cause ay-henas can smell fear
It’s not a lot of love but it’s a whole lot of hate
Beware of your surroundings, they starvin, they ain’t
The lake of fire awaits for those with no souls
Hot like a stove, hotter than hot coals
Not a knock on the server, got hella clients waitin
Fuck the FDA, the Food & Drug Administration
That’s the thought process of a soil soldier”

As E-40 albums go it’s got the usual amount of guest appearances; mostly locals and family affiliates but a few outsiders find their way into the mix. In the former category is his son Droop-E on “Rollin’,” “Bust Moves” and “Mary Jane.” Don’t scream nepotism though – he’s actually talented enough in his own right to justify it and he’s been making these cameos for a while now. It’s also no surprise to see Click member B-Legit on “Outta Town,” one of my favorites on this first volume, featuring a catchy hook that’s sung by Laroo T.H.H. He’s also on the G-funked out track “Cutlass” along with Richie Rich, a swanger produced by Mike Mosley and Sam Bostic. Other Cali affiliates include The Jacka on “In the Ghetto,” Mistah F.A.B. and Turf Talk on “In This Thing Breh,” and singer Michael Marshall on “Help Me.” Actually “Rollin'” is like an all-star Cali posse cut, as it includes Mugzi from The Mossie among others.

The outsiders to the Cali scene wind up on some pretty nice tracks in their own right. 2 Chainz and Juicy J are both on the hypnotic Bangladesh beat of “They Point,” and coincidentally former Three 6 Mafia member Gangsta Boo is on the enjoyably crass “Let’s Fuck.” Since the only other notable non-Cali native is Newark’s own Raheem DeVaughn on the aforementioned all-star Cali cut, let’s take a look at what Earl Stevens has to say on “Let’s Fuck”:

“Uhh, sheeit! I’m feelin right right now
Lookin for the right bitch to pipe and take down
Let me pound that cake and put some cream on it!
Yeah I like it but I ain’t gon’ put a ring on it!
I’m tryin to hit the back of the cervix and make you shake like ya nervous
Merk that shit without the funeral service
You got my, dick hard lookin just like a banana clip
Throw it back and I might go down and take a lick”

That’s the magic of E-40 really – he manages to be both comedic and hella serious at the same time. The metaphoric imagery may cause you to laugh, but there’s no question Earl really is horny and wants to get in that ass. There’s also no question he’s ridiculously skilled in his flow, which he shows off on “What’s My Name” by quickly spitting the phrase “po’ politics, poverty puzzlin, pieces pertaining paper, proceeding profit pocket, per diem prosperous promise/puttin the P’s in the pocket, proof in the pudding.” Other than perhaps Twista I can’t think of too many emcees who could pull off that string of alliteration without mangling it to all hell.

Ultimately the first edition of “The Block Brochure” is almost exactly what one could expect from an E-40 album, and if you already knew his steelo going in that’s good news. On the other hand if you’re a newcomer to his hustle you’d have no idea why to pick this album over the other two, let alone why three at once are so necessary. Web videos have been released for “Fast Lane” and “They Point,” but I don’t really view either of those as having crossover potential – they’re just to satisfy his cult following of fans. And in fact that’s the point – E-40 is satisfying a legion of followers who have been built up over that 20+ year span in the rap game. He’s not going to reinvent the wheel with songs like “Can You Feel It?” but the old school soul samples and “mannish” lyrics aren’t going to offend the loyal soil listeners. It’s a solid album. I can’t tell yet if the next two volumes will be more or less worthy, but at least for the first one he’s off to a good start.