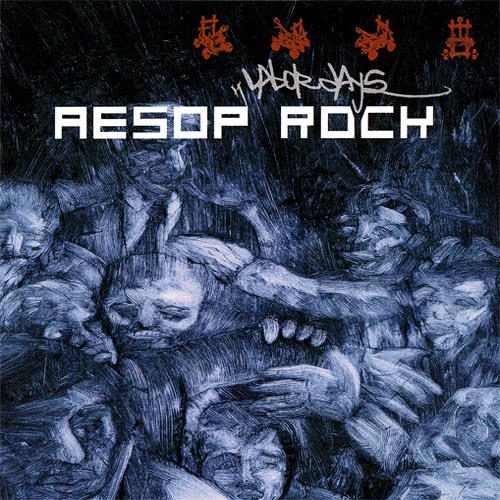 Aesop Rock is on some Goldilocks and the three bears shit. His first two efforts, “Music for Earthworms” and, more notably, “Appleseed” were both pioneering classic releases, but both suffered from being too small. “Music for Earthworms” was too damn hard to find to be well known and “Appleseed” was just too damn short. At 8 tracks (the first being a minute and a half intro) Aesop Rock gave you just enough to get you extremely hyped about him and his cello-sampling cohort Blockhead and then leave you hanging. “Float,” his full-length debut on Mush Records, was too big. The beats were more dramatic with more strings, synths and lush musical canvases and the underlying lyrical meloncholy that haunted the listener the first time around came back stronger like a bottle of Zanax. “Float” had its share of bangers and it’s guest list of Vast Aire, Dose One and Slug was a short who’s who in smart rap. But despite the dopeness of “Big Bang,” “How to Be A Carpenter” and “Attention Span,” there was just too much of everything to keep “Float” in rotation for very long.

Ironically, I wasn’t really feeling “Labor Days” the first few times around, maybe because “Labor,” the droopy second single didn’t live up to “Coma,” the bouncy lead track that dropped this summer. But what I did find was that, although I liked “Float” better on a song by song comparison, I could listen to “Labor Days” front to back much easier, and, while I repeatedly taped over other LP’s for car listening, Aesop Rock stuck around. “Labor Days” is, um, just right.

It’s definately longer than “Appleseed,” at a normal 14 tracks and no intro, but unlike “Float,” which had to be crammed on a normal 74-minute CD, “Labor Days” fits, with space left over, on a 60-minute tape. The guests are more impressive than the first time around, but the recent collabs with Illogic and C-Rayz Walz seem a little less forced than, for example, Aesop’s dadist ramblings against Vast Aire on some battle shit. The beats are more straight-forward than before, mostly abandoning the faux southern bounce that sounds worse every time Sage Francis raps over it, for a variety of styles. Blockhead is still dope, but has come miles from the monotony of parts of “Float”; his versatility is clear in the contrast of the melodic “Daylight” and the unique drag of “Save Yourself.”

Lyrically, Aesop Rock is still struggling to find his place. While the next shit on “Appleseed” and “Float” was what got him props at first, he showed potential on topic with “Basic Cable” and “6B Panorama” on his sophomore effort. He explores this space more here, with classic results on “9-5ers Anthem” and “No Regrets.” Meanwhile, his old style still comes through on tracks like “Flashflood” and “One Brick” (bringing back his old building theme), but is wearing thin on “Shovel” and “Boombox.”

While Aesop Rock has been a true indie success story, his successive releases have taught an important lesson, that an artist must think not only about the individual tracks he puts on his album, but also about the album as a whole. This is something that incredible rappers who break out with mediocre collections of old material, b-sides and guest spots (Apathy and 8-Off come to mind), should take into account. While “Labor Days” isn’t perfect it is definately the underground Ghostface’s most satisfying release to date.