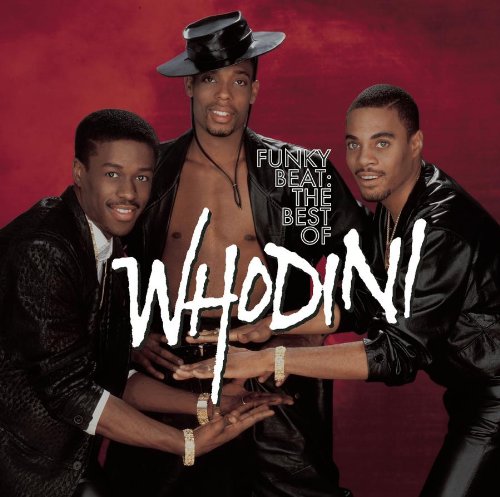 Internet radio is being driven out of existance by the corrupt power triangle of the FCC, the music industry, and the corporate broadcast titans like Clear Channel. That’s a damn shame because without old school hip-hop mix shows online the only other venue to hear classic Whodini songs is Back to the Lab review though despite the old school nature of the hip-hop artists involved. This album was released by Jive Records in 2006, just a year short of their 25th anniversary in hip-hop. That’s the irony – 25 years ago the internet as we know it barely even existed. To be sure computers were exchanging information over long distances at businesses and universities but none of the recognizable qualities we identify with the internet like the World Wide Web existed. Therefore today’s nostalgia for Whodini dates back to a time when to hear them you had to live in a large metropolitan area with a strong hip-hop scene. Either ONE FM station played hip-hop (usually mixed in with R&B) or the club and party DJ’s broke new records that became hot commodities among the youth (and I do mean VINYLrecords in the most literal sense).

Today’s rap generation who were born in the late 80’s or early 90’s won’t even recognize the names Grandmaster Dee, Ecstasy and Jalil Hutchins but any hip-hop head from the age of 8-18 between 1982 and 1987 knows that Whodini was all the way live. Even in a desolate backwater of hip-hop music and culture like the rural midwest the popularity of Whodini spread like wildfire. It didn’t hurt that the group had a catchy name, pronounced just like the stage name of famed magician Harry Houdini. Their string of successful LP’s was magical too – in an era where very few rap acts had major label deals or gold selling albums Whodini went platinum TWICE. It was no accident that Whodini’s style of hip-hop captivated a nation and made them a big concert draw on ‘Fresh Fest’ hip-hop tours. Producer Larry Smith created a simple yet catchy style of electro-funk that still resonates even in 2007, as scores of hip-hop artists have sampled or remade Whodini’s hits into modern day rap attacks.

It doesn’t take long listening to “Funky Beat: The Best of Whodini” before the rap examples become obvious. “Friends” has been chopped up a dozen different ways from underground hip-hop stars like MF Doom to crossover platinum rappers like Nas. One quick cymbal hit leads into an overpowering bass drum, which repeats itself again with vicious intensity. Tss BOOM – CLAP – da BA BOOM-BOOM-BOOM – CLAP. This pulsating rhythm dominates the track for the first 20 seconds before Whodini arrives to sing the song’s refrain: “Friends! How many of us have them? Friends! Ones we can depend on.” The song keeps layering up bit by bit as the opening rap verses start, first bringing in a simple bass backdrop, following it up with a tinkling piano-esque high synth, then funking it up with a whole new electric groove and percussive clap. From there the structure is varied and kept interesting throughout but the theme of misplaced trust remains the same from one rapper to the next in the group:

But as she shook your hand, she stole your man
And it was done so swift, it had to be a plan
Couldn’t trust her with cheese, let alone your keys
With friends like that you dont need enemies

You wonder how long it was all going on
And your still not sure if your man is gone
You say, well if she took him he was never mine
But deep inside you know thats just another lie

And now you’re kinda cold to the people you meet
Cause of something that was done to you by some creep
But nevertheless, I’ll say it again
That these are the people that we call friends”

“Friends” is just one of many songs included from the best selling 1984 album “Escape,” an album which is long overdue to be digitally remastered and reissued with bonus tracks and instrumentals. Too $hort and Luther Campbell probably owe a huge career debt to Whodini for “Freaks Come Out at Night,” the song that kicked down the doors of hip-hop sexcapades all while mysteriously throwing out quarterback audibles: “HUT ONE! HUT TWO! HUT HUT HUT HUT!” Nevertheless everybody who has ever referred to a woman seductively shaking her hips to a rap song as a “freak” should put a nickle or dime in their Whodini jar right now. Quite frankly I don’t even know where to begin when discussing just how damn fly “Five Minutes of Funk” is so I’m just going to let Jalil Hutchins do it for me:

“Now the party didn’t start ’til I walked in
And I probably won’t leave until the thing ends
But in the mean time and in-between time
If you work your thing then I’ll work mine
We came here together so we could have fun
Me and you baby goin one on one
Now this is the last chance for us to get off
So either get loose, or you ought to get lost
Cause I’m just about ready to do my thing
Cause I’m the stone cold, New York, rap machine
I’ma give you what I got, and baby that’s plenty
And never has one man rocked so many
I’ma make you wet then make you sweat
Just to see how funky you can get
Now when I’m on the mic, I do serve well
And I go by the name of the rapper Jalil”

It’s a testament to Whodini that the songs from “Escape” still hold up well today, and not just for the rappers who have paid tribute by sampling the beats or rapping the lines. It’s amazing how Ecstasy and Jalil showed a flair for non-simplistic rhyme structures and impeccable breath control techniques so many modern MC’s seem incapable of mastering. While “Escape” alone could have comprised this entire album and been just as well received by yours truly, “Funky Beat” expands the scope further and goes all the way through their impressive gold and platinum rap catalogue. “Magic’s Wand” off their self-titled 1983 album was one of the first rap songs to pay tribute to a radio DJ, the famed Mr. Magic and his WBLS hip-hop show “Rap Attack.” Three years later Whodini were already an institution in hip-hop when they scored the hits “One Love” and “Funky Beat” on their third album “Back in Black.” Whodini kept recording throughout the 1980’s into the early 90’s but unfortunately their style started to fall out of step with harder rap artists, be they gun-toting gangsters or militant Afrocentric activists. “Be Yourself” off 1987’s “Open Sesame” seemed CORNY compared to songs like “Straight Outta Compton” or “Don’t Believe the Hype” although it sounds much better removed 2 decades from its original context. By 1991’s “Bag-A-Trix” Whodini no longer sounded like innovators – in fact tracks like “Judy” sounded like a song cloned straight off of Kool Moe Dee’s “They Want Money.” Moe Dee was HIMSELF having trouble trying to stay relevant in the early 1990’s, and the inability of Jive Records to come up with anything stylistically fresh for either spelled the downfall of both as well as of Jive’s reputation as a hip-hop powerhouse.

Nevertheless Whodini did attempt one comeback in 1996 with Jermaine Dupri attempting to usher his childhood favorites into a new era on the album “Six” for his So So Def imprint. The album scored one crossover hit with the quiet storm inspired “Keep Running Back” and then quickly disappeared off the charts, although the song is still worthy of inclusion in this hip-hop retrospective. “Funky Beat” showcases the legacy of one of the most dominant rap groups of their era, ranking right up with Run-D.M.C. and the Fat Boys in terms of their ability to crossover to mainstream audiences while still maintaining their hip-hop credibility. For better or worse the doors they opened brought in a bumrush of newer and harder rappers who shoved them out of the spotlight, and the same mainstream radio stations which once embraced those acts would now think you were talking about the magician and not the rappers if you called in a request (that’s if they even have a human being working in the building and it’s not all automated). Internet radio may be dead, but satellite radio still has a chance. If you have XM or Sirius and you’re listening to the classic hip-hop channel, call in and ask for hilarious tracks like “I’m a Ho” or classic Whodini trash talking like “Big Mouth.” You can’t go wrong with these songs or almost anything on “Funky Beat: The Best of Whodini.” It’s not too late for you to get up on the roots of hip-hop if you were born in the 1990’s – albums like these make everything old brand new all over again.